Dare the government to enforce its unjust laws on abortion 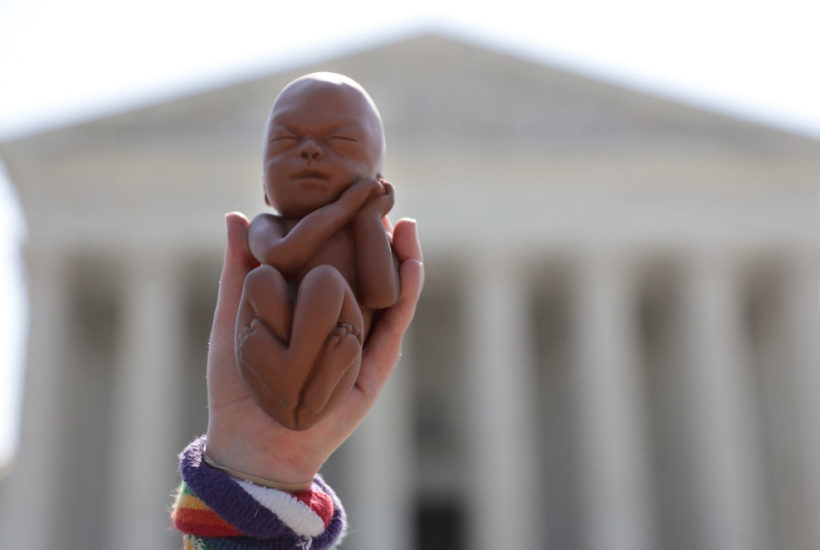 The Supreme Court has ruled in June Medical Services, LLC v. Russo that the dismemberment and removal of unborn human lives was more important than a woman’s right to a high standard of care. From now on, no reasonable person can view the pro-life movement’s strategy — voting Republican, often with noses held and hoping that some future conservative majority will defend life — as anything but a failure. The foul spirit of Anthony Kennedy’s ‘mystery’ has possessed John Roberts and will no doubt possess some other ‘conservative’ host after him.

Matthew Walther suggests a new strategy for the pro-life movement: if you believe that the Court’s rulings on abortion are illegitimate, you should act on your belief. Impose restrictions, even outright bans, at the state-level. Dare the federal government to emerge from the shadow of its penumbras and enforce its unjust laws. Frankly, this should have been done 47 years ago on the day the Roe decision was announced. But this does not mean that there is nothing to be done within the arbitrary bounds drawn by the Court prior to or concurrent with such an enormous act of civil disobedience.

Every conservative state legislature in the country should pass laws requiring the public burial of fetal remains. Last year, the Supreme Court upheld one such law, Indiana’s, when it was challenged by Planned Parenthood. Concurring with the majority’s per curiam decision in Box v. Planned Parenthood, Clarence Thomas affirmed that Indiana had a rational interest in ensuring that no one treated ‘the bodies of aborted children as “infectious waste”’, to be incinerated ‘alongside used needles, laboratory-animal carcasses and surgical byproducts’.

While human dignity demands much more than this, it does not demand less. So far such laws have been implemented or considered by only a handful of states. But they might be essential to reshaping our cultural imagination concerning the humanity of the unborn.

In The Dominion of the Dead, cultural historian Robert Pogue Harrison writes that ‘humans bury not simply to achieve closure and effect a separation from the dead but also and above all to humanize the ground on which they build their worlds and found their histories’. All human habitation and culture originates from the marked grave. ‘It is not for nothing that the Greek word for “sign”, sema, is also the word for “grave”. For the Greeks the grave … was a sign that signified the source of signification itself, since it “stood for” what it “stood in”—the ground of burial as such.’

The Bible says much the same. The dead, Isaiah says, merit yad va-shem, ‘a sign and a name’. This ordering of the word and its subject humanizes the ground and makes possible the experience of place, a site around which human perception is ordered. Burial is also what makes legacy and historical consciousness possible.

Considered in Harrison’s terms, the disposal of human persons as medical waste rather than in graves severs them from legacy, ensuring they will not function as a sema, that no community will find them at its center of meaning. This, rather than concerns over cost, is what motivated Planned Parenthood’s opposition to the Indiana law. Hidden sacrifices have no power to forge solidarity or shape the imagination. This invisibility of the aborted dead ensures they have no legacy of obligation among the living.

It is imperative, then, that the pro-life movement render the deaths of the unborn visible. Giambattista Vico, the 18th-century philosopher of history, held that the ‘order of ideas must proceed from the order of institutions’. Extending the institution of burial to the unborn produces the conditions in which the idea of their humanity might take hold. The sight of a grave or memorial compels us to acknowledge our mortality and our role as ligature between the human past and the human future. And just as an unbeliever’s participation in the rituals of faith enable faith’s genuine emergence, so too our culture may be habituated into someday recognizing its weightier obligations to the weakest among us by fulfilling some small measure of those obligations in the present.

Adepts of the culture of death will no doubt resist this proposal fiercely. When they do, they must be forced to make a positive case for why burial of the unborn is inappropriate. This can be accomplished by including in proposed legislation a requirement that a state assume the cost of burial, as many already do for paupers. Without the crutch of cost complaints, the abortion lobby will be forced to address the question of personhood or else be silent.