Trump goes from one Hispanic cabinet member to zero 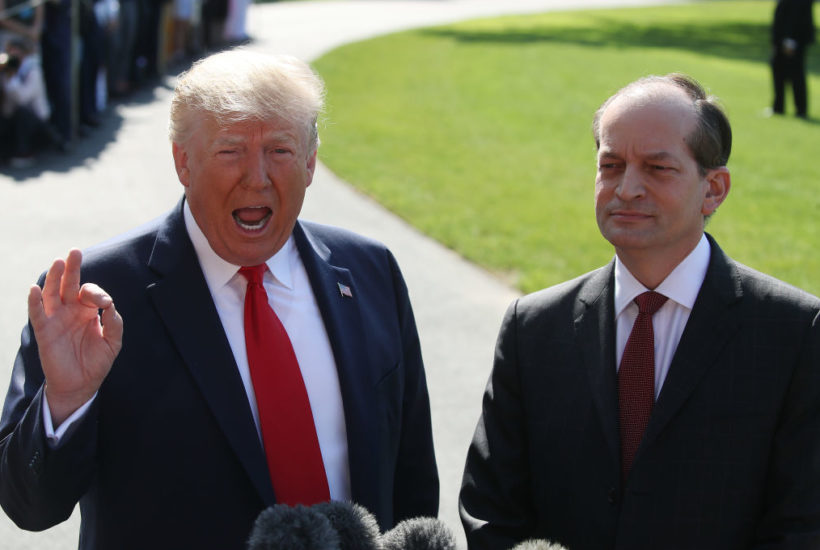 It wasn’t even that laborious a process. Two days after he gave a prolonged self-exculpation masquerading as a press conference to defend the sweetheart deal in Florida that he vouchsafed to billionaire pedophile Jeffrey Epstein 12 years ago, labor secretary Alex Acosta threw in the towel. For Trump the prospect of having Acosta remain was a nonstarter with the 2020 presidential race looming large. Trump was quick to note today that he will miss Acosta, whom he deemed ‘a tremendous talent, he’s a Hispanic man.’ Indeed Acosta was the lone Hispanic member of his cabinet. Trump even singled out an elite school as evidence of Acosta’s bona fides: ‘He went to Harvard.’

According to CNN, this will make for high-level vacancy 261 for the Trump administration. But in this instance Trump may have a successor in the form of acting White House chief of staff Mick Mulvaney. Mulvaney was reportedly unhappy with the namby-pamby approach of Acosta to deregulation. Trump, who has apparently tired of Mulvaney, might well be eager to shuttle him off to the Department of Labor, where he could work to dismantle it. This would of course raise the question of who would become the new acting White House chief of staff, a poisoned chalice if there ever was one.

For Trump, however, the events surrounding Acosta are a mere speed bump. He bragged today that he had tossed Epstein out of Mar-a-Lago, which he ascribes to his ‘good taste.’ Trump went on to defend House speaker Nancy Pelosi against charges from the lines of Alexandria Ocasio-Cortez, who claimed earlier this week that Pelosi has been ‘singling out’ freshman lawmakers of color. Trump was indignant. Here was a chance to defend a woman’s honor, highlight divisions among Democrats, and, incidentally, help inoculate himself against charges of racism. ‘For them to call her a racist,’ said Trump, ‘is a disgrace.’

For Trump, it is all an act. As Susan Glasser details today in a remarkably astute essay the New Yorker, Trump revels in bringing to heel his political foes inside the GOP through his Twitter account, either forcing them to sue for peace, à la Ted Cruz, or to join his team. He remains the impresario of the White House even as his aides shuttle in and out with dizzying speed, seeking, as far as possible, to propitiate their chief. He has an almost unbroken record of enlisting some of the most sordid creatures to ever work in the White House. The only question remaining is who will be the next member of his cabinet to exit in a cloud of disgrace?