The ‘adults’ in the Trump administration are surprisingly childish 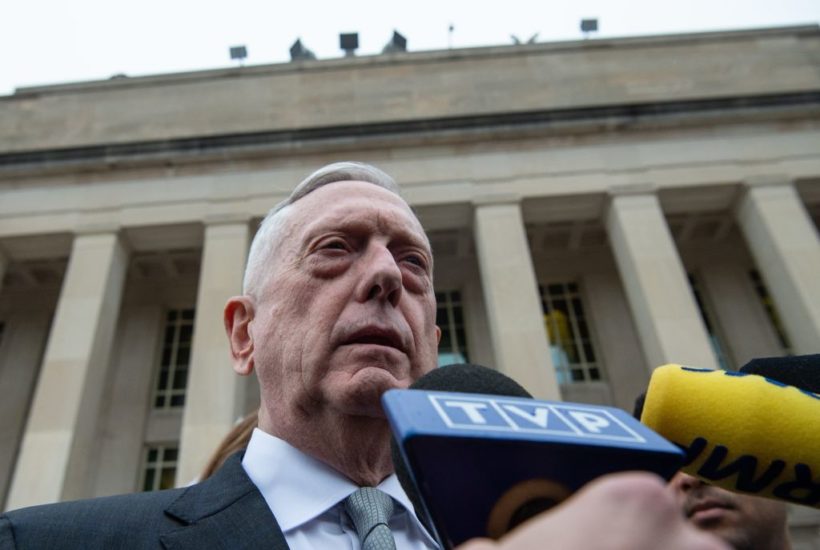 What Malcolm said of the Thane of Cawdor — ‘nothing in his life/ Became him like the leaving it’ — cannot be said of General James Mattis’s leavetaking his position as Secretary of Defense.

Let me first say that General Mattis has long served his country with distinction, betraying immense care for the Marines and soldiers under his command as well as condign fierceness towards the enemies of civilization. As Secretary of Defense, he obliterated ISIS as a fighting force and has overseen the beginnings of a critical upgrade of America’s military infrastructure, which had been allowed to atrophy under the lead-from-behind posturing of Barack Obama.

Like President Trump, I liked the fact that Mattis’s nickname was ‘Mad Dog,’ though I understand he dislikes the soubriquet. After the America-last, apologize-first foreign policy of Obama, it was nice to have a Secretary of Defense with sufficient backbone to compliment the steeliness of a robust Commender-in-Chief such as Donald Trump.

At the same time, I remember several conservative friends expressing reservations about Mattis when his nomination for the post of SecDef was announced. He was, it was widely rumored, a Hillary supporter and, what’s more, his view of foreign policy was much more in line with the Bush-Obama species of moralism than Trump’s ‘we’ll-do-what’s-in-our-national-interest’ pragmatism.

So it was hardly surprising that rumors of Mattis’s imminent departure have circulated at least since last summer. As the Trump administration matured and the President’s policy of ‘America First’ (which does not, as POTUS perhaps neglects to point out frequently enough, mean ‘America Alone’) came increasingly on line in his foreign policy, it was inevitable that fissures between Mattis and Trump would open up.

Predictably, the neo-con fraternity has its collective knickers in a twist over Mattis’s announced departure. Max Boot, who is always good for a laugh these days, epitomized the angst in some recent tweets. ‘Jim Mattis is gone,’ he said in one. ‘God help America. And the world.’ But then it has been obvious for some time that for Max the criterion of a good decision is that it was not taken by Donald Trump.

It should also be said that that even if the President and his Secretary of Defense were in perfect accord about things, it is hardly surprising that a Secretary of Defense should leave after two years. Indeed, by the time he departs, at the end of February, Jim Mattis will have served longer than the last three Secretaries of Defense: Leon Panetta, Chuck Hagel, and Ash Carter.

The sad thing about Jim Mattis’s exit is his grandstanding, not to say petulant and immature, mode of departure. The letter announcing his resignation, circulated yesterday, is half bureaucratic boilerplate (‘I have been privileged to serve,’ ‘proud of the progress,’ etc., etc.).

But those nuggets are set in a jelly of snarky recrimination about how he, Jim Mattis, has always believed that our strength as a nation is ‘inextricably linked’ to our system of ‘alliance and partnerships.’ Further, he says we must treat our allies ‘with respect’ while remaining ‘resolute and unambiguous’ about ‘those countries whose strategic interests are increasingly in tension with ours,’ e.g., Russia and China.

You do not need an advance degree in hermeneutics to unpack the implications of such statements. ‘I, Jim Mattis, am the adult in the room. I want to foster our partnerships with our allies — unlike some people — and I want to be tough with respect to opponents like Russia and China’ — again, not stated but clearly implied, unlike some.

The implication is made all-but-explicit in the next paragraph which begins ‘Because you have the right to have a Secretary of Defense whose views are better aligned with yours on these and other subjects…’ Well, because of all this, I quit. In other words, I am the good guy who wants to reward our friends and stand up to our enemies, whereas you, Donald Trump, do not.

I think there is plenty of room for disagreement and shades of opinion about how the United States ought to conduct its foreign policy. I can understand how Donald Trump’s heterodox behavior and rhetoric raises eyebrows among establishment diplomats. The President speaks a novel language most of us are unused to hearing among politicians. I believe that thus far he has been admirably resolute in his dealings with Russia and China while at the same time regularly reminding us that ‘it would be a good thing, not a bad thing’ to have good relations with both countries. I think that is true, notwithstanding the thuggishness of Putin and the neo-Maoist ambitions of Xi.

In any event, the larger point here is that Secretary Mattis’s letter of resignation exhibits a petulance and smallness unbecoming a man of his distinction, accomplishments, and position. I was sorry to see it. Curiously, however, it was of a piece with the behavior of other former high-ranking officials in the Trump administration. The most conspicuous is Rex Tillerson, Trump’s first Secretary of State, whose chief qualification for the job seems to have been that he looked the part. Since being abruptly fired, he has taken to sniping at the President publicly, an unbecoming and counterproductive habit. The takeaway, alas, is that many of the figures who were hailed as the adults in the Trump administration have turned out to be grandstanding partisans. In the aftermath of Mattis’s resignation, the spigots of fake news are gleefully disgorging dire predictions of ‘global chaos’ and ‘international shock waves.’ The whole spectacle is childish and distasteful, and it reminds us that it is not always as easy to tell who are the real adults in the room as we might think.

An earlier version of this piece contained a reference to a screenshot of a column with a doctored headline that deliberately distorted Max Boot’s position. The editors, alerted to the forgery, removed the reference. I apologize to Max for the error.