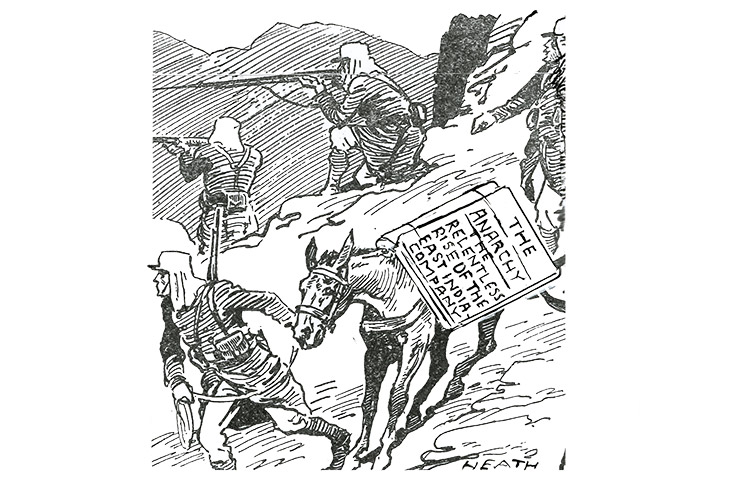 As you glide in to land at the airport outside Algiers, the landscape resembles that of Tuscany: a coastal plain laced with vineyards giving way to low hills filled with checkerboards of olive groves and slopes of newly harvested wheat fields. Beyond rise blue mountains with windbreaks of holm oaks where storks glide into land on their nests atop the minarets of the village mosques. It was while walking in these hills, a week into our Algerian holiday, that we came across a most unexpected discovery. On the lee of a slope overlooking the old Roman town of Tiddis, we found a large round burial monument that looked a little like a miniature version of the drum of Castel Sant’Angelo in Rome, originally built as the tomb of Hadrian. The similarity was perhaps intentional, for the tomb was erected to commemorate a local boy made good, a protégé of that same Roman emperor. Quintus Lollius Urbicus was an Algerian Berber cavalry commander who started his life putting down a Jewish revolt in 2nd-century Palestine and ended his career as prefect of Rome. On the way, he was promoted to a legionary general, maintaining the Rhine and Danube frontiers, before being sent westward to the furthest and most uncivilized extremities of the empire soon after Hadrian’s death. Here he doubled the size of the Roman fortress at Corbridge, conquered Scotland, built the Antonine Wall, before finally becoming, around ad 142, the first African governor of Britain.

We always imagine that the current of colonization runs one way, west to east, but there are frequent reminders in Algeria that history is a little more complicated than this. After all, it was North Africans who did much of the conquering of north Britain for the Romans: Quintus Lollius Urbicus was originally from the Algerian hills above the provincial capital of Constantine, while the Emperor Septimus Severus, Hammer of the Caledonii, was from Leptis Magna in modern Libya. The history of the slave trade is also more complicated in these parts too. In the early 17th century, at the height of the Barbary pirates, the population of the port of Algiers consisted of around 250,000 free Muslims who were looked after and served by 100,000 white Christian slaves. In all, perhaps a million Europeans were enslaved in North Africa at this time. Most of these were captured from the northern shores of the Mediterranean, but around 20,000 were British. These included Elizabeth Marsh, enslaved as late as 1756, who ended her life in East India Company Bengal, and about whom Linda Colley has written a wonderful biography.

As late as 1960 Algeria was home to more than a million French settlers or pieds noirs, including Albert Camus and the young Yves St Laurent. In the bloody 1954-62 War of Independence which ended French rule in Algeria, perhaps as many as 25,000 French and one million Algerians lost their lives in Franco-Algerian fighting, a terrible tale brilliantly told in Alistair Horne’s classic study A Savage War of Peace. In contrast, despite horrific death tolls in Hindu-Muslim violence at Partition and the creation of Muslim-only Pakistan, only seven Brits lost their lives in 1947 during the British decolonization of South Asia. The man to thank for this, more than anyone, is probably Lord Cornwallis, the British general who received such an unfair caricature in the Mel Gibson movie The Patriot. Having surrendered British forces in America to Washington at Yorktown in 1781, Cornwallis was recruited by the East India Company to make sure the same never happened in British India. He achieved this by enacting one simple law which made it illegal, except in very exceptional cases such as indigo plantations or hill stations, for British individuals ever to own land in India. This meant no settler class developed, as in the 13 American Colonies or French Algeria. As a result, in 1947, the last British officials were able to board their ships in Bombay harbor with little more than a backward glance, a regretful shrug and a rush to buy leafy bungalows in Tunbridge Wells.

This week I publish The Anarchy: The Relentless Rise of the East India Company, a book I’ve been working on for the past six years. We still talk about the British conquering India, but that phrase disguises a more sinister reality. For it was not of course the British government that began seizing chunks of India in the mid-18th century, but a dangerously unregulated private company — the world’s first multinational — headquartered in one small London office, five windows wide. India’s transition to colonialism, in other words, took place under a for-profit corporation which existed entirely for the purpose of enriching its investors. Three-hundred-and-twenty years after its founding, with a corporate mogul sitting in the White House attempting to use his dollars to buy whole nations, and with a former chief executive of Exxonmobil recently retired from his position as secretary of state, the story of the East India Company has never been more current.