Americans are paying the price for the rotten meat business 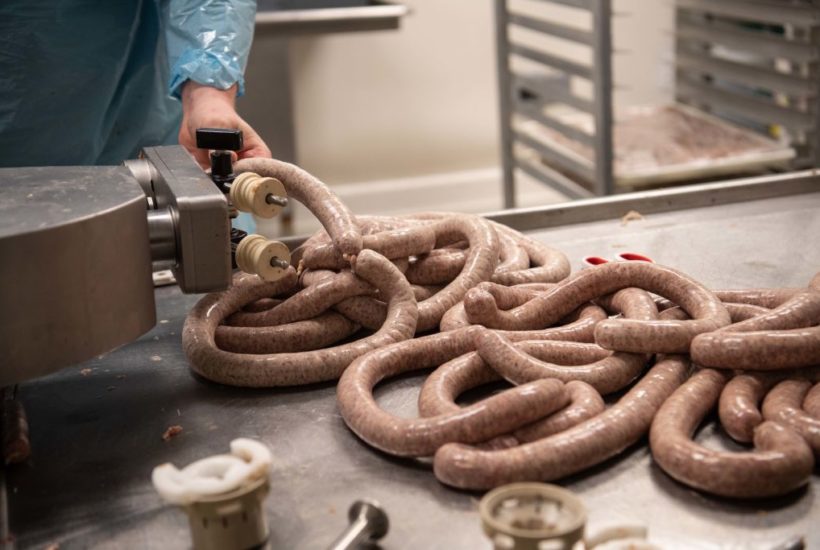 Please don’t make me eat the tofu dog. America has reopened in time for the Fourth of July, but COVID-19 is forcing plant-based mock-meat onto the nation’s festive paper plate. The meat industry’s supply chains are disrupted. Families will be forced to consume tofu, mycoproteins and I Can’t Believe It’s Not Meat at their annual cookouts. This is not the American way — but meat is money. The meat industry, like any other American industry, is being wrecked by corner-cutters and monopolists — and we all have to digest the results.

More than 4,000 meatpacking workers have been infected with COVID-19. Single plants have experienced hundreds of cases. Entire operations have closed down. The closure of major processing plants is creating a ripple effect across the meat industry: farmers have to kill off livestock that can no longer go to slaughter, less meat is available for purchase, and the subsequent shortages will see consumers paying higher prices.

President Trump has attempted to prevent shortages by forcing meat-packaging plants to stay open under the Defense Production Act. While this move eliminates supply chain issues, it also incentivizes companies to continue to ignore workers’ concerns about health. A Johns Hopkins University investigation found that counties with meatpacking plants had double the coronavirus cases compared to the national average. Those numbers suggest the problem extends beyond the plant walls.

Part of the problem is that a few large companies monopolize the vast majority of meat processing. Tyson, National Beef, JBS and Cargill, for example, process more than 80 percent of the beef sold in the US, while Tyson, JBS, and Smithfield process 63 percent of the nation’s pork. Consolidation into giant plants is usually more efficient and lowers prices for the consumer — until a plant goes down, and raises the price of meat. Sens. Josh Hawley and Tammy Baldwin recently asked the Federal Trade Commission to investigate the meatpacking industry for potential antitrust violations. In addition to concerns about monopolization, the senators raise another structural problem in the meatpacking industry: foreign ownership of some of the biggest firms.

‘The current COVID-19 crisis has exposed the vulnerabilities of American supply chains and the importance of ensuring that, when disaster strikes, America’s food supplies are not in the hands of a few, mostly foreign-based firms,’ the senators’ wrote to the FTC. ‘The Commission should ask probing questions about major meatpacking firms’ conduct, pricing, and contracting, as well as how their commitments to overseas interests impact the US market and national security.’

Smithfield was acquired by a Chinese firm, WH Group, in 2013. Smithfield claims it has no ties to the Chinese government, but China’s national bank approved a $4 billion loan for the purchase, and it’s common for Beijing to have a hand in directing ‘private’ businesses. The Chinese Communist party has its own reasons for wanting to offshore its pork industry. The business is notoriously dirty and polluting; rather than tightening up hygiene standards at home, they’d rather just import the final product and risk American workers getting sick and American soil getting contaminated in the process.

Smithfield’s Chinese ownership is even more concerning when we consider the CCP’s deception about the origins of the coronavirus, as well as their stockpiling of PPE while downplaying the threat of the virus to the rest of the world. If China chose to leverage its control of Smithfield during a crisis, the US meat supply chain would be in big trouble.

JBS, a Brazilian-owned company that stands as the world’s largest beef provider, is already proven to be deeply corrupt, yet it still controls a significant portion of the meat supply chain. According to a plea deal with the Brazilian government, when JBS co-owners Joesley and Wesley Batista purchased their first meatpacking plants in the US in 2007, they bribed Brazilian officials to obtain illegal loans.

JBS were also found to have exported rotten meat from Brazil to the US, spraying the meat with carcinogenic chemicals to mask its smell and bribing meat inspectors. This led the US to ban Brazilian beef imports in 2017. The ban was lifted in February after Brazil claimed to have ‘corrected the systemic issues that led to the suspension’.

The Batista brothers were forced to resign from JBS due to their role in the bribery scandal and were ordered to pay the Brazilian government $3.2 billion in restitution. JBS still has not paid the fine, and the Brazilian attorney general is seeking to revoke the plea agreement for breaching its terms, arguing that the Batista brothers did not disclose all of their bribes and engaged in insider trading by shorting their own company on the announcement of the deal.

Despite this history of deceit, JBS have been treated delicately by the US officials who are investigating the company for violations of the Foreign Corrupt Practices Act. The Securities and Exchange Commission agreed to lower a proposed fine on JBS’s parent company for $795.5 million down to $26.9 million because of the pending fine in Brazil. But the fine hasn’t been paid and may even be voided by the Brazilian government. A DOJ criminal investigation into the Batista brothers hasn’t reached its conclusion, yet the confessed bribe artists have wormed their way back into the company after getting a pass to attend board meetings.

Despite JBS’s documented criminality, they’ve been able to expand operations in the US with the help of tens of millions of dollars worth of taxpayer bailout money. Their control of the beef and chicken industry — slaughtering 23 percent of all cattle and 20 percent of all chicken and supplying to Walmart, Kroger, Costco, Publix, KFC, and more — comes with significant safety risks to US consumers and workers that go beyond just the current COVID crisis. In 2018, for example, JBS had to recall 100,000 pounds of beef over E.coli contamination and 12 million pounds of beef over salmonella contamination. They’ve paid millions in fines for workplace safety and environmental violations, including safety violations causing worker deaths. Recently, JBS plants have become hotspots for coronavirus. Workers report they were expected to come to work while sick and were not given PPE.

If Smithfield, which already processes 19 percent of the nation’s pork, can replicate JBS’s success in the US, the American meat industry could be in big trouble. Foreign ownership of meatpacking plants means less accountability to US shareholders, little regard for the law, and unsafe and unsanitary workplace practices. If the monopolists are able to take even more control of the industry, the supply chain issues and shortages experienced during the COVID-19 outbreak are just a preview of what’s to come. Maybe that tofu dog doesn’t look so bad now.