The Democratic nominee emerges heavily wounded from her primary 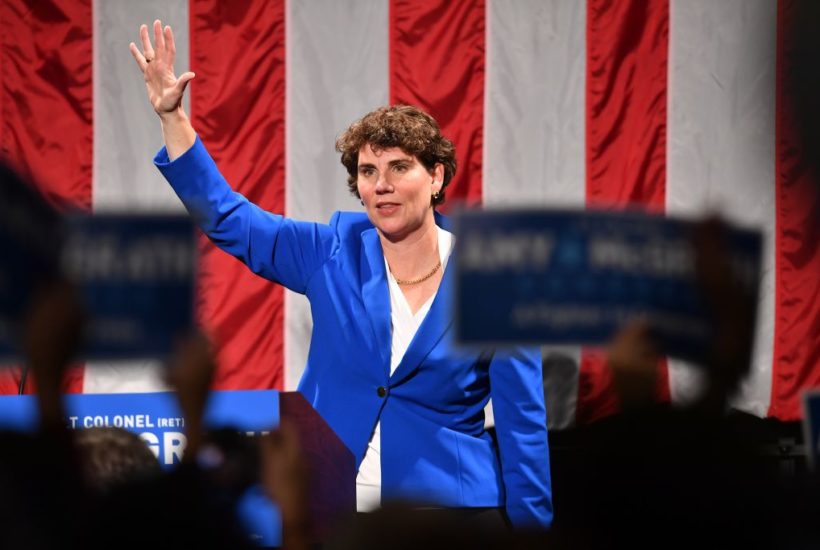 Not that Amy McGrath wasn’t supposed to win Kentucky’s delayed primary for the US Senate seat held by Majority Leader Mitch McConnell. The problem was she was supposed to win in a cakewalk. Instead, she eked out a victory over State Representative Charles Booker, who made a late charge from the impoverished West Side of Louisville during a wave of racial unrest and deadly protests that have wracked Kentucky’s largest city for weeks.

McGrath is a former Marine bomber pilot who lost a high profile bid to unseat Rep. Andy Barr two years ago. It wasn’t long before Chuck Schumer tapped her to run against his Republican counterpart in the Senate. McGrath had already set up a national fundraising network, and with Schumer’s blessing the money started rolling in again — from coast and coast.

After being painted as an extreme leftist by Barr in 2018, McGrath rolled out an oddly pitched campaign strategy. She stunned Democrats when she said Mitch McConnell was being too obstructionist of Donald Trump’s agenda, and declaring she would have likely voted for Supreme Court nominee Brett Kavanaugh. It was a pivot meant to appeal to red state Kentucky voters, but they were statements she was forced to walk back and that created suspicion among state Democrats.

The only serious challenger McGrath seemed to have was popular sports talk show host Matt Jones, who had publicly debated whether or not to run against McConnell for years. Jones even wrote a book about his internal debate, a New York Times bestseller that is part-political memoir and part-Kentucky travelogue called Mitch, Please! In the book, Jones details how McGrath’s campaign manager worked behind the scenes to get him kicked off of his nightly TV show, and how Schumer blocked Democratic polling firms and campaign operatives from working with him. Jones had been an early critic of McGrath’s rightward pivot as inauthentic and a product of over management by campaign handlers.

Jones didn’t run, but McGrath publicly burned a lot of bridges with potential allies and voters statewide who were sympathetic to Jones via his media empire called Kentucky Sports Radio. But with Jones safely out of the way all that seemed irrelevant. There was no real opposition to her candidacy for the nomination. Money was flooding in from around the country to ‘Ditch Mitch’.

With coronavirus lockdowns and a clear path to the nomination, McGrath ran a Biden-style basement campaign, with ads filmed at home featuring her kids and husband in the background. She started pouring cash into ad buys that focused on McConnell. McConnell returned the favor, the primary seemingly a formality.

Then the George Floyd killing and subsequent protests changed the dynamic entirely. In Kentucky, particularly in Louisville, there was a local focus. While the Floyd death triggered the protests, the overriding issue was a Louisville police killing, the death of Breonna Taylor in March.

Taylor was a Louisville EMT who was asleep in bed when Louisville police served a middle of the night no-knock warrant. She was shot at least eight times by plain clothes cops who never identified themselves. Her boyfriend had returned fire and even called 911 for help. It turned out the police had the wrong address, and the man they were looking for had already been apprehended. The case lingered for weeks with no resolution in sight and with seeming disinterest from Louisville’s Mayor Greg Fischer.

As Louisville protests coalesced around the Taylor killing, State Senator Charles Booker began marching with protesters, using the opportunity to highlight his unheralded and previously ignored campaign for the Democratic Senate nomination. It was the traction he needed.

As a candidate, Booker was everything that McGrath was not. He was charismatic, a dynamic stump speaker who made strong voter connections using old-style retail politics in Louisville where most of Kentucky’s Democratic voters reside. Without the money advantage of McGrath (Booker raised less than $800,000 compared to over $40 million in the McGrath coffers), Booker relied on earned media during the protests. When the protests turned deadly, Booker was the candidate on the scene, his image only enhanced in comparison to the ineffectiveness and unresponsiveness of Louisville’s Mayor Fischer.

But other than the debates, McGrath rarely engaged voters outside of carefully crafted ads, and she never appeared at the protests. When asked during the Democratic debate if she had been at the Louisville protests McGrath uncomfortably answered ‘no’. When asked why not, her only answer was she had been tied up with ‘family things’. It was a brutal clip that Booker used to great effectiveness in his most powerful TV ad.

It was then that the dam broke against McGrath as Booker connected with the progressive movement. A flood of state Democrats began endorsing Booker, followed soon by national Democrats like Bernie Sanders and Alexandria Ocasio-Cortez. Elizabeth Warren, who had previously endorsed McGrath, even flipped her endorsement to Booker. Then Matt Jones twisted the knife on McGrath, publicly endorsing Booker in a video sent from vacation. The audio was quickly turned into a radio ad that ran heavily on Jones’s radio show to an audience already frustrated with McGrath.

#AllEyesOnKentucky was the ominous hashtag on June 23, the day of Kentucky’s delayed primary. The nation was watching, the Twittersphere warned. Celebrities were on the case of supposed voter suppression in Kentucky’s primary. Ellen Degeneres, Samuel L. Jackson, Sheryl Crow, even Hillary Clinton, all took to their iPhones to decry the fact that Louisville would only have one polling place for over half a million voters. There was even an infographic each account conveniently shared. McGrath herself had added fuel to the fire by joining a last minute lawsuit to force more polling places, claiming voter suppression if it didn’t happen. The lawsuit was ultimately rejected.

To the outside observer it certainly could seem like a problem. But the primary had been delayed a month due to COVID-19. Kentucky’s Democratic governor Andy Beshear and Republican secretary of state Michael Adams hammered out a plan that allowed for no-excuse absentee voting (de facto mail-in voting), early in-person voting, and day-of voting. Polling locations were severely curtailed out of concerns for staffing, but also to maintain Coronavirus protocols. The result was actually an expansion of voting access, which led to a record number of primary voters.

The mail-in vote plan, however, led to a week-long slow motion release of vote totals as each ballot was reviewed and hand counted. The in-person voting totals were released on election day and were devastating to McGrath. Booker outpolled her two-to-one in many locations. It created a false hope for Booker supporters, but also created a ‘shock the world’ narrative. By far the bulk of voting was mail-in, and as those numbers were released in bits and pieces McGrath climbed back into the race.

Had the primary been held on its original date in May, there’s little question McGrath would have won comfortably as expected and as scripted. But the coronavirus delay coupled with Booker’s ability to capitalize on the Louisville protests created a surge that threatened to drown McGrath’s chances. The surge came too late. Much of Booker’s momentum came just as Kentuckians from around the state were mailing in ballots in the two weeks leading up to election day. It was this early voting that likely saved McGrath who won by around 15,000 votes out of about 500,000 cast in the race. If Booker had another week, he might have pulled it off.

But what Democrats now have is a nominee that many, probably most, Kentucky Democrats don’t want. Almost every prominent Democrat endorsed her opponent although she was the hand-picked candidate. Calls for general election unity will likely ring hollow. In his concession statement, Booker said ‘we’ve proven you don’t have to pretend to be a Republican to run as a Democrat in Kentucky.’ It was a clear shot at McGrath on his way out the door.

A Booker win certainly would have created problems for McConnell. The Mitch campaign has been running negative ads against McGrath for months. Their entire playbook against McGrath was already written — photocopy the Barr campaign but with more money. A campaign against Booker would have required a complete retooling, and would have created a more difficult target. Still, the question remains how well a black progressive from Louisville would have played statewide in a general election, especially in a year with President Trump at the top of the ballot.

Whatever the potential was for a Booker campaign against McConnell, we will never know. But there’s no question that the Majority Leader could hardly have asked for a better final result from the Democratic primary: a wounded nominee who will spend the next few months desperately trying to unite a fractured and demoralized state Democratic party who would have been happier with someone else.