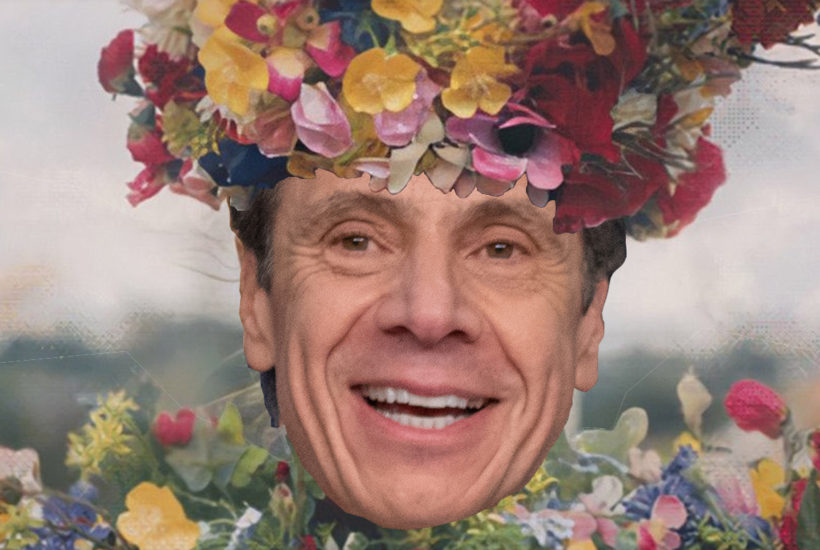 Andrew Cuomo has turned his governor’s office into Pee-Wee’s pandemic playhouse. He has giant cotton swabs and foam mountains that I half expect his brother Chris to pop out from behind, declaring he has once again beaten the coronavirus. Now, for the low price of $14.50, you can purchase an Andrew Cuomo commemorative Summer of COVID poster. It takes a lot to outshine Donald Trump, the king of marketing, whose campaign infamously sold its own line of black markers after the President was busted doctoring a hurricane map with a Sharpie. But Cuomo has managed it, with the help of a complicit media desperate to whitewash New York’s disastrous COVID-19 response.

‘Andrew Cuomo Ascends to the Mountaintop With His Pandemic Poster’ declared the New York Times, which features a ‘boyfriend cliff’, a googly-eyed kraken, Donald Trump sitting on the moon, and Cuomo and advisers sitting at a table with the slogan, ‘New York Leads Again’. Leading in what, exactly? Overall coronavirus deaths? Nursing home deaths and infections? The poster is oddly missing any depiction of dead senior citizens, mass unmarked graves, or visions of rich New Yorkers fleeing the state and infecting the rest of the country at a rate of 65 percent. New York certainly led in those categories.

Here is a high res version of the Cuomo pandemic poster he unveiled today. pic.twitter.com/3LlcewnuOV

There are illustrations of nasal swabs, doomed cruise ships, a tiny hospital and an airplane full of Europeans about to crash into the mountain. There are no Chinese flags, MTA workers desperately cleaning the subway cars weeks after the start of the spread, or CNN anchors yelling at senior citizens in the Hamptons after being caught breaking quarantine.

The poster strikingly represents Cuomo’s psychosis over his mismanagement of the pandemic. Perhaps he is trying to erase the fact that he is personally responsible for thousands of deaths, enough to lead any rational and compassionate human being to a full-blown mental breakdown. He also really seems to hate his daughter’s boyfriend, who is presumably the one hanging from the aforementioned ‘boyfriend cliff’.

Cuomo has expressed delight over his masterpiece, urging potential buyers to ‘see it all for yourself.’ To zoom in on every detail is to lose your very soul. The cursed poster is the totem that greets you upon entering Andrew Cuomo’s personal Midsommar. With every market-tested slogan he could think of — ‘Love. Community. Support.’, ‘The Power of We’, ‘The Sea of Division’ — Cuomo slips further into a state of pure cultish derangement.

The poster is mad enough to elicit a slap on the wrist from CNN host Jake Tapper, but apparently not too far to snap the rest of the media out of its state of hypnotized wonder over New York’s miraculous alleged recovery. The press’s insistence on feeding into Cuomo’s delusions will only further convince him that he is the hero of this story.