What Bernie did, like Trump, was expose the rift between the party’s voters and its leadership 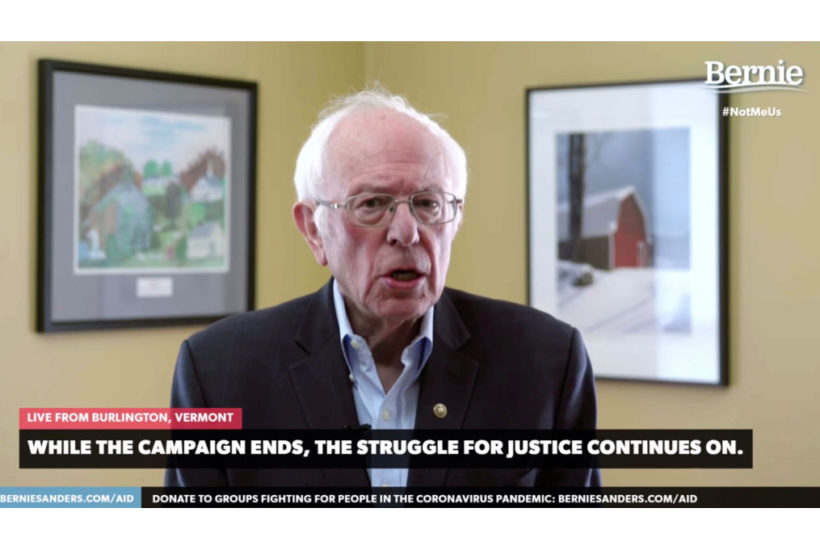 So — it turns out there are no socialists in pandemic elections. Bernie Sanders has suspended his campaign, which in normal times would be major news. Amid the panic of the coronavirus crisis, however, most people won’t be that interested. The still incomplete Democratic primary already feels like ancient history, a relic of the BC (Before COVID-19) time.

Nevertheless, Sanders’s decision is significant. It means that one of the most consequential American politicians of the 21st century will never be president. Sanders has arguably had as great an impact on American politics as Donald Trump. He didn’t ultimately succeed, but his revolution is unstoppable.

It was harder for Bernie to win on a tide of economic anger in 2020 than it was in 2016. If he could again run in 2024 (aged 82), after the post-pandemic crash which seems increasingly inevitable, perhaps he’d rediscover his mass appeal. But the Sanders campaign of 2020 was slicker, more professional, more intelligent in appeals to minority voters. But the radical, revolutionary edge of 2016 was gone.

In a roundabout way, though, the Bernie of 2020 lost because he’d already won. He’d already created the movement that other Democrats now must pay homage towards. Before Sanders’s 2016 run, Medicare-for-All was a dangerously subversive idea. Now every Democratic candidate supports it, one way or the other. It’s often said that Bernie has ‘dragged the party to the left’. That’s not exactly right. What Bernie did, like Trump, was expose the rift between the party’s voters and its leadership. This is in turn has forced the Democrats to come up with ever more inventive ways of speaking his language without fully committing to his agenda. Joe Biden’s policy platform is indeed very similar of Sanders’s. On Medicare, Biden may take a more gradualist approach, but it’s the same end-goal, at least on paper.

And on the Green New Deal, immigration and taxes, Joe and Bernie increasingly sing from the same statist hymn sheet. But moderate voters can support Biden, safe in the knowledge that, like any good politician, he doesn’t really mean what he is saying. Now that he has knocked back Sanders, he can pivot to the center, and just hope the base still hates Trump enough to win him the election.

That’s Sanders’s problem: he was too sincere. Authenticity was at once his great strength and his great weakness. True believers never win in politics.