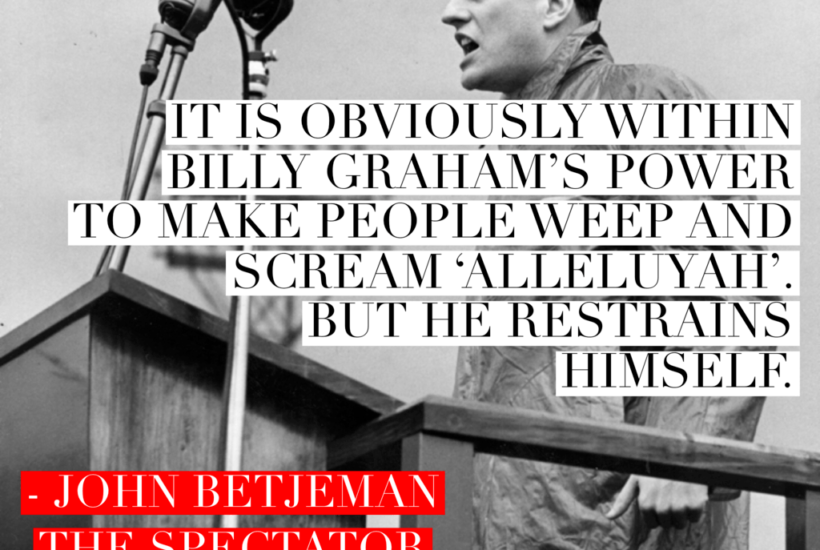 Billy Graham, the American evangelist, has died at the age of 99. Here John Betjeman recounts his experience of attending one of Graham’s Greater London Crusade events, in an article first published in the Spectator in March 1954:

Every night the Harringay arena is packed; every night throngs of converts—mostly young people—crowd up at the end of the service to the bare space below the rostrum, thence to be conducted by ‘counsellors’ to a room where they are interviewed and given tracts. This is the Greater London Crusade of Billy Graham and I think he must be cynical indeed who affects to despise the crusade or doubt the sincerity of its promoters. If only a tithe of the ‘conversions’ are lasting, by the end of the campaign the effect on nonconformity throughout London and the home counties, is bound to be enormous. And Evangelicals in the Church of England who are now enjoying a revival, will also benefit.

Let me say at once, that I write as an Anglo-Catholic to whom the revivalistic approach is unattractive. I think it is necessary to be almost indecently lacking in reticence when writing about the Greater London Crusade, for it is not enough just to describe it objectively as though one were looking at an ants’ nest and remarking, ‘How curious’. I am not shocked by the technique of microphones, massed choirs, trumpets and advertising campaigns. To attract the indifferent today, one must, I suppose, shout loudly at first. But I have no memory of a blinding light striking me at the corner of a street, or of a fit of the shudders while people knelt around me in prayer. I cannot point to a date, time and place and say, ‘That was when I was converted’. I cling to the sacraments and live for the day, have many moments of doubt when the only thing that buoys me up is the thought that I would sooner the Incarnation were true than that it were not. This, at its lowest ebb, is my faith; but frequent confession and communion have proved to me, unwilling though I sometimes am to believe, that prayer works, that Christ is God, and that He is present in the Sacraments of the Church of England. Thus, though I frequently lapse and am rarely exalted, I am conscious of being under divine providence, to use a bit of jargon for which I can think of no clearer substitute, and thankful that I was brought up by Christian parents.

For me the growth of Faith is gradual and not a sudden revelation. I am sure that Billy Graham himself, who is a baptist, would be prepared to understand a sacramental approach to Christ. He is not an emotional speaker, despite his wonderful eloquence. It is obviously within his power to make people weep and scream ‘Alleluyah’. But he restrains himself. He has the great Evangelical love of Our Lord as Man. Jesus as a person is vivid to him. Billy Graham knows his Bible so well and he brings the scenes of Our Lord’s life on ear, so vividly before us, that neither Catholic nor Evangelical could quarrel with him. He is genuinely above religious differences and if any intolerance or quarrelling comes into the campaign, it will not be Billy Graham’s work but the devil; the product of the Protestant underworld of mad sects, or the arrogant uncharity of ultramontanes. The whole burden of his message is that people should return to their particular churches, whether Plymouth Brethren or Church of England. For this reason he holds no services on Sunday in order that people should go back to their own churches.

But what is more impressive than Billy Graham, who is essentially a humble likeable young man who regards himself merely as an instrument of the Holy Ghost, is the preparation and organisation of the Greater London Crusade. For well over a year before it was decided to invite Billy Graham, Nonconformists and Evangelical Anglicans engaged in prayer for the conversion of London. He came at the invitation not of one church, but of many. And a great many of these ‘prayer partners’ are in the Harringay arena nightly, and with them ‘counsellors’, young and old, wearing badges. They have been trained to deal with the stream of converts an to put them in touch with their local churches. I fear that there are few, if any, who are catholics, whether Anglican Roman, among the ‘counsellors.’ This is a pity. But those sorts of differences must matter little to people who, as some of the converts are bound to be, don’t know who Christ was, or what a church or chapel is for. And provided the ‘counsellors’ have the clarity and breadth of Billy Graham I do not think we need imagine that their care of converts committed to them will be misdirected.

Sitting in the arena I could pick out easily the earnest, good organisers, prayer partners, stewards and counsellors of the campaign, even if they were not wearing badges to emphasise their identity. I pictured the vast half-empty chapel on some clattering High Road, the sea of pitch-pine pews, and the few people in them leaning forward in their seats and shading their eyes, as the brave disheartened minister asked for God’s blessing on Billy Graham and his team. I could see the more crowded interiors of evangelical London churches, such as St. Peter’s, Vere Street, and All Souls, Langham Place, and the young nurses and medical students and clerks, also leaning forward, chapel-wise and praying as the clergyman read from, I trust, the Book of Common Prayer. And here they all were, at Harringay, with persons whom they had hopes of converting sitting near them. I foresaw the objectors: the old-fashioned left-wing atheists who sees in it only a plot by American and English businessmen to get the workers to work harder for less money: the smug type, Anglican or Roman, who thinks it all ‘dreadfully vulgar and noisy, my dear, and dangerous too, for how are we to protect the apostolic succession?’; the confirmed pessimist who regards it all as a flash in the pan. I foresaw them. But long before I had even heard of the Greater London Crusade, a friend of mine who is an Anglican priest who often visits America said to me: ‘A man called Billy Graham is being invited to England. He talks sense, though the way it is put over is not the sort of thing that appeals to you and me. You know: ‘Are you saved? See Isaiah 44: verses 22 and 23. But it does very well for people less burdened with sophistication than us. I really think that if he has anything like the success he has had in America, when the history of this country comes to be written in a hundred years, Billy Graham’s visit will be one of the most important events in it’. We shall see whether that is true.

Meanwhile I think all churches should be grateful for the work which is being done for them. I don’t think our own beloved Church of England need fear a landslide yet into it or out of it. People are beginning to think there is something outside what they can touch and see. They are even moving towards the idea of a Creator who cares for us individually. Let the Church go on saying its offices, administering the sacraments, avoiding stunts to fill pews or pandering to the indifference of pampered villagers. Let it not sell all its old churches in the cities to build new ones in the suburbs. In the end the Truth will triumph. And maybe Billy Graham has lessened the time of waiting.