Will black voters abandon the Democrats in 2024?

Biden is struggling with black men and younger black voters 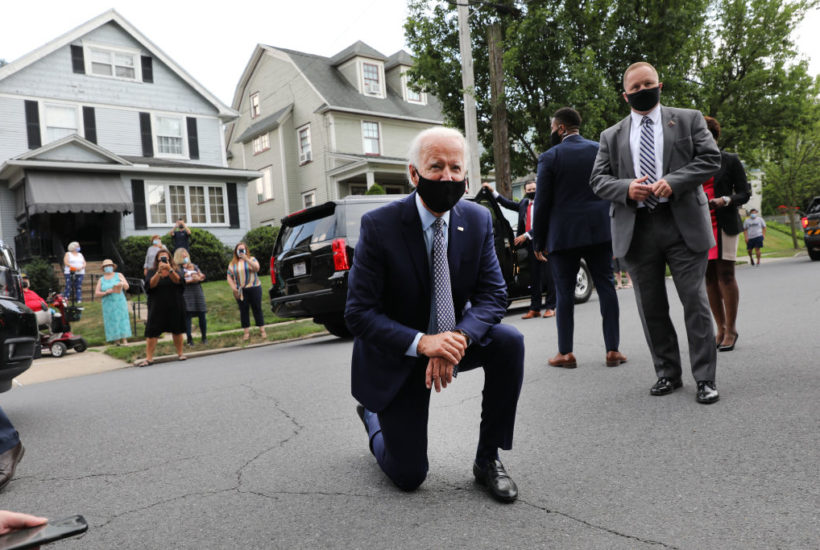 Joe Biden owes his nomination to black Democrats, who never joined the revolution led by Sen. Bernie Sanders, closed ranks around the former vice president, and overpowered the rest of the Democratic coalition to rescue his candidacy. But Biden is struggling with black men and younger black voters and Democrats know the votes of black Americans will become more difficult with each future election.

Many black Americans feel taken for granted by the party and have become increasingly disillusioned with politics and politicians in general. In particular, younger non-white voters consider Biden an out of step relic from an era of leadership they believe failed them on policing and criminal justice, climate, the influence of corporate money in politics, and tolerance of discrimination of all stripes. They are more open to President Trump’s message than party officials could have imagined following his upset election in 2016.

Portland Police Officer: What It’s Like To Be A Black Officer Policing Portland Protests

In 2016, 89 percent of black voters turned out for Hillary Clinton and more could vote for Biden this year — simply because of Trump. There are two reasons: Those who see Trump as an existential threat and are energized; plus, black Americans have been hit hardest by his botched response to the deadly coronavirus pandemic. Nonetheless, 2020 may be the last election for a long time when the Democratic party can expect black voters to show up in droves. Nationwide protests following the death of George Floyd will not necessarily translate into more enthusiasm for Democrats in November, and in fact could make younger black voters feel more removed from a system so stubborn to change.

A recent Washington Post/Ipsos poll found 92 percent of registered black voters said they planned to vote for Biden this fall, but 50 percent of them are doing so to defeat Trump while 49 percent are voting in support of Biden.

Biden has strong backing from black leaders who testify he has walked their walk. As Rep. Jim Clyburn, the highest ranking black politician in America, said in his endorsement before the South Carolina primary, which upended the nominating contest in Biden’s favor: ‘We know Joe. And Joe knows us.’ But Biden also tends to feed the narrative that he expects black support — as evidenced by his outburst on The Breakfast Club, when he yelled at Charlamagne tha God that if the host didn’t know whether to support Biden or Trump, ‘you ain’t black!’

The Trump campaign flooded social media with Biden’s flub and had a website and T-shirts ready within hours. Clyburn admitted, ‘I cringed, no question about that.’ BET founder Robert Johnson told Fox News it was ‘the biggest turnoff I’ve heard from a politician in a long time,’ and said it illustrates an attitude Democrats have about owning the black vote. ‘That, to me, shows you that black Americans are an appendage of a party.’

Johnson, who supported Hillary Clinton in 2016 and is a lifelong Democrat, gives Trump credit for boosting black employment and is undecided in the 2020 election. He said the Black Lives Matter movement should break off to form an independent party, and should recognize their leverage in their ability to swing the election for Trump. Johnson seems to view the Democratic party as a dead-end street for black Americans, saying that ‘no minority group has ever achieved significant power in a two-party system when they are locked into one party and considered unreachable by the other party.’

Tim Alberta wrote about how stunned he was — when reporting his June Politico magazine piece on black voters in Michigan — to find that not only did every single voter he interviewed in ‘the upper crust of Black Detroit’ believe Trump would be reelected, but that a Biden presidency wouldn’t make a difference in their lives.

‘I’ll vote for Biden,’ said one voter. ‘But it won’t matter. It’s never gonna matter who the president is. The cops are still gonna pull me over in my Cadillac and ask me, “How did you afford this car?”’

‘No matter whether it’s a Republican or a Democrat sitting in that White House, we stay chasing that so-called American dream,’ said another voter. ‘But we can’t reach it, because things aren’t even. They never have been. They never will be.’

Older black voters have stayed the most loyal to the party and will likely vote in significant numbers for Biden this fall. They tend to turn out in vastly higher numbers at the polls (just as older white Americans do). In 2016, 71 percent of those over the age of 65 voted, while only 46 percent of those 18-29 did. That drop-off, which helped cost Clinton the election, is what concerns Democratic officials this year when even small margins of voters staying home in swing states could cost Biden the election too. Voters who switched from backing Barack Obama in 2012 to voting for Trump in 2016 were largely white, but those voters who supported Obama and then didn’t vote in 2016 were mostly black. Black turnout dropped between 2012-2016 by eight percentage points.

Those studying such trends say younger voters, more progressive than their elders, expect more from politicians and want the party to change. Chryl Laird, an assistant professor at Bowdoin College and author of Steadfast Democrats: How Social Forces Shape Black Political Behavior, told USA Today that Biden is viewed as ‘a very clear image of a status quo politician within the Democratic party.’

Even a historic choice of a black woman for his vice presidential nominee would not necessarily inspire more votes from progressive black voters for Biden. Some polls show black voters don’t care as much about a black candidate as they do about policies, and a CBS News poll from June showed Sen. Elizabeth Warren topped Sen. Kamala Harris as the preferred choice of black voters by 12 points. A Morning Consult poll showed Warren preferred over Harris by black voters by five points.

Antjuan Seawright, a senior adviser to the Democratic National Committee, told the Wall Street Journal last month the party has had a problem persuading younger black men to turn out to vote and has sought to rectify its lack of success in ‘finding out what motivates them, what gets them up at night’.

While Biden has hewed to the center and chipped away at Trump’s coalition with seniors and non-college white women, he has been criticized by liberal groups for not going far enough in his proposals to change policing, which he said will address ‘the urgent need for reform’. Biden has declared several times he doesn’t support defunding the police.

While challenged by progressives throughout a competitive primary — before his decisive win in South Carolina — Biden’s strength with black voters gave him a foundation for his nomination that none of the other candidates could match. Notably what cemented his standing with that bloc was not only his two terms as Barack Obama’s vice president but the fact that a majority of black voters are not progressives. A Pew Research Center study found a majority of these voters, 68 percent, consider themselves moderate or conservative.

Republicans have made inroads in recent years with black voters on issues like school choice and charter schools, as they have with Latino voters as well.

The Trump campaign, while running a pro-police, law and order message this year, will highlight Biden’s support for the 1994 Crime Bill and its mandatory  minimum sentences that jailed so many young black men, and compare it to Trump’s own criminal justice reform law, the First Step Act, as a means to argue his policies are better for black men.

The President’s campaign also will seek to depress the black vote this fall, as it did in 2016 with help from Russians by focusing frequently on Clinton’s 1996 reference to black youth as ‘super predators’. Using Biden’s past against him with those voters will be much easier than it was with Clinton; given his more than four decades of public service, Trumpworld has plenty to work with. They will remind black voters they ‘ain’t black’, that Biden was friendly with segregationists and spotlight his 1977 comments about how, without sensible busing policies, his children would grow up in a ‘racial jungle’. The quote — ‘unless we do something about this, my children are going to grow up in a jungle, the jungle being a racial jungle with tensions having built so high that it is going to explode at some point’ — is advertising gold. Then there is Biden’s treatment of Anita Hill — a twofer that offends more than one group of voters he needs.

The Democratic party, considerably behind Trump and the Republican campaign apparatus in online prowess, will have to anticipate such attacks and invest in mitigating against them.

Trump was blunt about his efforts to suppress black support for Clinton in 2016, saying after the election, ‘They didn’t come out to vote for Hillary. They didn’t come out. And that was a big — so thank you to the African American community.’

Black voters are far more likely to come out now that they have seen four years of Trump. Many believe the burgeoning racist energy behind the white supremacist movement they have witnessed since 2016 is a threat to their own lives. For this reason 2020 looks like an election — perhaps the last — in which black elders are likely to push their children and grandchildren to get to the polls whether they want to or not because the stakes are far higher than they were four years ago.

Clyburn said in his endorsement of Joe Biden that he wasn’t afraid the way he is now when he was arrested in protests 50 years ago. He told the Washington Post:

And for all voters, the 2020 election is likely to be dominated by the pandemic, and the reactions voters have to the way it has been managed by their state governments and the federal government. The scoreboard for Trump is terrible, and Biden polls far higher with voters in his ability to manage the crisis.

The pandemic has disproportionately harmed non-white America — death rates are higher, and the average non-Hispanic black American who dies from COVID-19 is roughly a decade younger than non-Hispanic whites who do.

Concerns about COVID-19 rate far higher among non-white voters, who worry about the economic fallout from the pandemic, the likelihood of a second wave, and that they or a family member will contract the virus. A new SurveyMonkey Weekly Tracking Poll conducted July 6-12 showed 28 percent of non-whites approve of the President’s management of the pandemic response, with 68 percent disapproving. Only 17 percent of black respondents approved.

In 2020 President Trump may find black voters vote in higher numbers now that they know ‘what in the hell’ they ‘have to lose’. But Democrats must reckon with the disenchantment among black Americans with both political parties, and acknowledge that their bond is weakening.