How to lose friends and alienate people: Richard Holbrooke was a past master

Our Man: Richard Holbrooke and the End of the American Century by George Packer reviewed 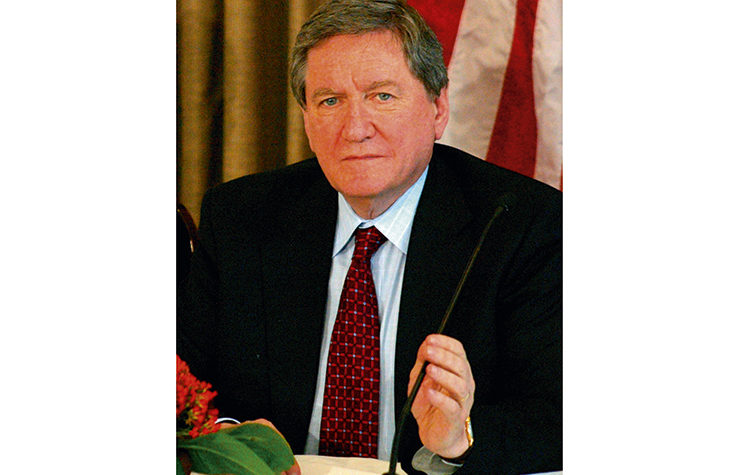 How to lose friends and alienate people: Richard Holbrooke was a past master

You may ask yourself, is it worth one of the best American non-fiction writers producing a book of just under 600 pages on an arrogant and abrasive egotist whose highest sustained rank in the State Department was that of a lowly assistant secretary? The answer is unabashedly yes. This is a remarkable work about a remarkable, if deeply flawed, statesman whose career was intimately intertwined with the 50 years of American decline from Vietnam to Afghanistan.

Nearly all biographies have long, boring stretches you want to skip. This one has none. The access to Richard Holbrooke’s papers and to the uncensored memories of his wives and mistresses, as well as George Packer’s own racy writing, makes this a fascinating and compulsive read. Even Packer’s constant personal intrusions into the story to express his opinion, New Journalism-style, work brilliantly. The author was told he should write a novel about Holbrooke rather than a biography and it often feels as though he has.

Dick Holbrooke first crossed my consciousness in 1994 when George Stephanopoulos, then a close aide to President Clinton, recounted to me with incredulity the behavior of the ambassador to Germany during a presidential trip to Berlin. Holbrooke had repeatedly leapt into ‘the Beast’ (the president’s armored limousine), breaking all the rules, and perched on the jump seat in order to get face time with the president. The White House staff were appalled.

It turns out this was not Holbrooke’s first offense. In 1977 Cyrus Vance, Jimmy Carter’s secretary of state, had to ask his personal secretary to write to Holbrooke saying: ‘You may not insert yourself as a passenger in the secretary of state’s car unless this office has specifically approved your request to accompany him.’ Holbrooke would lurk near the entrance to the State Department to ambush Vance, but the secretary of state was too polite to complain himself. The office warned Holbrooke that the security detail would keep him out by force if necessary. The whole of his life he was actually or metaphorically jumping into other people’s cars without asking them.

It is hard to believe that any adult human could ever have been so devoid of self-awareness as Holbrooke. He ignored his brother, his parents and his sons, went through several wives and mistresses and perfected the art of looking over people’s shoulders at cocktail parties in search of someone more important. He even pushed an elderly couple of Holocaust survivors off the VIP bus into Auschwitz on the 50th anniversary to make room for himself, leaving them weeping on the pavement. He misjudged successive presidents in the way he dealt with them, correcting Obama during his job interview and telling him to call him Richard rather than Dick because his wife would prefer that.

His life was a constant rivalry with his early and close friend, the earnest and honorable Tony Lake, who later became his nemesis. Lake and Holbrooke joined the State Department together in 1962 and were posted to Vietnam, where they played tennis most days. Holbrooke, however, chose to have an affair with Lake’s wife, which transformed him into an enemy.

At every step of the way, Lake was ahead of him, frustrating his ambition. Lake resigned on principle over Vietnam, as an aide to Kissinger. Holbrooke did not. Lake was secretary to Cyrus Vance on the seventh floor of the State Department while Holbrooke was on the less prestigious sixth floor, as an assistant secretary. Lake was national security adviser to Bill Clinton and initially vetoed Holbrooke’s appointment to the administration. Holbrooke opted to be Hillary Clinton’s adviser in the 2008 election while Lake was Obama’s foreign policy adviser. Obama won.

Lake was by no means Holbrooke’s only enemy. Nearly all the Democratic national security advisers had it in for him, from Brzezinski to Susan Rice. But his battles weren’t about status. Tony Lake later wrote: ‘What Holbrooke wants attention for is what he’s doing, not what he is.’

Holbrooke was driven by a burning ambition to be secretary of state from an early age. He adopted Dean Rusk, the father of a school friend and Kennedy’s secretary of state, as a surrogate father. He took Averell Harriman, the grand old man of American diplomacy, as his patron. But he never made it, perhaps because he tried so hard. The only time he was considered seriously was in 1996, but Clinton gave the job instead to Madeleine Albright. And as a Democrat he had to wait out the 20 years of Republican presidents, making money in New York. He ended up the ‘almost man’, largely because he had succeeded in alienating so many of his colleagues.

What makes this book so interesting, however, is not Holbrooke’s staggering personality defects and the constant pettiness of the bureaucratic battles but the span of his life. His career ran from his first posting to Vietnam under President Kennedy to his death as Afghanistan envoy under President Obama. He went to Saigon as an avowed believer in American power, working on counter-insurgency, living round the corner from the hotel where Graham Greene wrote The Quiet American. He never tired of quoting Greene: ‘How can we lose when we’re so sincere?’ Gradually he became disillusioned by the mistakes and the lies, working for a while on compiling the Pentagon Papers. Vietnam, and its lessons, stayed with him for life, so much so that Obama had to ask him to stop going on about it in White House discussions of Afghanistan 50 years later.

Holbrooke participated in most of the crucial US negotiations in those 50 years. He was at the first discussions with the North Vietnamese in Paris in 1968, arguing about the shape of the table. Later he tried to negotiate normalization of relations with Vietnam as assistant secretary under Carter. But his real moment came with the Bosnia mediations under Clinton. Tony Lake had wanted to negotiate himself but had the sense to let Holbrooke do it instead, giving him a nine-point plan to work with.

Warren Christopher, the secretary of state, who intensely disliked Holbrooke, thought his aggressiveness and self-dramatization were perfect for the Balkan warlords. Tudjman of Croatia called him ‘the Bulldozer’ and Milosevic called him something worse. He handled the talks brilliantly, alternately bullying and charming the dictators. All of the senior figures in the administration were haunted by Vietnam and more recently by Somalia. Only Holbrooke understood that bombing the Serbs was necessary to get them into discussions about peace, and he eventually overcame General Colin Powell’s objections.

Finally, he managed to corral all the parties in Dayton airforce base in Ohio in November 1995 and lock them up there until he got an agreement. He had no script going into the negotiations and extemporized throughout. He described his method as

and it worked. In fact, Packer reveals that Holbrooke had all but given up towards the end of Dayton and it was Milosevic, desperate for a deal, who saved him by making last-minute concessions and selling out his Bosnian Serb allies.

Holbrooke succeeded in stopping the war, but his success is not celebrated in Bosnia. There are no Holbrooke Squares, or 25-year-olds called Richard. And as time passes, the deal looks worse and worse. It created a two-headed monster of a government that cannot operate effectively, entrenched sectarianism and rewarded ethnic cleansing. In typical Holbrooke fashion, he wrote his own letter proposing himself for the Nobel Peace Prize and got others to sign it.

His final job was as Afghanistan envoy under Obama. He had always been an interventionist, supporting the Iraq War and urging Hillary Clinton to do so as well, convinced that Democrats who were considered weak on security were unelectable. But, unlike Kissinger, he wasn’t a practitioner of Realpolitik but rather carried the banner for FDR’s and Truman’s tradition of liberal internationalism.

In Afghanistan he tried to apply the lessons he had learned from the mistakes of Vietnam. He recalled all too well Lyndon Johnson’s tragic escalation in 1965 and tried to oppose the ‘surge’ in Afghanistan in 2010. The ‘Afghanization’ of the fighting echoed the failed ‘Vietnamization’ five decades earlier. He knew that trying to choose governments in Saigon had been a disaster, but found himself attempting to replace President Karzai in Kabul. He knew that there needed to be a political strategy to match the kinetic strategy in Afghanistan, just as had been required in Vietnam, where he agreed with Harriman on the need to talk to the North Vietnamese. But when he tried to open talks with the Taleban he was blocked by Hillary Clinton and Obama. Finally, he was felled by a heart attack in a meeting with Hillary in the State Department and taken to hospital, where he died under the surgeon’s knife.

His epitaph, and that of American foreign policy, is perhaps one he penned himself in 2001: ‘What is wrong with nation building? Somewhere along the road from Vietnam to Somalia, this once important part of US national security policy became a dirty word.’ Why is it that the US, which did such a brilliant job in nation building in postwar Germany and Japan, has not been able to manage it since, from Vietnam to Afghanistan?