Every era has its western. Ours happens to be a game of such attritional violence that it will stop those not totally inured in their tracks 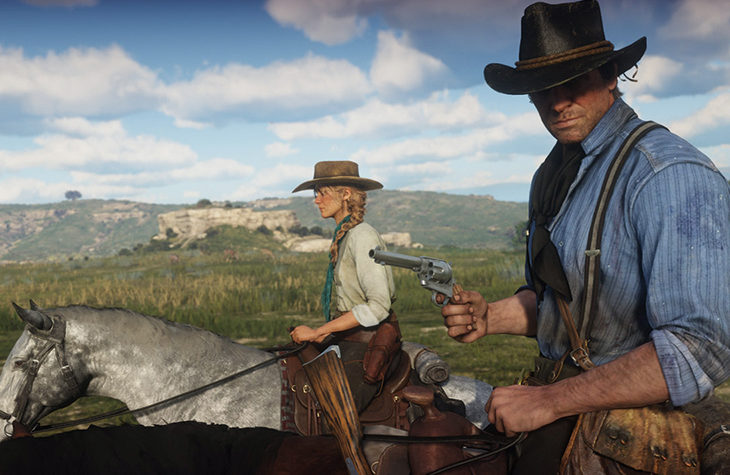 Every era has its western. For 30 years, from The Big Trail through to The Searchers, John Wayne reigned supreme across American cinema, a dispenser of justice forged on the battlefields of the Civil War. Then, from the 1960s, John Ford’s foundations were mixed with Italian influences to create the brutal anti-heroes of the spaghetti westerns. After that, the western began to feel old-fashioned, and started to be lampooned in films such as Blazing Saddles and Three Amigos for its reliance on archetype and cliché, before, at the close of the century, Cormac McCarthy reinvented it as something sparse, literary and realistic. And now, this era’s western takes that one step further.

Red Dead Redemption 2, the eagerly anticipated sequel to Rockstar Games’s groundbreaking 2010 open-world western video game, has been described as ‘unprecedented’, ‘landmark’ and ‘a masterpiece’. It has been greeted with the sort of reverent praise usually reserved for the loftiest of high culture, despite being marketed almost exclusively to teenage boys with £50 to burn. The game revels in the kitschiest of North American landscapes, the perfect metaphor for the poetic mundanity of death. In short, it is a good game that knows it’s a good game.

But it’s also a game of such attritional violence as to stop those not totally inured in their tracks. This is the western as envisaged by McCarthy, not Ford. Within the first stretch of gameplay you’ll dispatch a dozen combatants with pistol and rifle, loot corpses, lasso and hog-tie fleeing enemies and, in a particularly gruesome sequence, face the choice of whether to beat to death, strangle or free a man you’ve captured. (I opted to beat him to death.) At one point you are encouraged to fillet a deer in the last throes of death, and the guttural noises it made as it departed were sufficiently harrowing that my dog (my genuine, on-the-sofa lurcher, not the canine companion the game gives you in order further to divest you of any need for interactions outside the game) started barking at the screen. It is a gameworld in which cruelty is commonplace.

Right and wrong, good and evil; for all the gun-slinging, blood-soaked violence of the western, the moral poles have remained consistent. If the hero’s family has been murdered, his vengeance is justified. If the hero is defending an underclass from marauders, his acts of butchery are excusable. If the hero is fighting a man who has murdered a child in the opening scene, then he’s allowed to choke him with a harmonica. Those are the rules.

Our hero here — by no means the Man with No Name — is Arthur Morgan, a simmering avatar of masculine disaffection. When Clint Eastwood was honored with a lifetime achievement award by the American Film Institute, he remarked that his character in the Dollars Trilogy ‘had no name, so we could fill in our own’. Morgan is no such cipher. He is a gruntingly verbose outlaw with a personality so far from my own neuroticism that he remained a stranger, even when I repeatedly switched from the third-person perspective, which lingers behind Morgan, to the first-person, where all that’s present in your field of vision are his gnarled hands, the loop of a lasso, or the glint of a revolver. And yet when I’m hitting that O button and Morgan’s (my) fist is connecting with teeth, causing the controller to shudder with excitement, the distance evaporates.

What can the world of Red Dead Redemption offer that is new, other than the chance to act as the settler of scores, the dispenser of rough justice? It emerges back into the pop-cultural zeitgeist hot on the heels of HBO’s big-budget adaptation of Michael Crichton’s Westworld, where a billion-dollar theme park based on the Wild West gives tourists the chance to rape and murder their way through a horde of almost sentient robots. The show sets up an ethical question — is violence against almost sentient robots really violence — but the moral ambiguity is quickly undermined by revelations about the development of AI. It is also a romping, bloody yarn. The cake is had and eaten as we are invited to sympathize with the robots while at the same time reveling in the carnage and the sight of sexy, naked replicants.

The stray figures that populate the world of Red Dead Redemption do not trouble our sympathy in such ways. Though the landscapes of the game edge closer to photorealist facsimiles of the Northwestern United States — and though the game is considered to be one of the biggest writing tasks in literary history — passers-by still recur with the repetitious inscrutability that made ‘…but then I took an arrow to the knee’ one of the internet’s favorite memes. So the player is not much vexed by the prospect of violence against the men and women of the American frontier, almost universally labelled ‘Stranger’. There is no moral cake to be had here at all, as I blow a farrier’s head off just to test my new shotgun.

The first-person shooter has always had this question hanging over it, from Doom and Half-Life through to Halo and Call of Duty. Is it just a means of letting off steam? Or is there something unsettling about the ease with which we resort to inhuman violence? Rockstar Games, which developed Red Dead Redemption, was also responsible for the Grand Theft Auto franchise, in which players could murder prostitutes, waterboard enemies and pull out their nails if need be. There’s been no GTA game for the eighth generation of consoles since the fifth installment was published in 2013, and there are no sequels on the horizon, with the company focusing on Red Dead Redemption and a new spy franchise. While GTA was a critical and commercial triumph, it is hard to see how it could be published in 2018 without diluting the atopia that game theorist McKenzie Wark describes as ‘a safe haven in which to enact the problem of being… but without the oppressive stakes of one’s own life on the line’.

Better, then, to add the distance of history. Just as a dragon immolating prisoners of war in Game of Thrones doesn’t hark back to napalm bombs in Vietnam, so the relentless gun violence of Red Dead Redemption doesn’t carry the weight of the Pittsburgh shooting. Still, it is unsettling to play a game where the mechanics focus so much on bringing it closer to the tedium of real life — from cleaning saddles to cooking rabbits on a campfire — while permitting an unexamined streak of savagery. So, the real question posed by the modern western is: how close can we get to the act of violence before we get squeamish? And if we never flinch, what then?