Gales and Gaels — sailing solo from Cornwall to the Summer Isles

The Summer Isles: A Voyage of the Imagination by Philip Marsden reviewed 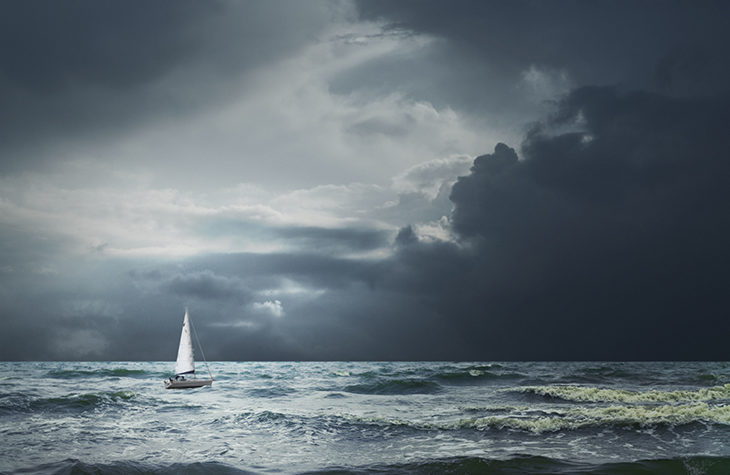 Gales and Gaels — sailing solo from Cornwall to the Summer Isles

This is the story of a solo voyage in a 31ft- wooden sailing boat called Tsambika.
Philip Marsden pilots his sloop along the west coast of Ireland, then the west coast of Scotland. The Summer Isles lie at his journey’s end, but in fact he is unable to land, owing to unfriendly headwinds — hence those islands ‘must remain in the imagination of the book’s subtitle’.

An award-winning writer whose previous books include Rising Ground: A Search for the Spirit of Place, Marsden was a competent sailor before the off (his grandfather taught him), but ‘had never skippered a boat to anywhere I couldn’t reach by lunchtime’. His achievement is all the more impressive as he claims to be ‘not naturally practical’.

The ballast of the book, keeping the poetic musings afloat, concerns cleats and winches, fenders and bowlines, the tyranny of the depth-sounder and the banshee scream of wind in the stays. When things go wrong, as they do in chapter four, the book reads like a thriller. Emotions clump around frightening moments. But nothing really bad occurs, despite the challenges of a vessel like Tsambika. Marsden cites the yacht club adage: ‘If you don’t like someone, leave them a boat in your will. If you really don’t like them, leave them a wooden boat.’ A third of the way through he breaks the journey and returns to hearth and home in Cornwall.

Throughout he zips ashore frequently in his Zodiac, attending a Blessing of the Boats and a midnight beacon-lighting. On terra firma he purchases supplies, calms cabin fever and above all engages with people, using direct speech to leaven the narrative. To tell his stories he cites books of myth, history and memoir, and tells of archaeological finds, such as a factory for making purple dye on the Inishkeas, Co. Mayo. ‘In the early Christian period, islanders used dog-whelks to produce the color: the mollusks secrete a purple mucus to sedate prey. Hillocks of shells lie next to the pits in which they were boiled. Bede wrote about it.’

The Summer Isles is a gazetteer of toponyms that conjure a scintillating watery world: Fenit island, the abandoned Blaskets, Inishbofin, Inishturk (population 58), Omey, on the edge of Connemara, an island only when the tide rolls in, Achill Head, which receives the highest winds and largest seas of any on Irish coasts, and Islay, Marsden’s first Scottish port. On Inis Meáin, the remotest of the Aran group, folk speak ‘the truest’ Irish, apparently, and elsewhere Gaelic revivalists have discovered what they took to be ‘the essence of pre-conquest Ireland’. The source notes at the end of the book are excellent.

Saints, predictably, flit in and out of the pages. The passages on Inishkeel, Donegal’s holiest site, are moving. The place owes its sanctity to Conall, who pitched up in ad 500 in penance for murdering his father. St Conall, as he was to become, settled and became known far and wide for his piety. His reputation drew other holy wanderers, and pilgrims still come after 1,500 years. Marsden speculates that Inishkeel, half a mile across, was a holy place even before Conall:

‘The very form of such islands suggests the shape of the human soul, at least how it looks in deep contemplation — somewhere discrete and earthbound but immersed in eternity, a tiny fixed presence in a restless universe.’

Marsden writes of the harshness of the northern coasts, and those passages temper the romance of remote beauty. There was the Cleggan Bay disaster of 1927, which took the spirit out of Galway fishermen after 25 perished in a sudden gale; and the tragedy that unfolded on Easter Sunday 1949 when three young men from the same family sailed by currach from Inishark to attend church and drowned in a storm on the way home. Eleven years later, the last six families left the island for good, evacuated to Inishbofin. A witness described it as being ‘like a garrison surrendering after a lifetime’s siege. The Atlantic beat them’.

The book is about places that exist and some that don’t, and about those curious ones in between. ‘Out here in the far west, along the fractured coastline of Britain and Ireland,’ says Marsden, ‘is Europe’s dreaming frontier, its open horizon, where the solid becomes fluid, the fixed wobbles a little and the cliffs and seas grow their own elaborate mythology.’ And he goes on to say, ‘Places are never just places: they are a story and myth and belief.’ He asks ‘how much truth is concealed in fantasy?’, and while he is too good a writer to draw pat conclusions, one senses the threads that connect legend and reality.

He is, as previous books have revealed, a lyrical writer who perceives the sea as ‘the conduit for our own restless hopes’. Many descriptive passages are excellent: ‘Darkness came that evening with a cold that sucked every shred of comfort from the earth.’ Elsewhere, waves loom ‘like shifting mountains’. He is not afraid of whimsy: on the north-west corner of Tory ‘the wind was in a hurry to get ashore’. And why not? It is on Tory that he walks in the footsteps of Derek Hill, an artist who painted the island extensively in the 1950s and 1960s. A handful of sun-faded prints still line the walls of his hut.

Marsden rented a room there and brilliantly evokes the isolation of those places, especially in years gone by. A schoolgirl once replied to a question asking her to describe Ireland: ‘A large island off the coast of Tory.’ It is the last Irish island to have its own king, and the author has a drink with the incumbent at the social club.

Fans of natural history will enjoy the book. At Clare’s gannetry, the most northerly in Ireland, Marsden writes of the allure of small islands for field scientists, being ‘crucibles of endemism, where species go off in their own direction’. Elsewhere, a cormorant’s guano ‘paled the lip’ of a ledge, puffins whirr and herring shoals were once so dense that you couldn’t row through them.

An element of memoir clings to the pages (Marsden has known the territory for decades), handled with a light touch; this is not a journey-as-redemption, or a saga wrapped round a personal calamity, such as Jonathan Raban’s solo sea voyage in Passage to Juneau (though that might be my favorite single-handed sailing book). Marsden makes the landscape his own, and his sense of wonder percolates the paragraphs. ‘Stepping ashore on these islands,’ he writes, ‘always brought its own thrill of anticipation, like meeting someone new, or reading the first pages of a book.’

There are longueurs, when nothing much happens and inconsequential details pad the prose. (He almost slips over but doesn’t, and later describes a child on a swing for no apparent reason.) But I greatly enjoyed this book, and it was clever to choose a title after a place the author didn’t reach because it emphasizes the subtitle. Many things exist most vividly in the mind.

Marsden says that years of traveling have taught him that ‘a journey’s trickiness is what makes it most rewarding’. There’s something in that.