The Boundless Sea: A Human History of the Oceans and The Outlaw Ocean: Crime and Survival in the Last Untamed Frontier reviewed 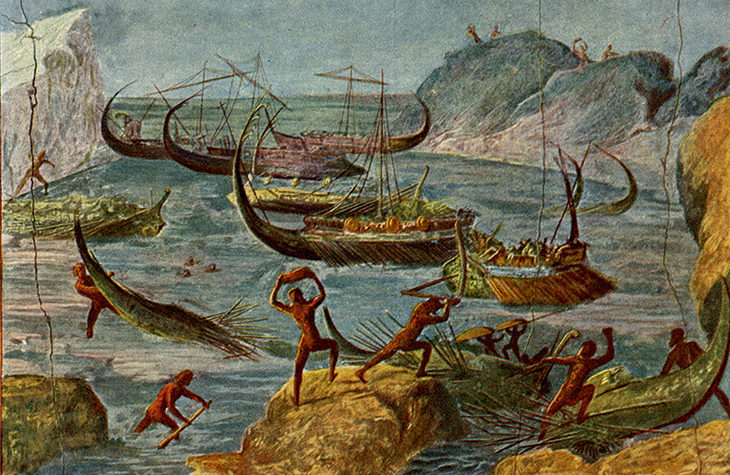 Traveling the Indus valley late in the third millennium BC you would have been awed by two Bronze Age megacities, 320 miles apart, ‘massive and tightly planned, very similar in layout’, their bricks and measures standardized, evidence of rigid authority. Their trade goods included Afghan lapis lazuli, Omani vases, legal seals from Sumeria, carnelian beads, packed for dispatch to Sumer — and that is almost all that is left of Harappa and Mohenjo-daro, and more than we know of them.

Their names are modern labels. This section of The Boundless Sea, David Abulafia’s fascinating ‘human history of the oceans’, is one of many moments of thrilling implication. (Do not assume anyone will know the name of London in 5,000 years’ time.) Pirates and sea battles, navigators, cartographers and many resonant characters illumine his elegant pages; but what emerges is an engrossing history of seaborne trade and discovery, the threading together of
the globe.

Humanity appears here less like a species than a single organism, making its way from land to land, fleeing war or environmental change, or prospering by trade and allegiance. The progress of mankind is marked in ceramic shards, such as those Omani vases; in inscriptions on stone, such as the ones left by Portuguese navigators in southern Africa; in records of discovery, such as the Periplous of the early Greek navigators; and in story, such as the one about the giant octopus which Polynesian seafarers were pursuing when they discovered New Zealand.

The Boundless Sea is a work of immense scholarship, a forensic tribute to human enterprise. Did you know that Greco-Roman navigators ventured as far as Malaya? That standards of living in Roman Carthage and Alexandria were ‘perhaps higher than at any time before the 18th century’? That south of Yemen, on the island of Socotra, there is a cave beloved of seafarers who, between the 1st century BC and the 6th century AD, left inscriptions in languages including Sanskrit, Greek, Indian, Persian, Ethiopic and South Arabian, allowing us to trace some of their networks? ‘A historian ignores the smaller, apparently insignificant places at his or her peril,’ Abulafia notes.

He corrects distortions through which modernity might mistake antiquity. ‘It is important to turn aside from a continent-based mental image of ancient Europe and to visualize long stretches of coast, punctuated by massive projecting promontories,’ he writes, before disposing of misapprehensions about the ‘Celts’ (a term used by classical writers, not a precise ethnic label) and tracing trade in ‘the Atlantic arc’, stretching from Portugal to Orkney.

Detail is one of the book’s delights. We know what time of year Mesolithic fishermen in Scotland caught pollock because the ear-bones of the fish ‘grow longer according to strict schedule’. Another delight is the majestic scope, which follows the rise and fall of the Phoenicians, Frisians, Vikings, Chinese, Hanseatics, Portuguese, Spanish, Dutch and British, as well as the stories of smaller endeavors and territories (the histories of islands everywhere, from Indonesia to the Arctic, are given their due) and those which have been sidelined. These include the formidable Danish East India Company and ‘the really important circumnavigation, conducted in stages’ by the Manila galleons which, from the late 16th century, linked China and Japan to Mexico and Peru. ‘Chinese silk and ceramics might reach a table in Spain by way of Mexico or the Cape of Good Hope.’

Rulers, sailors, traders and merchants are here in all their individuality, including the Chinese craftsman who carved a wooden nose for a diseased Spaniard in Manila, and returned with a whole cargo of noses, ‘only to discover what he should have noticed earlier: that the Spaniards had noses of their own’.

Though Abulafia resists drawing grand theories from his scholarship, certain themes emerge. From well before the expeditions of Zheng He, the immensely tall and capable 14th-century eunuch who commanded voyages on behalf of the Ming emperors across to Sri Lanka and east Africa, the history of human power is often the story of Chinese power. ‘Silver wanders throughout the world before flocking to China… its natural center,’ wrote a Portuguese merchant in 1621. The current Chinese appetite for bullion and the hope of a gold-backed Yuan suggest little has changed.

Amazon logging to feed western economies began 500 years ago. Middlemen, and middle islands with few goods of their own to offer, such as ancient Socotra and 21st-century Britain, thrive when positioned between greater powers (Brexit looks like the Ming abandonment of Zheng He’s voyages: no civilization prospers by hampering its trade links). The Danish East India Company supplied goods on behalf of English merchants to French settlers in Mauritius during the Napoleonic wars; in our time, ships of the Danish Maersk company transported the American war machine to Iraq, and royally overcharged for the service.

Few will find fault with this magnificent and judicious book. But having done my share of seafaring and sea rescue, I doubted the assertion that bodies washed up on the west coast of Ireland with ‘Asiatic’ features were native Americans (they would have had no features left after that sort of crossing), and I disagreed with this conclusion: ‘By the beginning of the 21st century, the ocean world of the last four millennia had ceased to exist.’ Receding ice, Abulafia points out, is opening polar routes, which will reduce the time it takes to ship goods from the Far East to Europe by 20 percent. But that seems less like the end of the historic ocean world than its extension.

After reading this book your horizons will be wonderfully expanded, and you’ll be as eager as the Ancient Mariner to retell its stories: of the early 19th-century Hawai’ian fleet of 20 European-style ships of King Kamehameha which traded across the Pacific; of how the exchange of the Moluccan spice island of Run for Manhattan seemed a good deal to the Dutch when they swapped it with the British; and of how the Portuguese, probably, and the Dutch definitely ‘discovered’ Australia before Captain Cook.

You finish Ian Urbina’s The Outlaw Ocean with the same sadness and disgust that Abulafia expresses when he writes about the slave trade. Urbina spent five years on a series of articles covering some of the worst aspects of life on today’s seas. A dauntless reporter, he penetrates the bilges of terrible Thai fishing boats with enslaved crews of Cambodian youths, and risks his life aboard Indonesian patrol craft in armed confrontation with the Vietnamese coastguard (illegal fishing is a major theme) and in Somalia.

Painstaking in the pursuit and establishment of fact, he indicts companies such as the Korean Sajo Oyang group, whose captains commit hideous abuses and whose directors deserve jail. He also criticizes practices, from over-fishing to indentured labour, nailing the ‘maritime merry-go-round’ by which the weak and poor at sea are exploited by the rich and strong ashore, who are shielded by shell companies and crew-manning agencies that absolve owners of responsibility for their employees.

The Outlaw Ocean is not a narrative but a series of chapters about reporting trips. Urbina hunts illegal fishing boats with the Sea Shepherd organization. He profiles a marine Repo Man who steals bankrupt ships on behalf of their creditors. He visits Sealand, a World War Two tower in the sea defending the Thames, now owned and occupied by eccentrics. Seafarers as slaves is the main story, but Urbina is also to be commended for revealing illegal waste-dumping by cruise ships and the conditions of maritime mercenaries on floating armories who wait months for work guarding container ships.

He certainly tells important tales — and  he made me want to give up eating fish, a fifth of which are illegally caught, shortly to be outweighed by the amount of plastic in the water — but I suspect he tells them better in his articles. The tone of his book is unvarying, and there are repetitions and descriptions of non sequitous expeditions. It is unclear what he was trying to establish in Somalia or what he achieved. At one point he subjects a traumatized Cambodian sea-slave to psychological interrogation, further pressuring a broken man.

If Urbina’s book admirably expands the field of what the 21st century needs to change — the exploitation of the seas and those who work them — Abulafia’s masterpiece has the potential to alter the way we understand the human story and our place within it. Guess which one Netflix has optioned.