Did the former Smiths frontman ever stop being a provocateur? 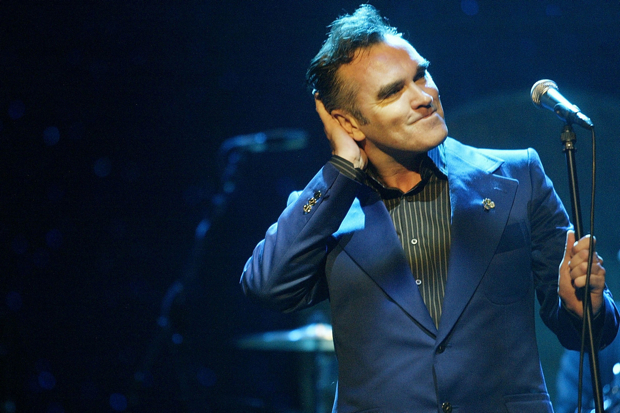 On Thursday, May 30, Morrissey was ‘canceled’. According to the Guardian, a British newspaper fond of such decrees, fans now feel ‘betrayed’ by the singer’s recent controversial and provocative statements, which have included support for Anne Marie Waters’s nationalist For Britain party.

‘Morissey [sic], what happened?’ the Guardian agonized on Twitter. But maybe they already know the answer. In just a decade, political correctness has obtained a stranglehold on Western culture. The provocateurs and counter-cultural icons of the late 20th century have been replaced by commercially compromised ‘influencers’, and artists who are carefully selected by social censors.

If William Burroughs, Timothy Leary, or Anton LaVey were still alive, the current public would be under orders to despise them too.

Burroughs was a staunch critic of the mainstream media. Leary was a supporter of libertarian presidential candidate Ron Paul, a man now smeared as a ‘racist’ and ‘white supremacist’. LaVey, the infamous founder of the Church of Satan, would have faced the hangman’s noose for the crime of associating with the ‘wrong people’, including noise musician, misanthropist, and serial provocateur Boyd Rice. Not to mention the fact that LaVey’s iconic Satanic Bible was heavily inspired by Ragnar Redbeard’s Might is Right — a Social Darwinist tract from 1890 which, like J.A. Hobson’s Imperialism, contains anti-Semitic material.

Unlike these other important counter-cultural figures, Morrissey is — thankfully — still alive. But that also means the working-class autodidact from Manchester must face the heat from a metropolitan nanny culture, despite the fact that he moved all the way to the States in part to avoid London’s notoriously venomous press.

The Guardian’s sentencing of Morrissey proves that the Western cultural atmosphere has become so restrictive and authoritarian, that even bog-standard patriotism is a no-go. The crimes of which the Guardian convicts Morrissey include him ‘wrapping himself up in the Union Jack’ on stage, and having ‘flirted with the far right and fascist imagery.’

Billy Bragg, the apologist for communism who worked with Morrissey’s band The Smiths in the 1980s, says that Morrissey has become ‘the Oswald Mosley of pop.’ Mosley founded the thuggish British Union of Fascists, befriended both Adolf Hitler and Benito Mussolini, and was a lifelong anti-Semite.

Ironically, Bragg was under fire from British Jews just last year after he claimed on Twitter that Jewish people ‘make things difficult by coming out with accusations that are out of proportion’ against the Labour party, which led to the Tablet headline: ‘Billy Bragg Blames the Jews.’

On Friday, Morrissey’s manager Peter Katsis responded to both the Guardian and Billy Bragg in a post on the singer’s official Facebook page. Katsis noted that Morrissey, always partial to a Wildean paradox, is the same old provocateur he’s always been.

‘Does the Guardian really care about objective journalism? Or care about journalism at all? Are they just desperate to get eyeballs on stories to save their dwindling advertising income?’ asked Katsis. ‘And by the way… did Morrissey stop being a provocateur? When was that exactly?’

Katsis delivered a scorching burn to Trotskyite troubadour Billy Bragg: ‘Does anyone care what Mr Jonze’s personal friend Billy Bragg, says (or creates) these days? Does anyone care if Bragg is “devastated” about anything? Did his last album or any of the singles chart in the UK sales chart?’

‘California Son entered the UK Sales Chart at # 4 today,’ Katsis proclaimed. ‘The British fans have shown their opinion. It can also be seen as a comment on what most people think about the Guardian’s.’

Anyone who considers Morrissey’s multi-decade career can see that he hasn’t changed. Whether it was his war against meat, his ambiguous sexuality, or wearing a For Britain pin badge on the Tonight Show with Jimmy Fallon, Morrissey has never stopped being a provocateur.

It was England, and the West in general, that changed. Today, nations once bastions of free speech and liberalism bear closer resemblance to Middle Eastern dictatorships, with the general public’s livelihood and social status depending on a carefully held tongue and the ‘right’ political opinions.

‘It’s very Third Reich, isn’t it?’ Morrissey observed after posters advertising his new album California Son were removed from Liverpool’s Merseyrail due to a single commuter’s complaint over the singer’s support for Anne Marie Waters.

‘In today’s culture wars, Morrissey has clearly chosen his side — and there have been consequences,’ proclaimed the Guardian, ominously adding Morrissey to the blacklist, and warning others against associating with him.

For our cultural establishment, Morrissey is a wanted man, but he’s still the same guy he was back in 1982. It’s his critics and censors who have changed, and who demand that we all dance to their tune.