Web of deceit: disinformation could prove the most powerful weapon of all

This Is Not Propaganda: Adventures in the War Against Reality and The Twittering Machine reviewed 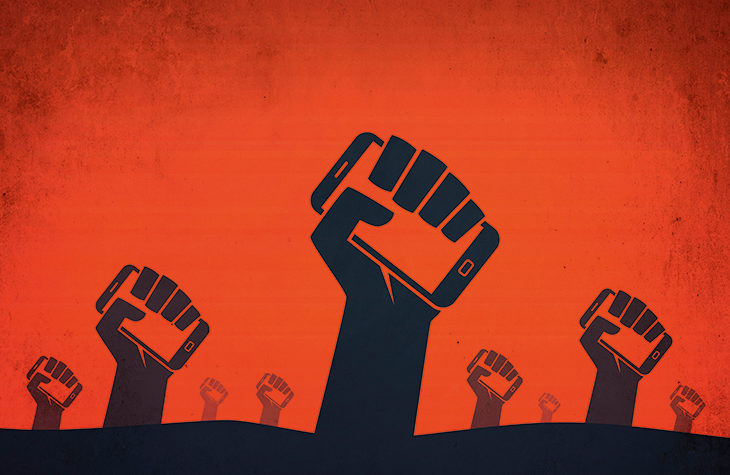 Web of deceit: disinformation could prove the most powerful weapon of all

We could begin almost anywhere. But let’s start in Ukraine, with Babar Aliev. Babar is a former gang leader who used social media disinformation campaigns to undermine a separatist movement. When his opponents won, he was picked up and put on a train out of town. His great disappointment, he tells Peter Pomerantsev in This is Not Propaganda, is that the separatists sent just three men for him. (Last time, he says proudly, there were three vans with Swat teams.) Today he is setting up ‘media literacy’ classes, helping people differentiate between true and untrue stories, reliable and unreliable sources.

Pomerantsev himself was born in Ukraine, and his own parents’ experiences of Soviet-era trouble with the KGB and their subsequent lives weave through this book; but mostly we are accompanying him in the present day, as he meets people who have been on the front line of the (dis)information wars. Many are committed activists, like Babar; or like Srdja Popovic, who produces step-by-step guides to ‘non-violent direct action campaigns’, and runs practical workshops on the peaceful overthrow of dictators. Or ‘P’, whose locally targeted social media disinformation activity helped get Rodrigo Duterte elected to the presidency of the Philippines. Or Alberto, a brilliant data-nerd, based in Mexico City, but who might simultaneously be operating in Barcelona. (Protest movements connect trans-globally behind the scenes most surprisingly.)

Other Pomerantsev characters are just ordinary people who need to make a buck, and so — for instance — take jobs in a troll farm, such as the notorious IRA (Internet Research Agency). In the run-up to the 2016 US elections and their aftermath, IRA content was shared by more than 30 million Americans. When the undercover journalist Lyudmila Savchuk infiltrated the farm, the co-workers she encountered were not hate-frothing maniacs but normal people getting on with their jobs, professional and pleasant. The report Lyudmila produced was shocking; but nobody, it seems, was especially shocked.

Freedom of speech, increasingly accepted of late as a general good, becomes problematic when coupled with deception, anonymity and the power of vast wealth to magnify some voices 1,000-fold over others. And for many spreaders of disinformation, getting a reader/viewer/voter actually to believe your untruths is not the only measure of success. Simply confusing them, encouraging them to doubt opposition truths, is just as good. Pomerantsev writes of ‘censorship through noise’. Truths and facts are inconvenient things anyway; much better to doubt everything equally.

If everything can be equally doubted, reality is yours for the shaping, to suit yourself. In May 2014, during Russian-Ukrainian clashes in Odessa, a fire broke out in the city’s Trade Unions House. There followed photos, vox-pops and casualty estimates, all distorting the truth of what happened. But when that truth was revealed, nobody seemed to care. The population remained split according to partisan positions — not between those groups with two competing opinions, but those gladly inhabiting two entirely divergent realities. Constructing a winning reality matters more than articulating a winning argument.

So we call this an ‘information war’ — but is it war, really? When Estonia suffered a crippling ‘denial of service’ attack, yes, it probably came from Russia, state-ordered or otherwise. But in these remote attacks by one country on another, the enemy is powerful but disembodied, nameless, unaccountable. The Nato treaty requires a response if a fellow member is attacked — but what constitutes an ‘attack’ when it’s invisible, and totally deniable? If this is ‘war’, can we ever have peace again?

Facts and truth may be taking a beating right now (not least with a US president, says Pomerantsev, with ‘no discernible notion’ of what they are), but they remain worth fighting for. (I know: how quaint!) So Pomerantsev travels to Rome to attend a global fact-checkers’ gathering. ‘In a world where facts have become sullied,’ he writes, ‘they wanted to make them sacred again.’

Khaled Khatib is one of Pomerantsev’s heroically insistent truth-tellers. During the shelling of Aleppo, he filmed the destruction; his footage went viral, appearing on news channels across the world. Khaled wanted things to be seen. If people knew, indisputably, what was happening, surely some kind of response was inevitable? (Russia is actively involved in this story, too, and very visibly so. Being seen to interfere suits the Russians domestically: the sign of a strong Kremlin.)

In the past, one might lazily have dismissed the disinformation shenanigans as things other people did, in other places, nothing for the Anglosphere to worry about. ‘I used to think the English were different,’ Pomerantsev writes, sadly. But in our digital world, territorial borders aren’t worth the maps they’re drawn on, and here we are. Turns out we’re not immune after all. Pomerantsev moved back to the UK from Russia in 2010 because he:

‘…wanted to live in a world where ‘words have meaning’, where every fact was not dismissed with triumphant cynicism as ‘just PR’ or ‘information war’.

Possibly not the UK’s strong suit today. Now Srdja finds he is ‘teaching his students not so much how to overturn authoritarian regimes as how to defend democracies’.

The new attacks aren’t driven by ideologies but by the strategies of figures such as Gleb Pavlovsky, whose idea was to unite disparate people behind a common ‘fairy tale’. (Stop me if this sounds familiar.) This was the one he used to get Boris Yeltsin elected, three decades ago. You identify people’s interests (social media is today’s chosen vehicle) and, knowing what they deeply care about, you micro-target them with specific stories. Tell animal lovers the EU is cruel to animals; tell environmentalists the EU encourages fracking — or whatever, really. (This fragmented micro-targeting, says Pomerantsev, is the opposite of centrism, which requires a big tent with sharp differences smoothed out.) It might involve dozens of different arguments for dozens of different groups, with an overarching slogan so vague as to be applicable to almost anything — ‘Take back control!’ The groups needn’t share an ideology (we’re past such things), nor any specific policy views, merely a common emotion. One group needn’t even be aware of the other’s existence. The only occasion they need to be brought together is that convergence, for the briefest moment, at the ballot box.

But… we also meet Sheffield’s Rashad Ali, a former member of the international Islamist movement Hizb ut-Tahrir, who, having extricated himself, now uses what he knows about recruitment techniques to help others do the same. Naturally, technology and its accompanying expertises can equally be handled for the good. So Richard Seymour’s clever, and alarming, The Twittering Machine begins with an emphatic reminder about the role of technology in our societies: it’s not inherently moral or immoral, but has the power to exploit and amplify already pervasive problems.

Seymour’s book is largely about writing (formerly a fundamentally ‘conservative’ thing) and its transformation as the technology changes. Today, he says, we have become ‘scripturient’, ‘possessed by a violent desire to write incessantly’. Social media platforms are interested in reaching consumer markets (and electorates), so we are invited to write to them, to share ourselves with them. We make ourselves known to them, so we become their targets, vulnerable to them. The data being collected by a company such as Google is mind-boggling.

Seymour examines the behaviors that get us into the system, the addiction patterns that keep us there (compulsion arising from the variability of rewards, say). We know the dangers of addiction, yet still we become addicted. He looks at his subject from many angles. He covers the ‘celebrities’ (in what he calls ‘the attention economy’) and their antitheses, the trolls. Trolling, too, isn’t new — again, the platforms have simply facilitated and amplified it. He looks at cyberbullying, and ever-more-fragmented identitarianism. His excellent chapter entitled ‘We are all liars’ is thoughtful and convincing about the spreading of fake news.

Social media platforms are agnostic —- or to use another Seymour word, ‘nihilistic’. They were meant to be liberal, open, democratic; and yet when finally he asks whether there is something about social media that is ‘particularly conducive to incipient fascism’, it is not as wild a suggestion as it might seem. Only occasionally does one fear that Seymour is overstating his argument. For most of the time, truly, and most regrettably, the greater fear is that he is not.

Seymour ends, as Pomerantsev does, with the biggest question: what now? He calls upon a first tentative vision of what a neo-Luddite response to our predicament might be. The book is dedicated teasingly ‘To the Luddites’.