The soft power of Italian jazz

Eat to the beat 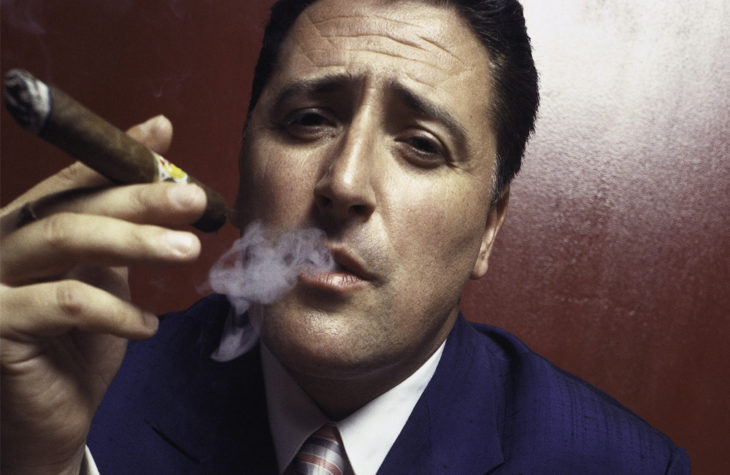 The soft power of Italian jazz

The singer and saxophonist Ray Gelato opens his set at Birdland with a cover of ‘That’s Amore’. But this isn’t the sleepy send-up of Neapolitan street waltzes that Dean Martin recorded in 1953. Gelato raises the tempo and swings it four to the bar. As he sprints his way through the verses, Philadelphia’s City Rhythm Orchestra drives the pace, piano, bass and drums holding down the shuffle while the four-piece horn section plays call-and-response to each other and his vocals. It’s the start of a fun, high- energy set, the two hours of which feel as if they pass in half the time. You don’t tap your feet to this music: you stomp.

Gelato is a beefy, cigar-smoking Londoner with an American father and an Italianate stage name that leans perilously toward parody. A major player in the jazz revival of the 1980s and 1990s (think the movie Swingers), he tours all over the world and is a star in Italy. His sound derives from ‘jump blues’, the up-tempo boogie-woogie that took off in the late 1940s. Dancers loved its blend of a driving backbeat with the croaking but tuneful sound of ‘tough tenors’ such as Earl Bostic. Like Western Swing, it was a more sophisticated precursor to the rock’n’roll revolution.

Gelato’s take on jump blues is indebted to Louis Prima (1910-78). Prima, an Italian-American from the French Quarter of New Orleans, was renowned for a rip-roaring act that mixed swinging tunes with merciless servings of comedy and showmanship. He’s best remembered for his signature medley ‘Just a Gigolo/ I Ain’t Got Nobody’, memorably revived in 1985 by David Lee Roth, and as the voice of the scatting orangutan King Louie, the ‘king of the swingers’ in Disney’s animated Jungle Book (1967).

‘I Wanna Be Like You’ is possibly the greatest Disney song of all time, but Prima’s musical importance and influence reach beyond the jungles of India. Prima started out as a swing trumpeter and bandleader in the line of the first Louis from New Orleans, Louis Armstrong. In the 1930s, his shows at the Famous Door on 52nd Street — then New York’s ‘Swing Street’ — helped popularize that club among both musicians and the ‘Park Avenue set’ of semi-liberated debutantes and Wasp rakes.

Anti-Italian sentiment surged during World War Two, but Prima leaned in like Sheryl Sandberg over a bowl of ziti: ‘I eat antipasta twice just because she is so nice, Angelina/ Angelina, the waitress at the pizzeria’. Prima followed the success of ‘Angelina’ with ‘Buona Sera’, ‘Please No Squeeza Da Banana’ and ‘Felicia No Capicia’: musical charmers whose self-deprecating lyrics disarmed the popular association of Italians with mobsters and Mussolini.

Like Count Basie, Prima formed a small group when the big bands declined. In 1954, Louis Prima and the Witnesses — with Sam Butera on sax and Prima’s new wife, Keely Smith, sharing the vocals — accepted a residency in Las Vegas at the relatively unknown Sahara Hotel. As Las Vegas rose, so did Prima, Smith and Butera. The lovely, sweet-voiced and placid Smith was the perfect partner to Prima’s buffoonery, and his Armstrong-like trumpet the perfect musical foil to Butera’s raging tenor.

Meanwhile, jazz was a palpable hit back in the mother country. The Nazis had despised jazz and its predominantly black and Jewish performers as ‘degenerate’, but Mussolini had hailed it as ‘the voice of Italian youth’. Il Duce, whose aesthetic sense was sharper than his strategic sense, had even compared jazz’s modernistic qualities to those of the Futurists — possibly taking patriotic pride in an Italian-American jazz lineage that began with Nick LaRocca, the band leader and cornetist of the Original Dixieland Jazz Band.

After Mussolini’s patronage and the Marshall Plan, jazz exploded in postwar Italy. While Prima was in Los Angeles recording songs about Italians, Italians like Renato Carosone were writing and singing songs like ‘Tu Vuò Fà L’Americano’ (You Want To Be American), about an Italian who plays baseball and drinks whiskey-sodas like a real americano. Just like Il Duce’s son, the pianist Romano Mussolini, who also happened to be Sophia Loren’s brother-in-law and the father of the nationalist Alessandra Mussolini. In the 1950s, the Romano Mussolini All Stars were one of Italy’s top jazz groups. Listen to his alarmingly titled 1990s album Perfect Alibi and decide whether Romano led with his left hand or his right.

In 1999, Jude Law and Matt Damon performed Carosone’s ‘Americano’ when they played two jazz-crazed American expats in the movie adaptation of Patricia Highsmith’s The Talented Mr Ripley. That sweat-soaked scene thrilled audiences, and rightly so: Italian jazz remains a distinctively enjoyable and enduring style. Like red sauce, another Italian import to America, it’s smooth and sweet, but slightly tart; like chicken parm, it’s a solid American take on the classics. ‘Out there, it’s 2019,’ Ray Gelato tells the house at Birdland before counting off the next number, ‘but in here it’s 1953.’