Once Upon a Time…in Hollywood reviewed 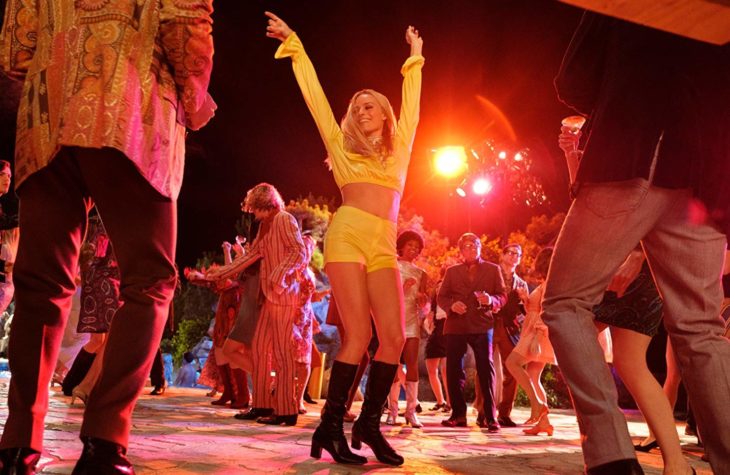 Once Upon a Time…in Hollywood

is Quentin Tarantino’s most pleasurable film since the first installment of Kill Bill. It’s delightful pop esoterica, blending the sensational disposability of a pulp novel with an antique edition of Playboy filled with crackling cigarette ads you can practically inhale off the page. The film is a visual banquet with a daft machismo that puts Tarantino out of step with the marketing plans of today’s priggish e-cigarette smoking snoots.

Ultimately, Once Upon a Time… is a stylish fairytale where the two anti-heroes are a neurotic leather-clad TV cowboy named Rick Dalton (Leonardo Di Caprio in his funniest performance) and Cliff Booth, a sadistic and square-jawed drunk who feeds his dog canned slop, played by Brad Pitt. Dalton is neighbors with film star Sharon Tate (Margot Robbie), and we are zapped into their dreamy commercial for Hollywood, 1969.

The quenching sound effects have a near-narcotic effect: beer cans popping-open with steam and foam; the sizzling electricity of marquees lighting-up across Sunset Boulevard; the fuel-injected pop of a powder-blue Karmann Ghia, and the rattling of ice cubes inside a boozy German stein. The noises are deeply satisfying, feeling as though Tarantino is sharing his vintage toys with us. We’re invited to play along with him and fetishize the instruments on the dash of Roman Polanski’s modish British sports car. We even watch The FBI with Tarantino on a wood-cabinet TV. Tarantino then shares a comic-strip illustrating every American boy’s wet dream: to challenge Bruce Lee to a fight. This is his most inviting film.

Pedagogy and message-driven dialogue has no place in the blithe fantasy of Tarantino. Once Upon a Time… is an exaggerated slapstick mockery of floral Hollywood that’s his funniest, hippest, smokiest, drunkest, and most literary film: the director spent five years writing it as a novel. The film explores the sunny pleasures of pre-Manson Los Angeles as a wildly free west, a time when the cars weren’t too afraid to merge onto the 405, flirt with feral hitchhikers, and speed through the city’s meandering canyons without the anxiety of flattening a celebrity’s genetically-superior poodle. It’s a fearlessly nicotine-laced picture of LA as Tarantino’s boyish fantasy, where Tate’s blowout blonde-hair rhythmically bounces like a bouquet of wild flowers inside her Porsche. In Polanski’s passenger seat, she runs her fingers through her mane as if we’re watching a sensual Farrah Fawcett shampoo ad. She is the obsession of the film, as a windblown blur of colors we tail like paparazzi from the backseat of automobiles, inside dark movie theaters and through the window of her bedroom, where she dances as carefree as a Doublemint chewing gum ad. Her clothes, dance moves, and breathtaking smile are all deliciously observed, along with her ale-colored legs melting into the white cotton sheets of her milky bed. We even hear her snore! This is Tarantino at his most voyeuristic.

As with recent offerings Inglourious Basterds and Django Unchained, the film’s success hinges on subverting what we already know. It builds towards a visceral climax in preposterously Tarantinian fashion. If you don’t scream laughing or find yourself mesmerized by the appetizing violence, the joke’s entirely on you — you’re the punchline in a nearly three-hour feast that seems only to suffer when Tarantino overshares his connoisseurship. Once Upon a Time… is not only Tarantino’s funniest film, it’s also his most gourmet.