Resistance: A Songwriter’s Story of Hope, Courage and Change by Tori Amos reviewed 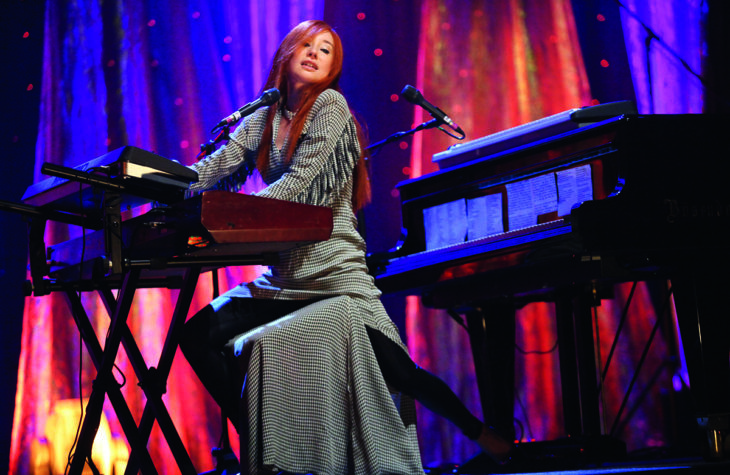 In her new book, the singer-songwriter Tori Amos advises aspiring artists to be wary of those who would lead them astray. ‘Most people cannot raise their hand and say, “Your expression, your piece, your song, your art, is not to my taste; in fact I have an aversion to it, but I think it’s brilliant.” And that means that… some people judge something to be good or not good by what they personally like. Beware of this, I say to all artists.’

The simple sentiment encapsulates why so much creative potential is stifled before it can flourish. An artist whose principal goal is to please an imagined audience, or to adapt his or her work to critical trends, is no kind of artist at all. Insightful criticism is invaluable, but bad criticism can be destructive if it is taken seriously. In Resistance, Amos recalls how a journalist once asked her if she ever read her press. ‘No,’ she replied. ‘I weigh it.’

The book’s title implies forms of resistance that are both political and artistic. Amos believes that we are living in a time of ‘unprecedented crises’, but the book doesn’t wallow in platitudes. Instead, Resistance recounts key moments in Amos’s life non-chronologically, and the text is interspersed with lyrics from the songs that these events inspired. This highly effective conceit allows us to see how, for Amos, music is a cathartic and necessary outlet. The lyrics of ‘I Can’t See New York’, for instance, draw us back into the chaotic aftermath of the terrorist attack on the World Trade Center. When reading Resistance, the effect is not so much that of a musician commenting on her songs, but rather of a curious sensation where the songs exist as ethereal choric entities, responding to her life.

For all Roland Barthes’s insistence on the ‘death of the author’, there is little doubt that Amos’s lyrics are enriched when contextualized within her biography. ‘The Vicar’s Wife’, for example, might at first be mistaken for mere whimsy, but it takes on a fresh resonance once we learn about its connection to Amos’s late mother, to whom the book is dedicated. Mary Ellen Amos, we are told, had given up her education and career to devote her life to supporting her family. Without her, contends Amos, ‘I would not have been a songwriter.’ In a sense, then, her mother is a latent presence throughout her creative work, which is perhaps why ‘The Vicar’s Wife’ is not included on the track listing for Unrepentant Geraldines (the album on which it appears), but is instead appended to the title song as a kind of spectral coda.

Amos’s reflections on the creative process, and the importance of remaining true to one’s own vision, form the core of Resistance. She explains how her first album, Y Kant Tori Read, was a flagrant attempt to pander to the fashions of the time. There are flashes of brilliance in the songwriting, but Amos’s talent is constrained by a ‘rock-chick’ sensibility that sits uneasily with her natural style. The ambitious young woman who had told a writer for the Washington Post that she wanted ‘to be a legend’ had made the mistake of prioritizing fame and commercial success over artistic integrity. She was resisting her muse to appease a false god.

It didn’t work. Y Kant Tori Read flopped, and it looked as though she would have little choice but to return to playing other people’s songs on the piano bar circuit. When her record label decided to give her another chance, she produced what was to become her breakthrough album, Little Earthquakes. The songs were piano-based, confessional in tone and lyrically ingenious. She had started to speak with her own voice. Her label had other ideas, and said that she should ‘replace all the pianos with guitars’.

Most young artists would have grudgingly acquiesced for fear of being dropped. Others might have refused to compromise and severed all ties with the label. Amos owes her career to the fact that she found a third way, submitting new songs which remained faithful to her artistry but which showed that she was willing to accept feedback. Little Earthquakes was a critical and commercial triumph and paved the way for the 14 albums she has since produced. The lesson is clear: a certain willingness to play the game might be necessary, but artists should not waste their talents trying to anticipate the zeitgeist.

To define ‘art’ is a near impossible goal, although Émile Zola’s description of art as ‘life seen through a temperament’ strikes me as a worthy attempt. Amos’s achievement has depended on her ability to channel unique perspectives and personal struggles into her music. Resistance offers fascinating insight into her creative process and is an essentially optimistic book. It is a passionate defense of the primacy of the artist in society, and calls for creative reactions to bad experiences. As one of her lyrics has it, in the face of destructive forces ‘we must out-create…to rehumanize’.