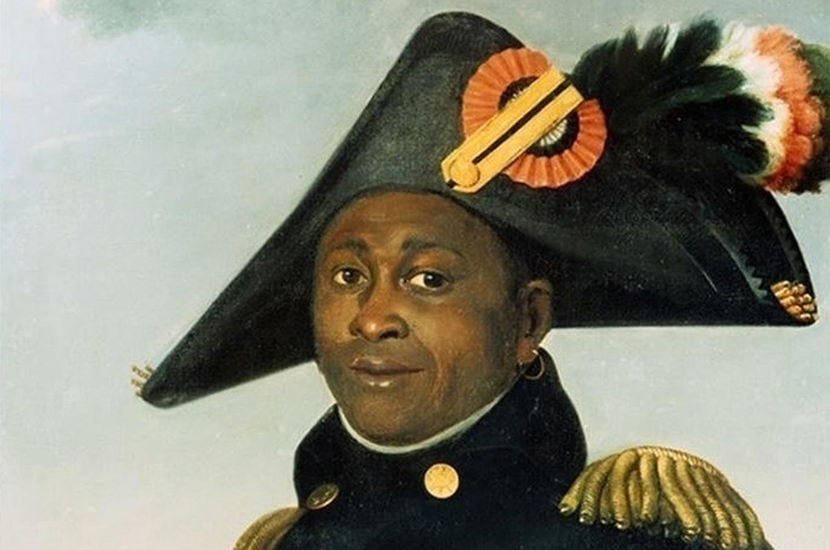 In Haiti you have to be careful which founding father you admire. The average Haitian will think first of Toussaint Louverture when talking about their island’s revolt against France in the late 18th century, and about the original idea of a full-fledged Black republic: Toussaint the stable, the intense, the military genius, courageous, careful. But for others, the real hero of the revolution is Jean-Jacques Dessalines, or Papa Dessalines, who is said to have connived with the French to remove Toussaint from power.

Once France had exiled Toussaint, Dessalines turned on the French, rejecting their ‘peace’ and authority. He prosecuted the revolution to its bloody end, but without the restraint that Toussaint had often demanded from his fighters. Koupe tet, boule kay was Dessalines’s slogan: cut off their heads and burn down their houses. It was Dessalines who finally routed Napoleon, forcing the French to abandon their richest West Indian colony and, by extension, Louisiana. Yet the story of Toussaint Louverture is the one that has captured the world’s imagination, because from the top of the Black military structure he put his thoughts, plans and demands down on paper, unlike Dessalines.

Every Toussaint biographer has to look for ways into a narrative that won’t feel painfully familiar, and come to a reckoning with their subject’s legacy. For Black Spartacus, Sudhir Hazareesingh did much of his research in the French archives, where so many revolutionary documents are preserved — including Toussaint’s letters to various French officials, commissioners and republican organizations. His way into the story is through Toussaint’s military adventures and, more importantly, through his catlike politics.

It’s a narrative of dismissals and rejections, as our hero sweeps the way clear for his own trajectory, dispatching French officials right and left and sending them home with high-handed stabs in the back, thus ensuring that none could ever become more powerful than he. These stories provide an object lesson in how to get rid of unwanted intruders — a chore that has been so difficult and complicated throughout Haiti’s history. Only connivers and schemers, the duplicitous and the manipulative, can push out enemies more powerful than they are. Toussaint did that.

As Hazareesingh points out, Toussaint, who early on was fighting for Spain in Saint-Domingue (Haiti’s colonial name), had a habit of luring Black or mixed-race officers away from the French on the sly. During one battle he recruited André Vernet, a mixed-race defender on the French military staff. The town under siege soon fell to Toussaint, and Vernet joined Toussaint’s secretariat and later married his niece.

Lustrous pearls (such as the niece), scattered throughout Black Spartacus, turn this detailed, blow-by-blow account of Toussaint’s military exploits into a dazzling, complicated narrative. They add romance and family intrigue to a plot that is also dotted with Toussaint’s own writing, which will be appreciated by those who have never heard his worldly, arrogant and eloquent voice. If Haiti is what you think about, Toussaint Louverture inevitably bestrides your mind like a colossus. If it’s not, you may never even have heard of this giant of liberation. This is what for some centuries it has meant to be a historical figure while Black. Yet the global protests today on behalf of Black lives reverberate with the story of Toussaint. His is a cautionary tale for our times.

From the start this great figure’s significance has been debated from both sides of the political spectrum. Some — incredibly — portray him as a defender of the established order, and essentially a French conservative at heart; others admire him as a wily undercover operator who had participated in hidden preparations for 1791’s outburst of rebellion against slavery. Hazareesingh, who opts for the wily operator theory, is interested in moving away from ideology and ‘getting back to Toussaint’ — a man who changed the world, but who was still just a man.

Indeed, all this weight and ponderous historical baggage was carried by a slight, wiry figure with bulging eyes and an underbite. As a child, Toussaint was sickly, and skinny; he was clever. He was a brilliant horseman, and fast on his feet, and in time became the coachman and groom of the Bréda plantation in the north of Saint-Domingue where he’d grown up. One early heroic image of Toussaint — known on the plantation in his childhood as fatras bâton, translated as ‘skinny stick’ — is of the young man standing ‘fully upright’ on the back of a horse as he guides it across a swollen river.

Eventually Toussaint purchased his freedom and bought a plantation and other lands for himself, owning and renting slaves and buying some their freedom: a master like others — only not. In any case, not long after the fiery, destructive summer of 1791, Skinny Stick, the coachman of Bréda, emerged as Toussaint Louverture, former slave, now freedom fighter.

For the next decade he never rested, leading and sustaining history’s only successful revolution by an enslaved population. He manipulated and overcame the three great powers involved in the exploitation of his homeland, and he and the men and women who fought for him typified all the freedom fighters the world has seen since. Standing before his troops, his head wrapped in a red kerchief, he would ‘seize a rifle, brandish it in the air and shout “This is our freedom!”’ Don’t forget, this image is from 1790s Saint-Domingue, not 1970s Angola.

Hazareesingh helps us understand Toussaint by illustrating his ‘Creole’ qualities — meaning his syncretic abilities that stretched from culture to culture, race to race and language to language (he spoke French, Creole and Ewe-Fon, the language of his father’s Allada tribe, and knew a little Latin). Though he asserted his brotherhood with the African- and Haitian-born enslaved people who were in open war with the plantation owners, he opposed their plans to rid Saint-Domingue of its white population. He supported and opposed violence, sometimes on the same day. He understood the novelty of his position in history as a barrier-breaker and gate-opener, but he was still interested in economic and diplomatic relations with the imperial powers. He began as a republican, with loyalty to revolutionary France, and ended as a rising authoritarian in a future Caribbean republic.

Toussaint was, above all, slippery, undefinable, ungraspable as air, not necessarily one thing or another. Some of his followers thought of him as a spirit: he seemed to appear and disappear at will. When it suited him, he readily spoke to enemies as if they were his dearest friends. And they believed him. Duplicity was a tactic. He was supremely dangerous, while appearing to the colonists to be the most rational and malleable of the rebels. While still supporting France, he promulgated an autocratic constitution for Saint-Domingue without French input — an insurrectionary act, France felt, for which he was not forgiven.

In response to the threat of independence for this most lucrative French possession, Napoleon sent 20,000 troops to the island. On one of those ships were Toussaint’s sons, who had been studying in Paris, and even lunching from time to time with the Empress Josephine (another pearl of information), whose family owned Haitian plantations that Toussaint had preserved for them. The boys came bearing a letter from Napoleon — the only one Toussaint ever received from him, despite having written to him several times seeking signs of recognition.

At the family home, the boys gave Toussaint the note from the most important man in the world. After reading a few lines of Napoleon’s condescending praise, he tossed it aside. Hazareesingh writes: ‘He saw through Bonaparte’s ruse…and told his children…that if the First Consul truly wanted peace, he would not have sent warships.’ It was clear to Toussaint that Napoleon wanted war and a reinstatement of slavery, and Hazareesingh quotes copiously from Napoleon’s grotesque, racist and violent plans for returning the island to French authority, with all its iniquitous trappings.

Although Toussaint saw through that ruse, in the end he was caught by another: a false assertion of friendship, not unlike a feint of his own. For such a brilliant manipulator of men, he had a strongly held belief in humanity’s humanity — especially wrong-headed when applied to the French — and set off, with uncharacteristically little security, to a meeting where Napoleon’s men arrested him and bundled him on to a ship, aptly named Héros. He was headed for France, imprisonment and a long, slow death.

There are almost no stories that can compete with Toussaint’s, as Hazareesingh’s exciting narrative proves. We are shown exactly how Toussaint kept the revolution going, traversing the mountains of Haiti on his white steed, Bel-Argent, sleeping four hours a night, sometimes on a wooden plank, eating vegetables almost exclusively, taking no spirits, meeting with officials, staff and troops, writing letters and proclamations, directing battles, always urging his men and women on and never giving up.

He thought 10 steps ahead of his rivals and antagonists; he knew in what ways his foreign handlers underestimated him, and he manipulated them and deceived them by using their prejudices and cultural miscalculations against their own interests. Bel-Argent bucks and plunges through ravines and tangled forests while his rider brings his troops of shouting, singing, drumming men and women through thunderstorms and tropical downpours to dead-of-night skirmishes. Sometimes, descending into battle, his forces burst into unplanned singing of the Marseillaise.

Hazareesingh wants to cut through the retrospective ideological analyses of previous biographies to ‘find our way back to Toussaint…to see the world through his eyes’. He achieves this through strong narrative writing, and a sense of the logistical intensity and personal direction that were needed to conduct a full-blown guerrilla war without electricity, transport or radio communications. He also shows us Toussaint as if he were, somehow, being covered by People magazine: sending out dozens of letters a day, wearing down his five poor secretaries as he shoots off follow-up letters to ensure delivery while writing billets-doux to his mistresses (almost all of which were destroyed, along with other items, when the French invaded Saint-Domingue). He makes decisions about his children’s education; he requests new, clean clothing. He loves horses and roses; he loves music, and he supervises music students.

Best of all, he affectionately calls the revolutionary Haitians’ idea of a free, Black-run nation ‘their crazy dream, arising from their absolute love of liberty’. In attributing this crazy dream to his compatriots he also claims it for himself. Hazareesingh gives us a breathtaking picture of the decade of Toussaint’s dream — a dream unlike any other, and one that must never be forgotten, because it still awaits its finale.