If Brett Kavanaugh’s nomination collapses, so might the GOP 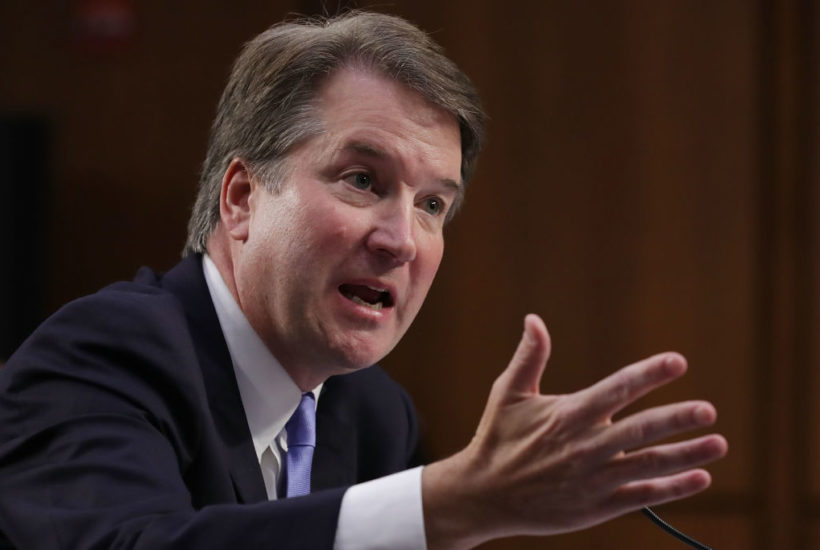 Brett Kavanaugh’s Supreme Court nomination has suddenly turned into a political disaster that threatens to submerge the GOP’s hopes of long-term judicial realignment. The Washington Post this weekend published details about a previously anonymous allegation of sexual assault committed by Kavanaugh in his youth. The political implications are clear, even if everything else about the claim is hotly disputed: Kavanaugh’s nomination is punctured below the water line.

A woman who knew Kavanaugh in his high school days, Christine Blasey Ford, has accused him of drunkenly assaulting her at a party, holding her down, tearing at her clothes, covering her mouth when she attempted to scream — in short, attempted rape. Ford says there was a witness: Kavanaugh’s Georgetown Prep classmate Mark Judge, who today is a conservative journalist. Judge denies that Kavanaugh would do such a thing and says he has no memory of such a thing. But Judge has written extensively about his heavy drinking during his time at Georgetown Prep and afterward and the blackouts he experienced. His memory is a slender reed upon which to hang a Supreme Court nomination.

​Kavanaugh absolutely denies the charge. The White House has said there is no question of withdrawing his nomination. But Republicans control the Senate by only a single vote, and it’s not difficult to imagine Susan Collins or Lisa Murkowski, two GOP senators who already under great pressure from abortion-rights supporters to vote against Kavanaugh, finding this allegation reason enough to cave in.

​What can save Kavanaugh at this point? His best hope may lie with two other teenagers who were allegedly at the party that took place around 1982. Their names have not been revealed, but Ford provided them to the Washington Post, which contacted them this weekend and received no response. If they support Ford’s story, Kavanaugh is finished. If they don’t, his nomination may yet get through. Ford told a therapist about the incident, but Kavanaugh is not named in the therapist’s notes. Ford’s husband says she told him about Kavanaugh by name, and Ford contacted the Washington Post and her congresswoman, Rep. Anna Eshoo, with her claims when Kavanaugh was on the short list of probable Supreme Court nominees but had not yet been nominated. If this was a partisan shot at discrediting Kavanaugh, as some Republicans suspect, it was set up far in advance.

The stakes involved in replacing Justice Kennedy were known from the start, to be sure, and just as certainly there are opposition files on every prospective replacement. If Kavanaugh falls, the path to confirmation is not necessarily any clearer for other nominees. There has been a barely concealed glee on the part of some supporters of Amy Coney Barrett, another judge short-listed as a replacement for Kennedy before Trump chose Kavanaugh, over Kavanaugh’s troubles. Barrett is preferred by some social conservatives because she’s seen as an absolutely certain pro-life justice, and as the mother of seven children, she’s considered invulnerable to left-wing charges of insensitivity toward women. Indeed, the hope is that she would embarrass the left by turning the tables of identity politics on them, getting abortion-supporting Democrats to attack a woman.

That theory may be naive. Murkowski and Collins would probably not support a nominee seen as being reliably anti-Roe; with Kavanaugh, they have had just enough plausible deniability. If abortion rights were all that mattered to these senators from Alaska and Maine, they would not be Republicans in the first place, but the fact that they can see their way clear to remaining in the anti-abortion party does not mean they will support judges (or candidates for elective office) who excite abortion’s staunchest opponents. The very thing that social conservatives like about Barrett imperils her chances of confirmation.

But there is a harsher irony. Some of Barrett’s biggest supporters among the Christian conservative intelligentsia are also unstinting critics of President Trump who have called into question Christian voters’ support for him. Republicans are already facing a daunting midterm election this November, with the House of Representatives likelier than not to fall into the Democrats’ hands and even the Senate at some risk. A Kavanaugh collapse would probably not help the GOP’s chances: Democrats and the left-wing foes of every aspect of Republican judicial philosophy, above all its anti-abortion dimension, would be encouraged by the GOP’s humiliation and have a stronger reason than ever to go to the polls to flip control of the Senate. Social conservatives might also seem to have a greater impetus to fight for the Senate so as to ensure a conservative is appointed in Kennedy’s place, but losing Kavanaugh would still have a demoralising effect on many Republicans (if not the same ones) and GOP-leaning independents. Beyond the politics of abortion, it would heighten the impression that the GOP is incompetent and sleazy. Many a conservative media moralist — a Michael Gerson, for example — has in fact promoted just that view of today’s GOP. These NeverTrump moralists, if their words have any effect, might actually help to torpedo their own dearest objective of getting an anti-Roe Supreme Court.

​Republicans have hoped all along that the particular Senate races in play this year will favour them, allowing them to increase their margin of control in the upper chamber no matter what happens to the House of Representatives. This is a bad bet: a wave that sweeps the House away will batter the Senate as well, changing the odds in races that otherwise would easily be won — like Ted Cruz’s contest in Texas. If Kavanaugh withdraws, President Trump’s next appointee will have an even tougher time, and to get through a Democratic Senate may have to be so weak on abortion that he or she winds up being closer to the mold of the departing Justice Kennedy — or even the late Sandra Day O’Connor — than to that of either Kavanaugh or Barrett. That would be a terrible result for social conservatives.