The doctor is in, and the pundits are on the couch 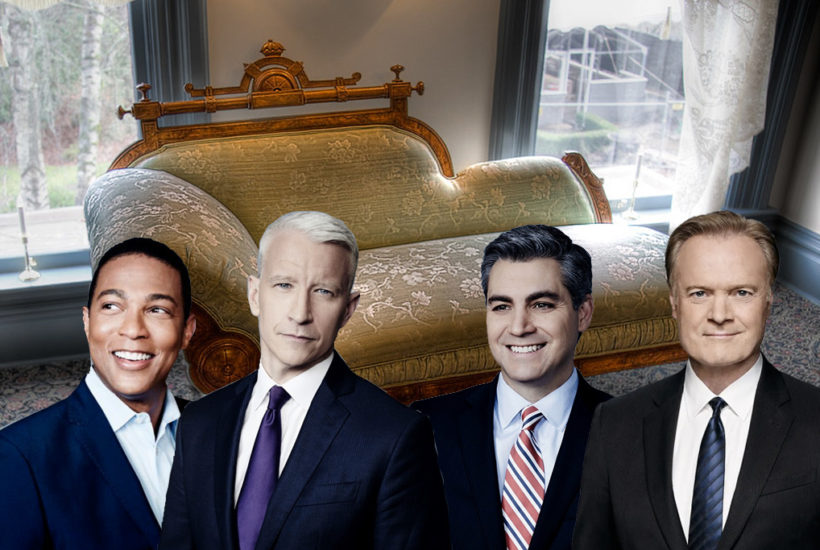 The ‘Goldwater rule’ is the informal name of the American Psychiatric Association’s guideline that it is unethical for psychiatrists to give ‘a professional opinion about public figures whom they have not examined in person, and from whom they have not obtained consent to discuss their mental health in public statements.’ It’s named after 1964 Republican presidential candidate Barry Goldwater, who sued a magazine and won after it published a story claiming over a thousand mental health experts said he was unfit for office.

‘Fuck that,’ reflected psychologist and Yale professor Bandy X. Lee when she looked at the Goldwater rule in 2017. Who has time for ethics when you’ve been summoned from the Ivory Tower to take up arms against Literally Thanos?

That year, Bandy X. Lee recruited dozens of her colleagues for The Trump Contagion, a book diagnosing President Trump with all sorts of fantastical mental health issues, including impulsivity, dementia, and narcissistic personality disorder. Only the last one may be true, but we knew that going in.

Interviewed by top psychiatric journal Salon, the unblinking shrink with the thousand-yard stare and the name reminiscent of an Eighties’ synth band said the president’s imaginary mental health issues were a ‘state of emergency’ and that ‘our survival as a species may be at stake.’

Because Bandy is so clearly sane and grounded, it was time to put her on cable news. MSNBC’s Lawrence O’Donnell, who has displayed schizophrenic symptoms in a leaked video, said he’d been searching for years for a demented, unethical psychologist who’d toss standards and reputation aside to remotely diagnosis the president as being mad. The teleprompter reader who hears voices isn’t great at doing basic research and sending emails. But Bandy X. Lee managed to find 27 of them in short order.

Since then, the rebels of the mental health industry have confirmed their lack of principles by forming Duty to Warn, an organization which is going to save us all by spreading the word about President Trump’s mental health crisis. The Democrats and the media have loved it. Confused jitterbug Nancy Pelosi, the Slurrer of the House, has repeatedly suggested President Trump may be ‘unfit for office’. This is a dog-whistle in communist circles for invoking the 25th Amendment, on removing an incapacitated sitting president.

The Intercept, USA Today, and gossip rag The Harvard Political Review have all rehashed Bandy X. Lee’s book this year. And journalists — who, never forget, are our moral superiors — don’t even need a fancy medical license to definitively say President Trump is ill. It’s all there in his speech transcripts. You see, the president don’t talk pretty. If you work at The Intercept, that’s all the evidence needed to start fitting the straight jacket.

‘Have you ever tried reading what Trump says? Go look at a transcript from one of his rallies,’ columnist Mehdi Hasan said recently, his fluting enunciation a model to us all, on a podcast about Trump’s mental health. ‘It’s astonishing. It’s mind-boggling. I cannot overstate how bizarre and beyond parody the transcripts of Trump speeches and interviews are.’

Unsurprisingly, the left learned all this from the Soviet Union. Communists invented the modern playbook of weaponizing psychiatry for political ends. Opponents of communist leaders were said to have ‘psychopathological mechanisms’ of dissent. The term ‘philosophical intoxication’ was applied to mental health diagnoses of those who went against the Party, and was written into anti-Soviet agitation and propaganda laws. If you don’t toe the line, you are clearly unwell. Sound familiar?

In the spirit of fairness, we found Ron, a licensed marriage and family therapist in California who has been practicing for nearly 30 years in his garage. Ron’s also married to a licensed psychologist. We showed him clips of some of the brightest stars at CNN and MSNBC to ask what unspeakable horrors might be lurking behind the eyes of the professionally Trump-deranged millionaires of cable news.

But first, we asked Ron: is Trump Derangement Syndrome a real thing?

‘Trump derangement syndrome, or TDS, is a more intense manifestation of Reagan or W. Bush derangement syndrome,’ he said. ‘It is real, but is not as common as often portrayed. A howling mob appears to activate latent cases. TDS is likely the byproduct of a personality disorder such as bipolar personality disorder and is a projection of the inner experience of those manifesting it.’

‘American society rewards extroverted personality types, and we like things big. Unfortunately we appear to confuse big with extreme,’ he added, slurping on a Big Gulp. Onto the clips.

The patient clearly suffers from narcissistic personality disorder and delusions of grandeur. When selected to ask a question, Mr Acosta ignores all other journalists in the room, but then fails to show much interest in the offered response to his inquiry, as if his libido is depressed. He rudely talks over others who are speaking, regardless of whether the person is from the administration or another journalist.

We might surmise that Mr Acosta was raised in a deprived economic environment and had to fight for the necessities of life such as adequate food, shelter, attention and affection. Mr Acosta secures a supply for his enormous attention needs mostly through negative attention, but finds positive attention in his life to be extremely rare and all too fleeting.

Patient C. appears to have an anal-retentive phase disorder, as evidenced by his inability to simply let loose when he finds a story or situation to be funny, and his reading of the Ridiculist segment when he should be its subject. His on-screen persona quite possibly overlays an anal-aggressive character trait that only his very closest associates have witnessed. Rule out avian inhalation syndrome in which a bird once inhaled survives in the larynx and is only detected when an inhibited individual attempts to laugh out loud (LOL) or in it’s magnified form (LMAO).

Mr Cooper is recommended to watch Red Skelton, Rich Little, Harvey Korman and Tim Conway recorded performances while inhaling poppers, to learn the art of how to laugh at one’s own jokes while not also turning off the audience.

Patient L. is a textbook case of a man with an inferiority complex attempting to hide it by assuming an air of superiority. Unable to see Kanye West sitting in the Oval Office discussing the concerns of black America with the POTUS as an American success, Mr Lemon responds with outbursts of glossolalia and obscenity, and calls the sight ‘a minstrel show’. When the president ‘uses’ or ‘exploits’ Kanye West that is so sickening Mr Lemon must avert his gaze. But, when Mr Lemon uses and arguably exploits the scenes of Kanye speaking directly with the president in the Oval Office this is newsworthy and important to discuss on CNN’s Situation Room with Wolf Blitzer.

Mr Lemon fits the definition of impostor syndrome when feigning concern for Kanye, while claiming to diagnose him with a severe psychological disorder that deserves the immediate intervention of his closest family, friends and allies. Mr Lemon very likely himself suffers from impostor phenomenon, a condition where a highly successful individual believes himself to be a fraud, regardless of how many awards or hours on the air he receives.

Impostor phenomenon has its roots in intense family or origin conflicts and lack of parental support. In this case it’s likely accompanied by canine dysphoria, a condition where his comfort dog refuses all contact with him and he must resort to cuddling a comfort snake to reduce his inner angst.

Patient O’D, an MSNBC anchor, is clearly psychotic and experiences auditory hallucinations. That his profession requires him to wear an earpiece only masks the torture he experiences as he battles to explain to others that he is hearing voices or hammering sounds that they cannot hear. Mr O’Donnell has the rare experience of hearing inner female voices, a likely indication of gender identity dysphoria or gender identity confusion.

He further demonstrates visual hallucinations as he swats at unseen annoyances. Evidence of intermittent explosive disorder is also evident in his verbal tirades, destruction of papers within his reach, and indiscriminate throwing of available objects. His visually aggressive expressions are more evidence of his inner rage. He also projects his neurotic response to trauma onto his work environment by calling it ‘insane’ and ‘out of control’, and attempting to alleviate his sense of impotence by using the strongest expletives he can conjure.

And that’s all we have time for this week.