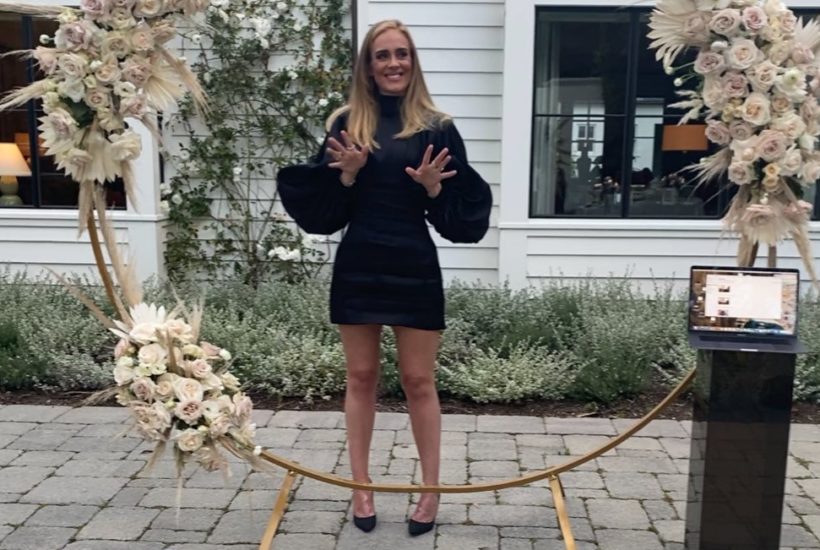 Well, hello! Adele is a singer who identifies herself with numbers. Her first three albums are titled 19, 21, and 25. But after the British pop star caused a raucous on lady-Twitter Wednesday when she posted a photo on her 32nd birthday revealing dramatic weight loss, the only number that matters now is: what do we think she is out of 10?

Thank you for the birthday love. I hope you’re all staying safe and sane during this crazy time. I’d like to thank all of our first responders and essential workers who are keeping us safe while risking their lives! You are truly our angels ♥️ 2020 okay bye thanks x

Obviously we would never rate a treasure of Adele’s talents merely on her appearance. That said we must acknowledge the many factors to be taken into account when evaluating the sexual market value of the formerly portly crooner, who is almost completely unrecognizable after her transformation. Does being a millionaire add points? Is it fair to subtract up to four points for because she is single mom? What about her spectacular breasts? And do we factor in the manner in which she lost the weight — is someone more attractive, that is to say trustworthy, if they unload 100 pounds of lard by diet, exercise, or by writing a check to the gastroenterologist for a stapling?

‘Her face was prettier fat’, a friend shrugged.

‘No beers,’ another friend said, referring to how much alcohol he’d have to ingest before bedding her. ‘Continue fat shaming others’.

Men, eh? I conducted a small poll of heterosexual males and found that, while of course nobody would judge her purely for her looks, the consensus is that she’s gone from about a 4 to a 6. One Spectator staffer, who must remain nameless, has clearly been quarantined for too long. He fearlessly declared Adele is now an 8, which she obviously isn’t.

Early twenties Adele was a sweaty porker with a powerful voice, but the artist soon trimmed up a bit. During her granny-outfit phase she gave us the most familiar Adele, the cuddly mom. Now, suddenly, she looks like an anorexic wannabe Instagram influencer. The shocking transformation may not be only due to the weight loss. Some speculate her face has been surgically altered with dermal fillers in the cheeks and jaw and that she’s had eye surgery and Botox.

‘Adele has always been attractive you’re just all fatphobic’ one fat-knighting beardy chap whose Twitter cover photo calls for murdering Tories wrote. The comment got nearly a million ‘likes’.

adele has always been attractive you’re just all fatphobic

‘please stop saying Adele had a “glow up” we have no idea what her health was/is like and this is just reinforcing the “skinny ideal” or the concept that the skinnier you get the prettier you get’ wrote another user, receiving nearly 20,000 likes.

I see that Adele is trending because people are saying how gorgeous she is since she lost weight. Y’all, we’ve been over this…

Adele has in fact probably given herself more years of life — and possibly inoculated herself from the Wuhan coronavirus, which appears to target the obese. But she was never one of body positivity’s prized land monsters — perhaps because, at a mere 250lbs, or whatever, she was always too thin. She was also far too modest. This stands in contrast to the foul gargantua that is Godlizzo, whose cottage cheese dumper is relentlessly thrusted in the face of Americans. Lizzo’s impending hip replacement and first heart attack are political, but Adele was always just kind of a chubster. Singers might be the only profession outside of chefs where people tend to overly trust a fatty. There’s just something that makes sense about a walking bucket of fried chicken that can wail. Maybe it’s because we can physically see the manifestation of all their pain and sadness. You can’t miss it!

Dramatic physical transformations in celebrities are often jarring, like when Renée Zellweger sliced off someone else’s face and stapled it on top of her own. Al Roker and Al Sharpton might be among the only two people in history who actually looked better when they were beefopouloses. Adele seems like she’ll be able to pull it off and at the same time serve as an actual role model for young girls.