Does one small ‘s’ make a world of difference? 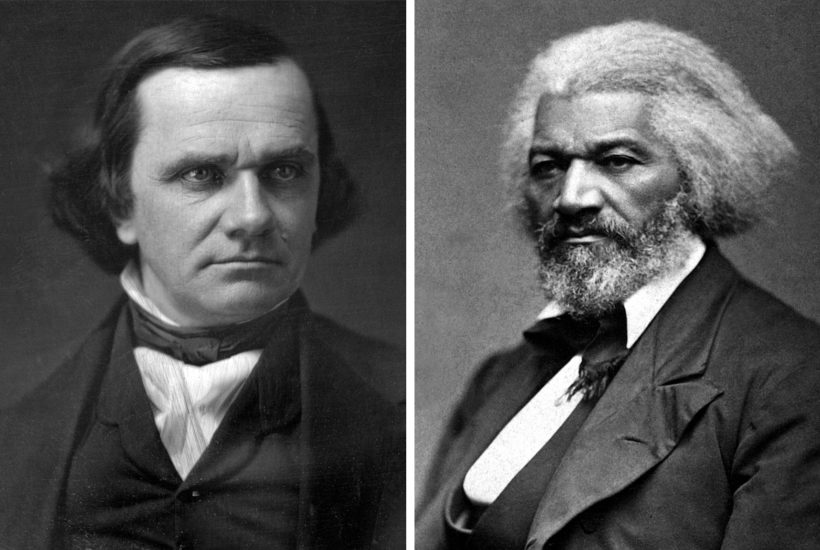 Stephen A. Douglas and Frederick Douglass

In Chicago, student activists have won a great victory for social justice, in the form of a single letter.

Today, Stephen Douglas is best-known as the foil to Abraham Lincoln in both the 1860 presidential election and in a series of famous debates during an 1858 Senate showdown.

But Douglas was more than a foe in the first half of Abraham Lincoln’s Wikipedia page. He spent the 1850s as one of America’s best-known and most influential senators. He was an advocate of popular democracy who struggled mightily to hold together the United States prior to the Civil War. When secession came, Douglas rallied behind his erstwhile foe Lincoln, and strongly supported the call to arms to suppress the Southern rebellion.

For all of this, Douglas was once honored, if not as a great man, than as a distinguished one who did his best. He was given no great monument, but in Illinois his accomplishments were seen as worthy of having a park named in his honor.

Until now. While the country has been convulsed with attacks on Christopher Columbus, George Washington and Theodore Roosevelt, in the Chicago neighborhood of North Lawndale, a grade-school activist group took aim at the nearby Stephen Douglas Park. Douglas, some historians contend, was indifferent towards slavery as he always voted with the majority. He also owned a plantation in Mississippi, a bequeathment from his late father-in-law. The students’ demand was the addition of a single letter to the park’s name: a lower-case ‘s,’ to be precise.

On Wednesday, in an emergency meeting of the Chicago Park District Board, commissioners voted unanimously to finally give the students their ‘s’. Stephen Douglas Park will become Frederick Douglass Park.

This sort of renaming-but-not-really gambit pops up occasionally. In Washington, the city of Seattle once sat within the borders of King County, named for Franklin Pierce’s obscure vice president, William King. In time, activists began to feel uncomfortable, so in 2005 King County was rechristened as…King County, named in honor of Martin Luther King, Jr. And during the last great American iconoclastic fury, in 2017, San Antonio’s Robert E. Lee High School became the Legacy of Educational Excellence High School (or LEE High School, for short!).

Cockburn appreciates these Solomon-like efforts to please all parties with a mild dose of wit, but at the same time, he can’t help but wonder at the purpose of all this. Over the past century, North Lawndale’s population has collapsed from 112,000 at its peak to a mere 35,000 today. Is a park named for the answer to a Jeopardy! question actually hurting anybody? Will renaming it help anyone? Cockburn suspects residents suffer far more from Chicago’s ubiquitous gang violence. By the end of July, the city will have suffered a once-unthinkable figure of 100 murders in a single month. North Lawndale itself has seen 17 murders this year, which puts them on pace for a murder rate double that of El Salvador, the world’s deadliest country. Chicago’s population is still declining, its government is still in a financial mess, and dozens of its public schools remain atrocious, no matter whom they are named after.

The new park name doesn’t even seem to have satisfied the kids requesting it. After the renaming was announced, organizers reacted not with joy, but with new complaints: because the city’s decision to rename the park was made abruptly, there was no opportunity to grandstand in public over the issue. According to one local source, the slight ‘added insult to injury’, though Cockburn is struggling to see where any actual injury was ever inflicted.

A park has been renamed, but Chicago is still a mess and its citizens are still unhappy. If America is in a revolution right now, who is winning?