When you address a committee, you are competing for attention and influence on the internet 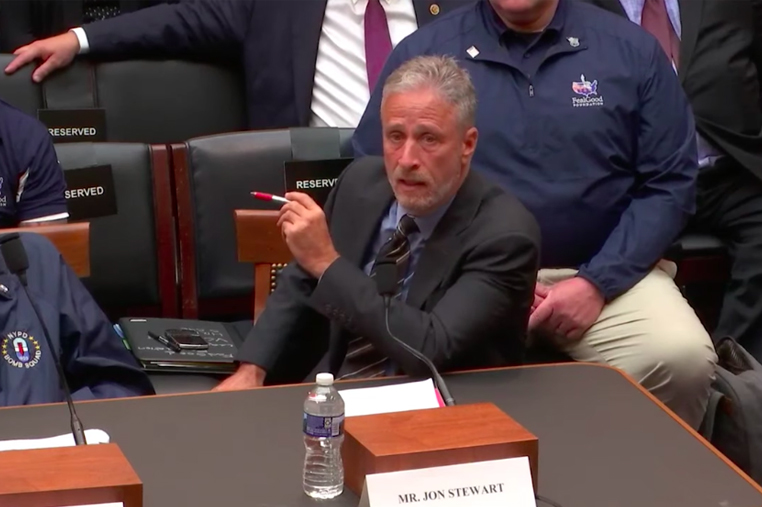 Watching parts of the Watergate hearings again recently, I was struck by just how dry they are as a spectacle. This momentous national occasion, with all its historic consequences, appeared to be conducted with all the torpor of a group of chameleons sunbathing on a tree branch.

If you were to compare Alexander P. Butterfield’s restrained, emotionally strangled testimony with Jon Stewart’s showboating appearance before a House Judiciary Committee yesterday, you would think an enormous change in human nature had occurred in the decades between then and now.

Stewart was attending a hearing for a bill that would protect the health benefits of 9/11 first responders. Noting that around half of the subcommittee’s 14 members were absent, Stewart launched a pitch-perfect nine-minute-long assault on the errant lawmakers, which was going viral before it even finished.

To note that he was showboating is not meant as a criticism. Stewart has campaigned for proper health coverage for the first responders for over a decade and knows many of them personally: these were not the vainglorious platitudes of another celebrity chump.

But it is also worth noting that Stewart did not have to – as a YouTuber might put it – ‘DESTROY’ the committee as much as he did. He could have made his points without the ‘EPIC’ anger; without all the zingers (‘al-Qaeda didn’t shout “death to Tribeca”‘); without constantly fiddling with his pen the way he used to on The Daily Show. He could – probably – have got what he wanted without making the whole process of committee hearings look dull, antiquated and inhumane.

When Stewart was finished Louisiana Rep. Mike Johnson was quick to say that members of Congress meant no disrespect. He said he believed that the bill would pass and that the reason why some of the committee seats were empty was due to lawmakers moving in and out of the hearing, which was normal procedure. In these times the actual processes of government (often involving an empty chair here and there) are almost always translated online, by the left and the right, as one more nefarious example of let them eat cake.

In February a four-minute clip of Alexandria Ocasio-Cortez firing off a few questions at a panel of ethics experts was viewed nearly 40 million times online. Today it is the most watched political video ever uploaded to Twitter. Throughout it AOC speaks very simply and clearly, as if addressing a particularly dumb four-year-old. Her aim, in around 240 seconds, is to show that the American system of government is ‘fundamentally broken’. Whether such a statement can be proved in such a short space of time probably matters less than the fact that James Corden loved the clip.

Then in April Candace Owens popped up in front of the House Judiciary committee. Like Stewart, she blasted lawmakers, essentially telling them that even having a hearing on white nationalism was a waste of time. Again the implication was clear: the hearing itself was illegitimate.

Reason editor Robby Soave’s testimony on the same topic in May had the same why do we even need to bother with this drift.

What Stewart, Ocasio-Cortez, Owens and Soave actually said, whether it was right or wrong, matters far less than the way they said it. In the last 10 years, the rules of the game have changed. Politicians, activists and writers are no longer giving testimony to a committee, as Butterfield did in 1973. They are competing for attention and influence on the internet. As William Davies wrote recently in the LRB:

‘This calls for a very different set of political and personal talents: confrontation, wit, defiance, spontaneity and rule-breaking.’

This has much more in common with performance art than politics. In the old Situationist movement there was a technique known as a détournement – which simply means hijacking, or rerouting. In practice this meant turning the familiar upside down – logos against advertisers, slogans against politicians – in order to demonstrate just how arid the familiar really was. Is this not what the most canny operators are doing to our old, boring, complicated institutions?

From the dawn of YouTube to the present day, incongruity has been built into viral content. A woman puts a cat into a trashcan. A child interrupts a policy wonk. A rich girl thinks she can sing. A grown man becomes hysterical about press coverage of Britney Spears. Donald Trump becoming president of the United States continues this fine tradition: the last four years have been the most sustained viral content hit of all time. The digital logic of Trumpism – incongruity and détournement – is filtering down into every level of government that is worth tweeting about.