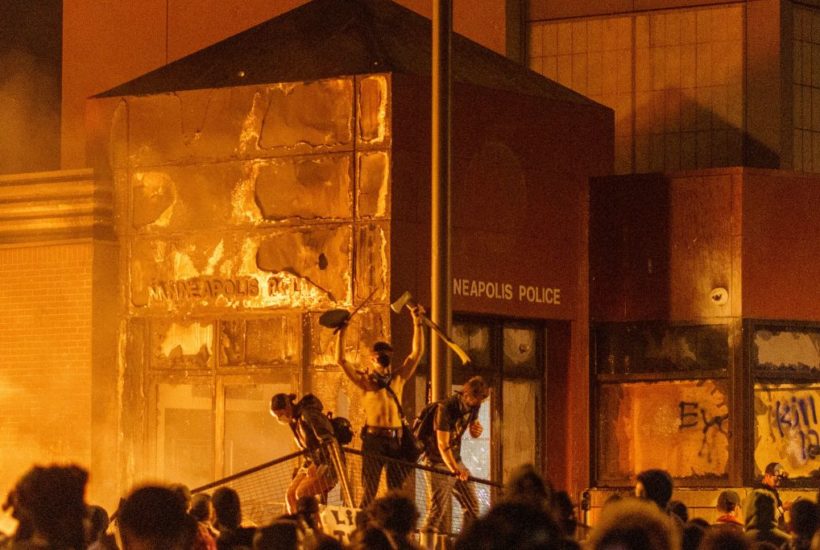 One of your irritating cousins on Facebook may have already shared the news about ‘Umbrella Man’. The man appeared in a May 27 viral video out of Minneapolis, smashing windows and spraying graffiti at an AutoZone, before quickly departing. Shortly after, the AutoZone was plundered and set ablaze by the mob. Soon, hundreds of businesses across Minneapolis were smashed, looted or destroyed. Rioters exposed the impotence of Minneapolis police by seizing a precinct building and setting it on fire. Within days, riots and looting had scarred not just major cities like Chicago and Los Angeles, but once-sleepy locales like Fort Wayne, Green Bay or Olympia. In the following weeks, ‘mostly peaceful’ demonstrators went to war against statues, carved out a short-lived autonomous republic in Seattle, and began a lengthy standoff with federal forces in Portland.

Cockburn would have thought that the carnage of the past month would render one man’s window smashing a historical footnote. But instead, the opposite has happened, for the usual 2020 reason: it is politically useful.

Yesterday, local Minneapolis sources reported that police have received an anonymous tip identifying Umbrella Man. According to police, he is a member of an obscure prison gang: the Aryan Cowboy Brotherhood. He’s also the exact sort of person who might benefit from an ‘abolish the police’ movement. Not only does he have convictions for assault and domestic violence, he also possesses a large enough build to easily dominate whatever social workers might be sent to ‘de-escalate’ his crimes in a post-police future.

The police identifying a suspect behind several broken windows two months ago might seem a peripheral story, given the events of the past year. But the national press thinks the opposite. The New York Times, the Washington Post, CNN, BuzzFeed, the Daily Beast and probably your uncle’s blog, all raced to put up pieces on the story.

Their motivation was clear. The same publications that refused to even use the r-word months ago now see a chance to revise history. National riots that cost billions of dollars are not the responsibility of far-left extremists and criminal opportunists, enabled by passive politicians and enfeebled police. Instead, it can be blamed on right-wing provocateurs, all thanks to the deeds of one petty criminal with a sledgehammer. A criminal who, by the way, was not even the first person to sow destruction in the Twin Cities. It took Cockburn just a single minute on Google to discover rioting and destruction from May 26 — the day before Umbrella Man supposedly kicked everything off.

'Umbrella Man,’ who broke windows at George Floyd protest in Minneapolis is a white supremacist who allegedly sought to “incite violence. It was peaceful before he arrived and then he broke a window and it devolved into looting and chaos. https://t.co/G3H87J2Z5A

‘It devolved’. To Cockburn, that raises more than one relevant question: What was the ‘it’, and what made it ‘devolve’? Doesn’t easily-accessible camera footage show hundreds of people participating in looting, riots, and arson? Haven’t dozens of people, in cities all over the US, been arrested for these crimes?

Cockburn is admittedly old-fashioned, but shouldn’t people be held responsible for their own behavior, rather than being treated as helpless automatons who shift from peaceful to ‘mostly peaceful’, all thanks to a single man with a hammer and an umbrella?

In years past, that question would be a rhetorical one. Today, it is political.