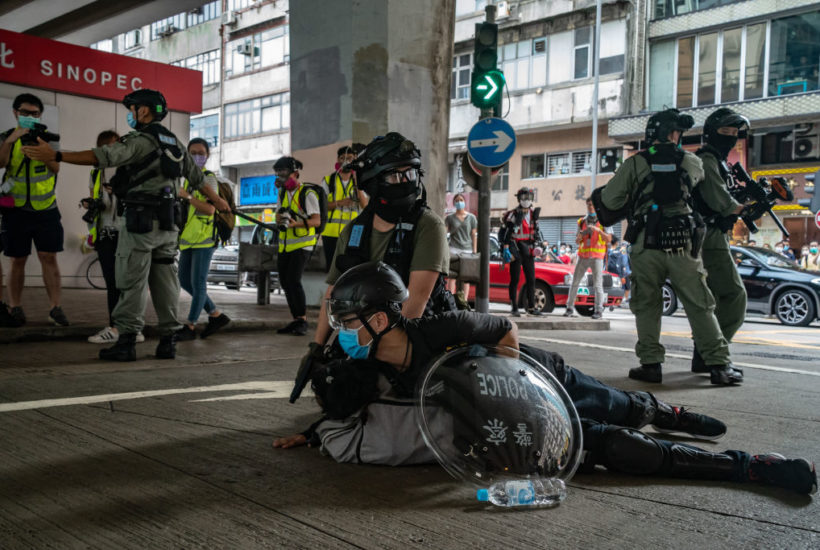 When Hong Kong was handed over from Britain to China with great fanfare on July 1, 1997, there was a cloud which hung over the process. The shadow of the 1989 Tiananmen massacre loomed large, casting doubt on whether the promises that Beijing had made in international law could be trusted.

23 years later, and Beijing has chosen July 1 to enact a constitutional coup. The handover anniversary has been chosen to theatrically signal that this is a kind of second handover, as one-country, two-systems becomes ‘one-country, one-system.’

The move is drenched in symbolism. The Chinese Communist party considers the illusion of Hong Kong’s high degree of autonomy to be so irrelevant that the city’s puppet leader, Carrie Lam, had still not seen the law hours after it had been passed. Gone are the days where the CCP’s mantra was ‘hide your strength, bide your time, never take the lead’. This is public muscle flexing. For Britain, it is a diplomatic slap in the face. They have ripped up the treaty and are flaunting its tattered pieces before the world.

Hong Kong was the only British colony where the citizens were not given the right to self-determination. Hong Kong’s people were given no say over their future. Instead, Britain took the CCP on good faith that they would keep their word, and uphold human rights safeguards. Naivety is one word for it.

Hong Kongers reacted with horror as the details of the law were revealed last night. Charges such as ‘subversion’, ‘secession’ and ‘collusion with foreign political powers’ are Orwellian: so vaguely defined that pretty much anyone from the political opposition is vulnerable to arrest. The sentencing is disproportionate and extreme, with most crimes carrying a minimum sentence of 10 years and a maximum sentence of life.

Britain must take a proportionate response. The UK government has rightly made promises to offer a pathway to citizenship to BNOs (British nationals overseas). They must now turn their words into action, and create a clear and accessible route for BNOs.

It is right that the UK is taking the lead on this, as the 1997 handover agreement increasingly looks like an historic failure in British foreign policy, peacefully ceding Hong Kong to an authoritarian state. But the British government must not stand alone. No-one born since 1997 holds a BNO passport. The irony is that this act of British magnanimity helps everyone except the youthful protesters who have captured the world’s imagination. Dominic Raab should be pressing his counterparts in the Five Eyes and the G7 to enact an international lifeboat policy.

But the British response cannot finish there. There is no going back. The death of Hong Kong signals the start of a new age in geopolitics.

There may be little Britain can do to stop China bulldozing through the Sino-British Joint Declaration, but the situation in Hong Kong has revealed a great deal about Beijing’s intentions. Hong Kong is catalyzing shifts in the geopolitical map which were already underway as a result of COVID. Diplomats are starting to consider how to reduce strategic dependency and strengthen free world countries and multilateral institutions. The new International Parliamentary Alliance on China (IPAC), which draws together parliamentarians from 14 countries, and the China Research Group in the UK have all been established with this aim.

IPAC’s statement on the passage of the National Security Law calls for ‘legislation to accelerate efforts already underway to audit and reduce strategic dependency on China’. International parliamentarians are increasingly realizing that there is little they can do to help Hong Kongers while their political systems are compromised by ties to the CCP. Pundits and commentators are starting to talk of the formation of a ‘D-10’, an alliance of 10 leading democratic countries, to counter Beijing’s pervasive global influence.

The reality is that the geopolitical map has changed whether we like it or not. The United States has a bipartisan consensus on one issue, and one issue only: China. Britain has to decide which side it is on. Beijing’s disregard for promises made in the Joint Declaration should provide a warning.