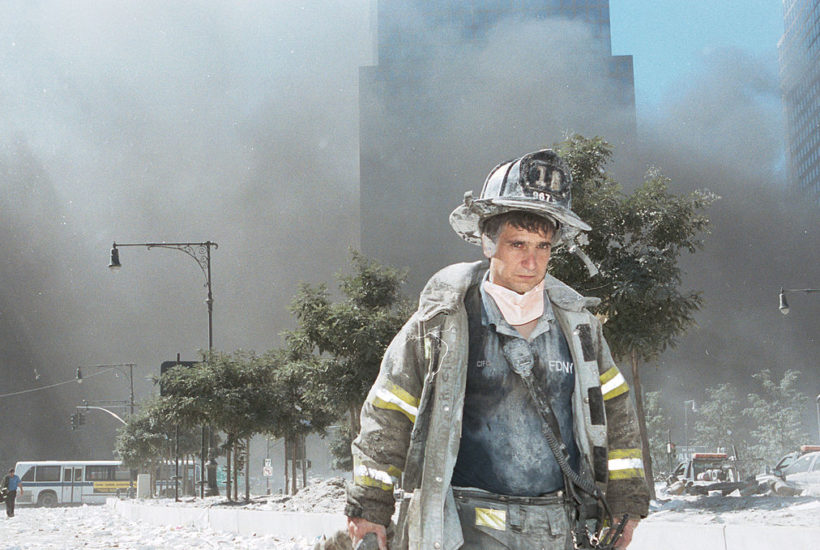 I joke, during this current lockdown, that I am glad I no longer take hallucinogens or mind alterers, but I’m serious. I don’t want to have to think too much about how the globe can pull itself back from this current economic pause, or what I would do if anyone I loved was dying and I couldn’t reach them, because of the new rules. A Taoist monk friend called it a ‘sacred pause’, and in so many ways she is right. Even though I know she was referring to more than wild nature having a rest, I wager it is noticeably nicer to be a bee or a fish right now, with a little more room to maneuver. But that doesn’t begin to cover how insane this all is for us, from the perspective of trying to keep a roof over the head, or making sure the aging mother doesn’t say to herself ‘What was the point, then?’, if she can’t say goodbye to her children and grandchildren before stepping off.

But it was different then, in the New York lockdown, after 9/11. The bummed out dream state of cycling through a city of falling ash, a metropolis smelling of the singed flesh of 2,606 humans; it all seemed to beg you to keep yourself somewhere else and inside your mind. It didn’t seem to matter that you were wandering around most days, stoned. The lockdown was also shorter, if not wildly more intense, so there was less likelihood you would become temporarily insane on narcotics or booze, as I am sure — as I know — people are doing as our current lockdown continues, with no end in sight.

There was a tangible enemy; there were ancient divisions, monumental planning, the ‘Moronic Inferno’, — all of this to get the teeth into, at least. Not the silent, clever virus, but actual, dangerous, bland — (I am thinking especially of the charmless Atta) — men and women who hated us and our lifestyle and wanted it decimated.

I watched the first tower fall from a few blocks back, as I tied up my bike for work. I didn’t want to see, but still saw, suited men and women at the windows, 1,200 feet up or more, maddened and destroyed, but at least making the last choice they made on earth to be the free-fall to death rather than asphyxiation from the black smoke and the unknown entity that was bellowing at their heels from the rear.

Straining up at this from the corner of Hudson Street and North Moore I heard an English accent; it was Shovell from the Manchester-based band M-People — an occurrence I still find a bit odd to this day. I had never met him before and have never met him since. We watched the second tower fall while remembering Manchester, while trying to take frantic calls from British family on those early flip-phones that were like bullets. (The reception had gone down and no one could get through for days).

What was in front couldn’t have been real, so we didn’t let it be real. We put it somewhere towards the back. In retrospect, the second tower coming down to the earth didn’t register at all until I went inside the restaurant where I worked and looked at the TV above the bar that was playing footage of the towers falling, on a loop. I said to my friend Gina, ‘Oh look, the second tower has fallen.’

‘I know,’ she said, ‘we just watched it together in real life, outside.

Then came the sirens, the alarm bells and police running north as the water in the taps had turned brown and gas leaks were fizzing everywhere. We ran uptown a little bit, because they shouted that we should, then we dispersed. I saw the city on my own then, in silence, as I wandered possibly for hours, possibly for a day and a half, ringing friends’ doorbells, sitting around stunned for a bit then moving on. I didn’t go back home, but just zigzagged, across town. It was only later the next day or possibly the day after, when the cordons went up at the cross streets of every 10th block, did I realize I should have tried to stay south where my home was on Stanton Street, because, even though I was certain — despite howls of derision from my friend Patti — that my American Ballet Theater class card would get me through the police and army checks (the passport being a no-go at that reckless time), I was still wary. After a few days though, money was running short. I had thousands in tips stuffed under my mattress on the Lower East Side. I tried the ballet card out on a few soldiers, and, unbelievably, it worked. I got further and further south. I frequently saw Arabs or Arabic-looking men being thrown up against walls and barked at. I was literally sailing through in comparison. A Sikh man was killed in Arizona, mistaken for a Muslim.

It was all, shall we say, horrifying.

Until I met a man called Dennis Disaster, a lanky streak of something in his late twenties with big, high unthought-out curls and no discernible qualifications in Disaster Management except for a decade of experience in turning up at calamities across the globe and sorting things out. A good friend suggested I find him, and sent me over to the West Side Highway. In a former petrol station I set up trestle tables and laid out electrolyte-enhanced drinks, energy bars, burn kits. For weeks we acted as a rest stop for the drivers of the ambulances, the firetrucks, the flat bed lorries that trundled sorrowfully up and down the highway — empty going south, piled high with smoking, twisted metal, going north. I don’t know where Dennis got the supplies, but he got many thousands of bottles of rehydrating pop, a massive supply of bandages and hundreds of tubs of petroleum jelly for burns —  all, always, topped up daily, over a period of many weeks.

Mostly we would reach up to an idling lorry cab to pass the driver the supplies, have a bit of a joke, and the truck would drive on, either towards or away from the horror. If you squinted, and forgot yourself for a moment, it could have been an episode of Taxi or Hill Street Blues, but without Danny De Vito, without a script, and without the mournful opening music.

A week or so in, it was just me and Dennis left with a skip full of Gatorades and burn creams. Other people had families, pets, lives to consider. I had started back at work but only a few shifts here and there. Every other minute there I wanted to be on the West Side Highway, doing something that had some sort of structure. It was horribly exciting, if nothing else, to be part of history.

One quieter night, at around midnight, Dennis Disaster gave me a lanyard on which I clipped a laminated card that said ‘Ground Zero Official Support’. And there was the beginning of my week of midnight runs in a massive 4×4, to the very middle of hell, to deliver the bandages and drinks to St Paul’s Chapel, the only on site refuge for the firefighters and medics and the place where they slept in shifts. The oldest church in Manhattan, now in 2020 is called — a little mawkishly — ‘The Little Church That Stood’.

As we drove into what was somewhere and something else entirely, I thought, how alien we all are anyway to each other, when we come across something so changed, so inhuman.

What steamed and sighed and lay mangled around the only standing building in sight wasn’t nice; it wasn’t good, and my memory of it has remained locked up for 19 years.

It was hissing like the moon, if the moon had been attacked by metal and wasn’t expecting to be attacked at all.