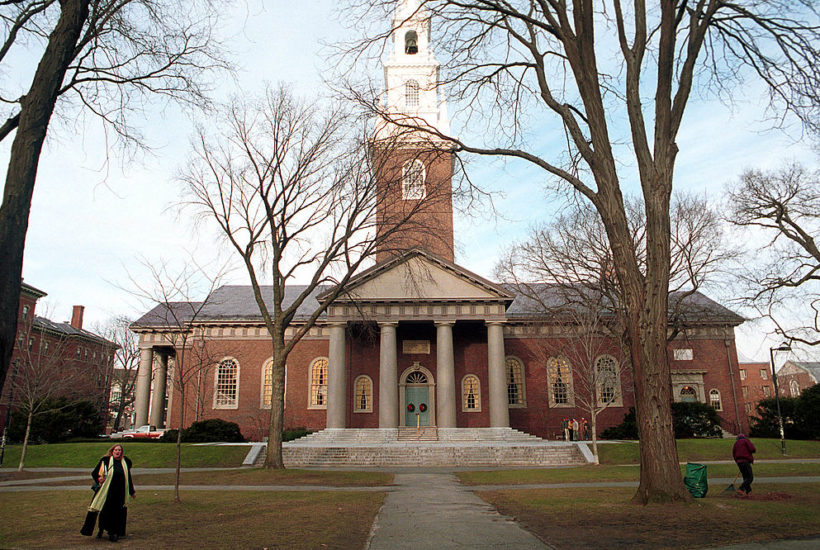 The failure of Western universities to stand up for free speech is now so commonplace it’s difficult to feel much outrage when another dissenting professor is tossed to the wolves. But on this occasion the university in question is so distinguished we really ought to sit up and take note. And for once, I don’t mean Cambridge. The vice-chancellor of Cambridge has done so much to destroy its global reputation in the last few months – what with the defenestration of Jordan Peterson and Noah Carl, and the decision to investigate the university’s links with the slave trade – that he has allowed himself a few days off. No, the university that has disgraced itself this week is Harvard. That’s right, Harvard, which has topped the Times Higher Education supplement’s World Reputation Rankings since 2011.

The story begins last January when the African American Law School Professor Ronald Sullivan joined Harvey Weinstein’s defense team. Now, it isn’t unusual for Professor Sullivan to represent unpopular clients. In the past, he has represented Aaron Hernandez, the former New England Patriots player accused of a double murder, and the family of Usaamah Rahim, a man accused of being a terrorist who was shot by the Boston Police. But his decision to represent the man at the centre of the #MeToo scandal proved too much for some radical students, who began organizing protests in Harvard Square. The chant heard most often at these rallies is ‘Believe Survivors’, the same phrase that activists used when campaigning against Brett Kavanaugh’s appointment to the Supreme Court. The implication is that the presumption of innocence should not be extended to men accused of rape or sexual assault.

On the face of it, you wouldn’t expect the Harvard authorities to take such protests seriously. After all, Thurgood Marshall, the first African American Supreme Court Justice, defended a man accused of rape. The presumption of innocence is one of the fundamental principles of American jurisprudence and it would be odd if America’s most prestigious university capitulated to a student mob that wanted to set it aside. Indeed, Sullivan himself reminded his detractors of its importance in a public email:

‘Every citizen charged with a crime is cloaked with the presumption of innocence. It is particularly important for this category of unpopular defendant to receive the same process as everyone else – perhaps even more important. To the degree we deny unpopular defendants basic due process rights we cease to be the country we imagine ourselves to be.’

But Sullivan’s critics, perhaps realizing they weren’t going to get very far arguing that Harvey Weinstein wasn’t entitled to due process, focused instead on trying to get him removed as a dean of Winthrop House, one of Harvard’s undergraduate dorms, where he has served for 10 years. This position, which Sullivan shares with his wife Stephanie Robinson, a law lecturer at Harvard, is a pastoral one and, as such, gives him some responsibility for students’ mental health and well-being. This, then, was his Achilles heel.

A change.org petition began circulating, demanding Sullivan step down as dean, arguing that his decision to represent Weinstein meant he couldn’t adequately discharge his responsibilities as a mentor and counsellor. This was expressed in various ways, all depressingly familiar to anyone who follows these academic witch-hunts. Because Sullivan is defending someone accused of rape and sexual assault, he cannot possibly make the students feel ‘welcomed’ and ‘supported’, far less ‘encouraged to raise their voices against any form of discrimination’. His ‘role as a community leader’ means ‘the safety of the students’ should ‘always come first’. His involvement in Weinstein’s case is ‘not only upsetting, but deeply trauma-inducing’ for ‘victims of sexual assault and rape’ at Harvard. The presence of Sullivan at Winthrop House ‘induces a great amount of fear and hurt in victims of the crimes Weinstein is accused of’. Etc, etc.

Similar arguments were used last year by campus activists calling for the sacking of James Moore, a University of Southern California professor who sent an email to students expressing his support for due process in the Harvey Weinstein case and questioning the ‘believe the victim’ approach. Two student leaders accused him of damaging the mental health of sexual assault survivors. ‘Professor James Moore has created a hostile environment in which many survivors of sexual assault do not feel safe,’ they wrote.

More recently, a group of left-wing students at the University of the Arts in Philadelphia started a change.org petition to have Camille Paglia fired as a professor and replaced by ‘a queer person of color’ because she, too, expressed some skepticism about the #MeToo movement. According to the petition, such sentiments put her students ‘in danger’.

There are so many things wrong with this line of attack it’s hard to know where to begin. For one thing, there’s scant evidence that hearing professors or deans standing up for due process in rape or sexual assault cases induces ‘trauma’ in their students who’ve been the victims of such crimes, or that it makes them feel ‘unsafe’ – and, incidentally, the number of students who fall into this category is tiny.

One of the most authoritative studies carried out in the US, using data from the National Crime Victimization Survey, found that between 1995 and 2013 the incidence of rape among female college students was 1.4 per 1,000. (If you include sexual assault, it rises to 6.1 per 1,000.) The change.org petition calling for Sullivan’s scalp claimed that ‘sexual assault and rape on campus…has now reached new, unparalleled heights’. In fact, rapes and sexual assaults of female college students in the US fell by more than 50 percent between 1997 and 2013 and in the same period the rate of rape and sexual assault was 1.2 times higher for non-students than for students.

That doesn’t mean there aren’t any victims of such crimes among Winthrop House’s 400 or so residents, but there’s no reason why Sullivan’s joining Weinstein’s defense team should be ‘trauma-inducing’ for them. After all, acting for Weinstein isn’t tantamount to expressing skepticism about the veracity of their stories, or, indeed, the truthfulness of Weinstein’s accusers. Far less is it an expression of sympathy for Weinstein or other powerful men accused of sex crimes. As Sullivan has said in his own defense, everyone is entitled to due process, including the most reviled. He is not in any sense ‘siding’ with Weinstein. Rather, he is just affirming his conviction that civil liberties and constitutional rights should be extended to all US citizens.

To date, the only half-decent argument that’s been made against Sullivan being able to combine these two roles is one put forward by the feminist intellectual Catharine MacKinnon, also a professor at Harvard Law. For her, the issue turns on whether ‘sexually abused students can feel comfortable confiding in’ a dean who’s representing ‘a credibly accused multiple perpetrator of sexual assault’. She doesn’t categorically say they can’t, but she thinks it’s ‘an equality question’ for him and Harvard to consider.

The rebuttal to this was set out by yet another Harvard Law School professor – Randall Kennedy, although he wasn’t specifically addressing MacKinnon’s point. In a piece for the Chronicle of Higher Education, he wrote:

However, just in case there is a risk that a ‘sexually abused student’ may not feel comfortable confiding in him, Sullivan has identified another member of the Winthrop House team as someone students can talk to if they want to report a sexual assault.

You would have thought this would be enough to satisfy the Harvard authorities, but to safeguard Sullivan’s job some 52 members of the Harvard Law faculty wrote a letter to the Boston Globe, urging the university not to act on student calls for his dismissal. ‘We view any pressure by Harvard’s administration for him to resign as faculty dean of Winthrop, because of his representation or speaking on behalf of clients, as inconsistent with the university’s commitment to the freedom to defend ideas, however unpopular,’ they wrote.

But the Dean of Harvard College, a sociology professor named Rakesh Khurana, said after a meeting with Sullivan that he took ‘seriously’ the concerns expressed by the activists and said ‘more work must be done to uphold our commitment to the well-being of our students’. Those were no empty words, either. A few days later, he announced Harvard would carry out a ‘climate review’ of Winthrop House, an example of bureaucratic gobbledygook that didn’t bode well for Professor Sullivan. As he pointed out in the New York Times: ‘Never in the history of the faculty dean position has the dean been subjected to a “climate review” in the middle of some controversy.’

Sure enough, Khurana announced the outcome of the review on Saturday: Sullivan and his wife’s employment as faculty deans of Winthrop House would end on June 30.

As someone who spent a year at Harvard as a Fulbright scholar and enjoyed being exposed to a wide range of different political perspectives, I’m deeply disappointed by this decision. Other, lesser universities have invoked the ‘hostile environment’ or ‘climate’ argument to justify punishing professors who’ve been targeted by social justice outrage mobs, but it has generally been dismissed by anyone who cares about intellectual freedom. Why? Because if you accept that certain points of view or positions should be prohibited because they might upset students or make them feel ‘unsafe’, you are effectively saying that free speech is less important than protecting students’ feelings. That’s particularly pernicious if there’s no ‘reasonable person’ standard, so all that matters are the subjective feelings of students, as reported by politically-motived activists to college administrators.

Now that an institution with the reputation of Harvard has accepted this principle it will make it harder for defenders of intellectual freedom at other, less prestigious institutions to stand up to the campus diversocrats. ‘Look,’ they’ll be able to say. ‘Harvard got rid of Ronald Sullivan as a dean for creating a hostile environment. If it’s good enough for Harvard, it’s good enough for us.’

Luckily, not all college administrators are as spineless as Rakesh Khurana. In response to the calls to fire Camille Paglia, the President of Philadelphia’s University of the Arts, David Yager, demonstrated real moral leadership. I will leave you with his inspiring words:

‘Unfortunately, as a society we are living at a time of sharp divisions – of opinions, perspectives and beliefs – and that has led to decreased civility, increased anger and a “new normal” of offense given and taken. Across our nation it is all too common that opinions expressed that differ from another’s – especially those that are controversial – can spark passion and even outrage, often resulting in calls to suppress that speech.

That simply cannot be allowed to happen. I firmly believe that limiting the range of voices in society erodes our democracy. Universities, moreover, are at the heart of the revolutionary notion of free expression: promoting the free exchange of their ideas is part of the core reason for their existence. That open interchange of opinions and beliefs includes all members of the UArts community: faculty, students and staff, in and out of the classroom. We are dedicated to fostering a climate which is conducive to respectful intellectual debate that empowers and equips our students to meet the challenges they will face in their futures.’