Donald Trump and the unreality of a two-state solution 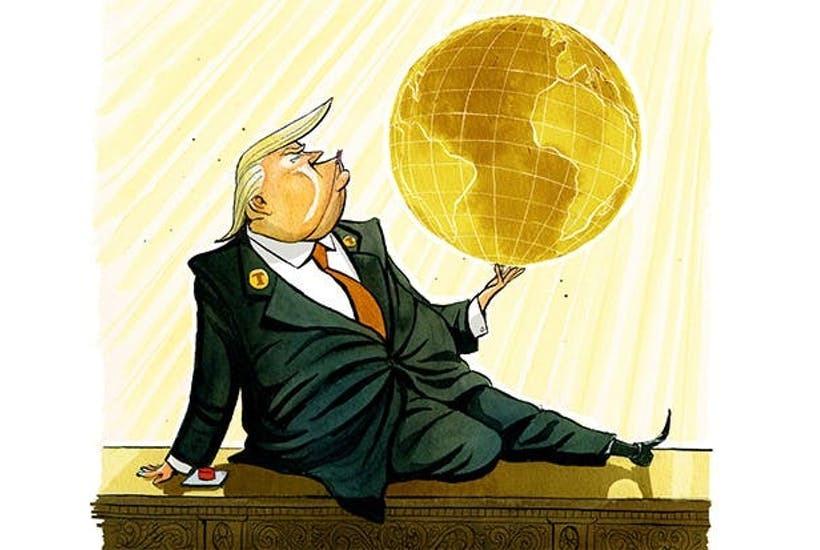 The AIPAC conference, that annual celebration of the triangular romance between America, Israel and American Jews, concluded last night with the traditional protestations of undying love, democratic compatibility and common values. Meanwhile, AIPAC’s identity crisis deepens, and a redefinition of the goals of the American-Israeli relationship looms.

AIPAC is studiously bipartisan, but the maladroit policies of the Bush and Obama administrations and the rightward turn of Israeli politics since the Second Intifada have made Israel a partisan issue in American politics. A recent Pew survey found more polarization than at any point in the last four decades: 79% of Republicans sided with Israel, but only 27% of Democrats.

Benjamin Netanyahu, harried at home by corruption allegations, judicial enquiries, coalition partners and the right wing of his own Likud party, received the standing ovation from AIPAC that he never gets in Israel. The last time Netanyahu received this treatment was in 2015, when he accepted Congressional Republicans’ invitation to address Congress. That speech was a final attempt to dissuade the Obama administration from making a nuclear deal with Iran. AIPAC opposed the deal too. Obama steamrolled them both, then gave a parting snub of an anti-Israel resolution from the UN Security Council,

What a difference a year makes. Obama is gone, and so is Hillary Clinton. The US Embassy will open in Jerusalem in May, to mark Israel’s seventieth birthday. The Palestinian Authority is under unprecedented pressure to stop creating incentives for terrorism by paying pensions to the families of ‘martyrs’. Mahmoud Abbas is furious and has refused to speak to the Americans. So Israel is in a better position—for now. And is that position, as the old saying goes, good for the Jews?

As Trump said recently, the embassy move is a gift that Israel will expected to reciprocate when he launches his ‘deal of the century’—the twentieth century, that is. Judging from theleaks in the Arab press, Trump’s plan will try to revive the dead Oslo Process. His proposals will be slightly less generous to the Palestinians than the Clinton-Barak offer to Arafat in 2000 and the Bush II-Olmert offer to Abbas of 2008. Both of those offers had the support of the Quartet. Neither elicited a reply from the Palestinians.

Netanyahu, as usual, is relying on the Palestinians to spare him having to negotiate. But the Oslo game and the ‘two-state solution’ are dead—killed by the post-2000 war of suicide bombings and the rise of Hamas. As AIPAC convened, the settlers and the pro-annexationist Land of Israel caucus in the Knesset denounced as false AIPAC’s claim that the US and Israel still support a two-state solution.

Trump’s support for the two-state solution is conditional: he has said he would support it if the parties wanted it. They don’t. In a rare point of concord, both Israelis and Palestinians have tired of the notion. If Netanyahu ever believed in two states, he doesn’t now. American Jews, on the other hand, still do, and so does the State Department. But they are not the ones living with Hezbollah and Iran on their northern border, ISIS on their southern border, and Hamas as the people’s choice among young Palestinians.

Nor have American Jews and the State Department fully digested the changes in the Middle East over the last decade: the American withdrawal, the failure of the Arab Spring, the belligerence of Turkey, and the rise of Russia and Iran. The Palestinians are less important than they were. They are an obstacle to the emerging Israeli-Saudi alignment, but they have lost their veto over normalization.

No one knows what will happen next between Israel and the Palestinians, but everyone knows enough to know that it won’t be pretty: a one-state solution in a winner-takes-all region, and bloodshed which will further polarize Israel as an issue in America’s domestic politics and its dealings with foreign powers. Hence the two-state noises from AIPAC and the State Department, and the conditional nods from Trump and Netanyahu. As if to confirm the unreality of the two-state charade, the only person telling the truth right now, that Oslo is over and there will be no two states, is the Holocaust-denying, Swiss-banking Mahmoud Abbas. But he wasn’t at AIPAC.