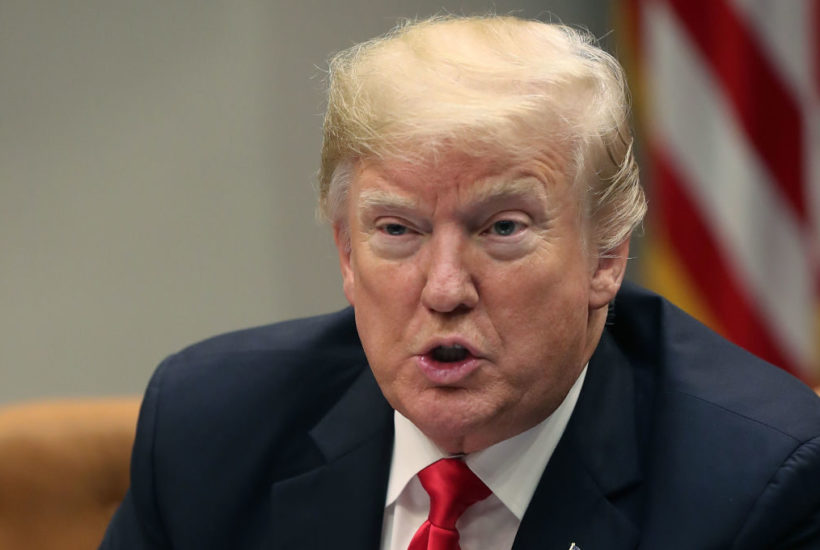 He was asked by a Fox News reporter if he shared responsibility for ‘the FBI’s reputation taking a big hit’. Comey said he did not. ‘The FBI’s reputation has taken a big hit because the President of the United States with his acolytes has lied about it constantly. And in the face of those lies, a whole lot of good people who watch your network [Fox News] believe that nonsense. That’s a tragedy. That will be undone eventually, but that damage has nothing to do with me.’

Trump’s nickname for Comey is ‘showboat’ and, as so often with the President’s playground taunts, there is an element of truth to this. Comey’s sin appears to be pride, and mainly pride’s most infuriating manifestation: smugness. When General Flynn admitted his guilt a year ago, Comey quoted a verse from the Bible: ‘…let justice roll on like a river, righteousness like a never-failing stream!’ – wittily posting a photograph of the Great Falls of the Potomac.

It sometimes seems as if Comey confuses himself with the river.

Yet, on Capitol Hill yesterday there was something magnificent in his contempt for Trump and Trump’s enablers in Congress. ‘At some point, someone has to stand up and in the face of fear of Fox News, fear of their base, fear of mean tweets, stand up for the values of this country and not slink away into retirement but stand up and speak the truth.’

You could conclude many things from these remarks – among them, that if the President ever loses Fox News, he’s really in trouble.

For a moment, on Monday, this is exactly what happened. Judge Andrew Napolitano, a regular Fox contributor, told Shepard Smith, the mid-afternoon anchor, that there was ‘ample evidence’ to indict Trump. Perhaps, he implied, this had already happened, in secret.

He began by saying: ‘Last week in a federal direct court here in New York City, a federal judge at the end of Michael Cohen‘s sentencing said the president orchestrated and paid for this crime.’ The crime in question was a felonious campaign finance violation, Cohen paying two women for their silence about Trump days before the election.

‘Yes,’ Napolitano answered. ‘There’s ample evidence – this doesn’t require too much analysis – to indict the president, the question is do they want to do it. The DOJ has three opinions in this: two say you can’t indict a sitting president, one says you can, but all three address the problem of ‘what do you do when the statute of limitations is about to expire?’ All three agree in that case you indict in secret, keep it sealed and release it the day he gets out of office.’

In fairness, Smith’s show is a rare discordant voice on Fox. So how likely is it that the President has been indicted under seal, or could be? Putting on his wig and gown, Cockburn turns to the two opinions cited by Napolitano that both say a President cannot be indicted. One is a well-known memo written in 2000 by the Office of Legal Counsel in the Department of Justice. This in turn draws on another memo, written after Watergate. These documents – and other opinions that might be relevant to United States v. Donald Trump – have been collected on the Lawfare blog. But as Lawfare says, both of these memos are legal opinions not binding on prosecutors – after all, there are always more legal opinions. Robert Mueller and his prosecutors could turn instead to a memo written in 1974 for the Independent Counsel Leon Jaworski as he considered whether or not to indict President Nixon. The memo said ‘there was ‘nothing in the language or legislative history of the Constitution that bars indictment of a sitting president.’

It’s true that the memo also goes on to say there are a number of ‘policy factors’ that weigh heavily against indictment. So in United States v. Nixon, Jaworski decided to make Richard Nixon an unindicted co-conspirator – exactly the position that Napolitano speculates Trump is in. Today, Department of Justice policy remains that a sitting president cannot be indicted. However, Laurence Tribe, the famous Harvard lawyer, says the policy is ‘probably unconstitutional’. That’s just Tribe’s opinion. It rests on Article 1, Section 3 of the Constitution.

‘Judgment in Cases of Impeachment shall not extend further than to removal from Office, and disqualification to hold and enjoy any Office of honor, Trust or Profit under the United States: but the Party convicted shall nevertheless be liable and subject to Indictment, Trial, Judgment and Punishment, according to Law.’

Tribe says that if a president were impeached and convicted by Congress, his vice president could just come along and pardon him. So, he argues, ‘liable and subject to Indictment, Trial, Judgment and Punishment’ must mean a president can be charged before he’s impeached. This seems to Cockburn to be stretching the Founding Fathers’ views to fit current circumstances. The most natural reading of Article 1.3 is that a president could be tried in the ordinary criminal courts after he is ejected from office by the mechanism of impeachment.

All this is no doubt being debated in the Department of Justice. For the time being, the policy seems to be that a President cannot be indicted. And Robert Mueller seems to be following that policy. But, in extreme circumstances perhaps, his immediate boss Rod Rosenstein could make a new policy – turning to the Jaworski memo or to Professor Tribe’s argument. It might be important to do this so that the statute of limitations does not run out on the campaign finance violations or other allegations Trump faces. Napolitano’s view is that the way out of this is a secret indictment that comes into force the moment Trump leaves the Oval Office for the last time. In that case, Trump might need to win the next election, in 2020, to stay out of jail. As in the authoritarian states that Trump admires, in the United States, too, winning elections would then become a matter of personal survival.