Donkey Dow: a load of Bullocks 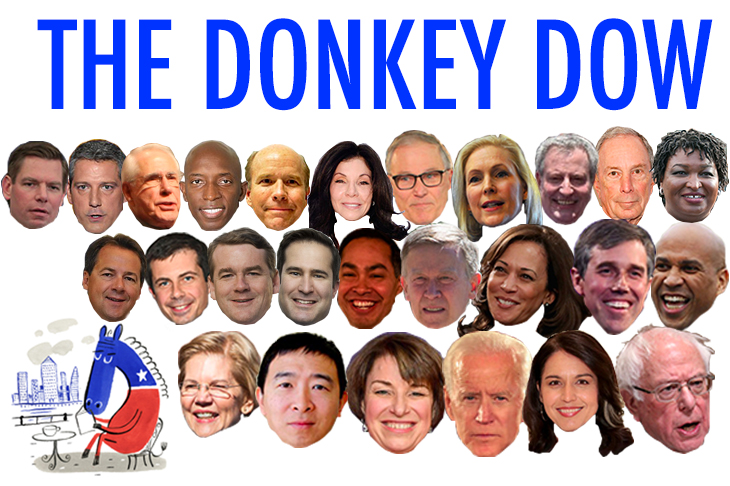 Cockburn is introducing the Donkey Dow: a round-up of the movers and shakers in the race to face up against Donald Trump. Here’s how the candidates and contenders fared over the last few days. 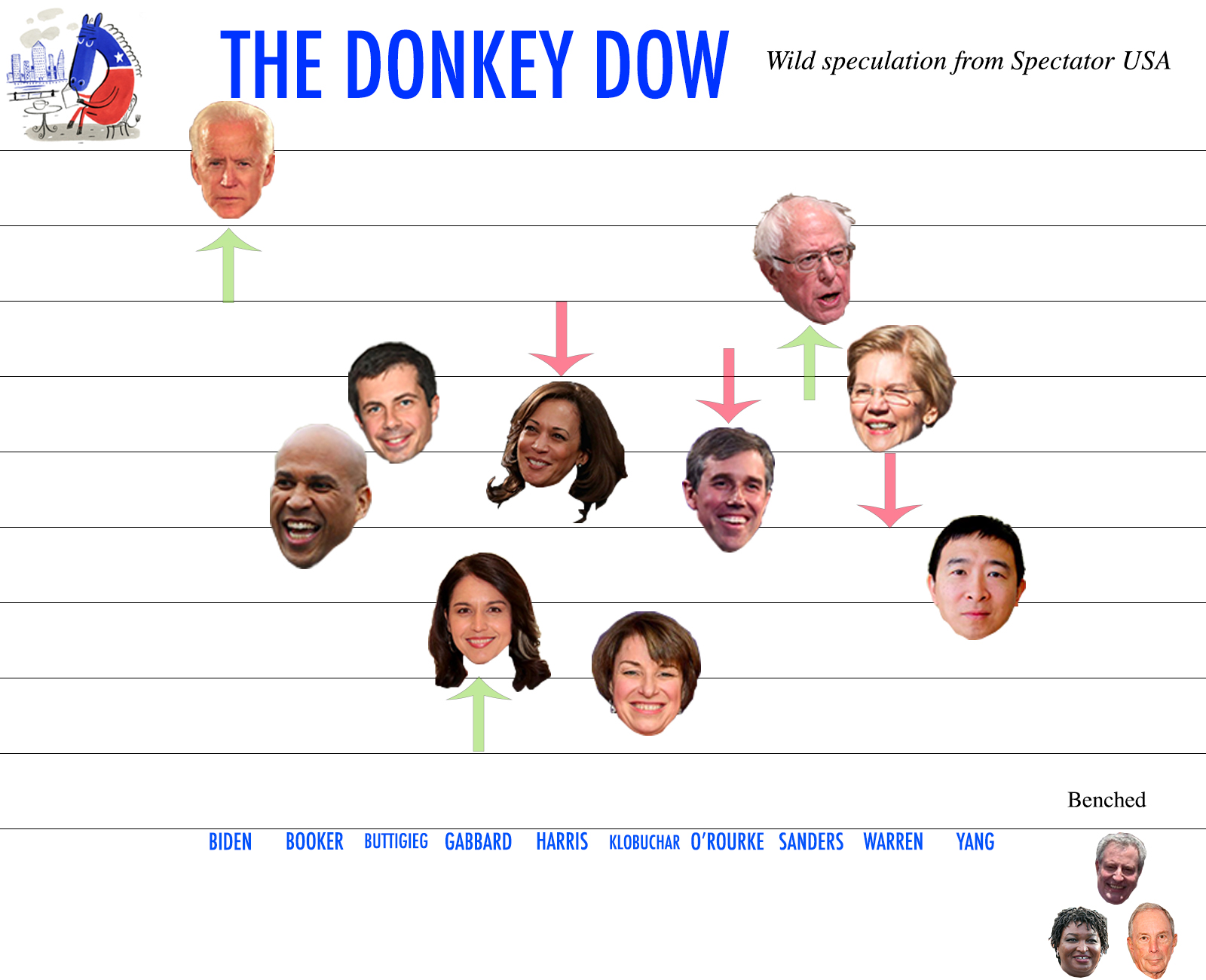 If the field wasn’t already crowded enough, this week saw Steve Bullock, our 23rd Democratic candidate, announce his run. So in honor of the rural governor, welcome to the cattle market…

Tulsi Gabbard took the bull by the horns with a video attacking ‘Saudi Arabia, Netanyahu, al-Qaeda, Bolton, Haley and the other neocons and neolibs’ as they supposedly induced Trump’s desire for war in Iran.

Trump says he doesn't want war with Iran, but that's exactly what he wants, because that's exactly what Saudi Arabia, Netanyahu, al-Qaeda, Bolton, Haley, and other NeoCons/NeoLibs want. That’s what he put first–not America. pic.twitter.com/kAPyxlKXDs

Say what you like about the targets she’s selected (are al-Qaeda neolibs?), the Hawaii congresswoman certainly found a great way to stand out from the herd.

Bernie Sanders headed for pastures new as he appeared with Rep. Alexandria Ocasio-Cortez twice to lament mediocre progress on green initiatives. Standing alongside the 29-year-old, who worked on his 2016 campaign, may ‘steer’ Bernie back on track, after Biden swiped his front-runner status.

Speaking of Joe Biden: President Trump is eager to start beef. The Donald declared himself ‘sharper and better-looking’ than Uncle Joe. Trump’s attempts to lock horns directly with the 76-year-old are said to be drawing winces from GOP strategists, and Biden now trumps Trump in Arizona and Pennsylvania polls. Could he send the president to the abattoir in 2020?

Another ‘dairy’ bad display from Beto O’Rourke, who expressed regret at announcing his campaign via Vanity Fair cover. Biden, Bernie and Buttigieg have left Beto chewing the cud, so he’s fallen back on old habits, like live-streaming things he shouldn’t…

Beto is livestreaming his haircut pic.twitter.com/xAuBtC7BWe

Also milking it was Kamala Harris. First, her husband documented her ‘calf’-hearted Mother’s Day efforts (look at how fresh the apron is!). Then she quipped of a Biden-Harris ticket, ‘I think that Joe Biden would be a great running mate. As vice president, he’s proven that he knows how to do the job.’ And following in the footsteps (hoof-prints?) of her colleague Elizabeth Warren, she announced she wouldn’t host a town hall on Fox News. For Warren, as one of the more leftist candidates, not going on the dominant right-wing channel may make more sense: while she may ostracize potential supporters on the right, she may win some from the left. Harris’s record is more centrist, and her poll numbers are less certain. If they dwindle further, don’t be surprised if she’s cowed into submission.

Neither here nor there

Pete Buttigieg went on The Tonight Show with Jimmy Fallon, the tamest room in late-night. As well as delivering a witty (and meticulously prepared) zinger about Trump comparing him to Alfred E. Neuman, Mayor Pete ‘slow-jammed the news’, a segment which President Obama had appeared on back when people actually watched Fallon. Yes, we get the parallel, it’s udderly obvious.

Andrew Yang drew a crowd of 2,500 to lower Manhattan last night, where he talked up his UBI proposal until the cows came home. But New York City is one thing – does enthusiasm for the Yang Gang stretch to crucial states like Iowa, or Wisconsin, America’s Dairyland? Because that’s where Yang needs to make a ‘veal’ impact…

The aforementioned Bullock from Montana made much of the fact that he’s a blue governor in a red state when he announced. He also swiftly tried to cheese off the president by releasing 14 years of his tax returns, something Trump has still yet to do. Apparently Big Lebowski star Jeff Bridges convinced Governor Steve to throw his hat into the ring, and he’s secured more than $1 million in donations in his first 24 hours. But is Bullock a cash cow? Or even a dark horse?

Last week, Cockburn was mooing with delight at the hilarious prospect of Bill ‘Fix the Subway’ de Blasio running for president. Disappointingly, Blaz denied that he was planning to announce yet. But as if by bovine intervention, the New York mayor and his wife are scheduled to appear on a live broadcast of Good Morning America from Times Square tomorrow. Kamala Harris and Seth Moulton also unveiled their plans on the popular morning show. Come on Bill, missing the party would be a mis-steak. Cow-nt us in.