In memory of a piano master 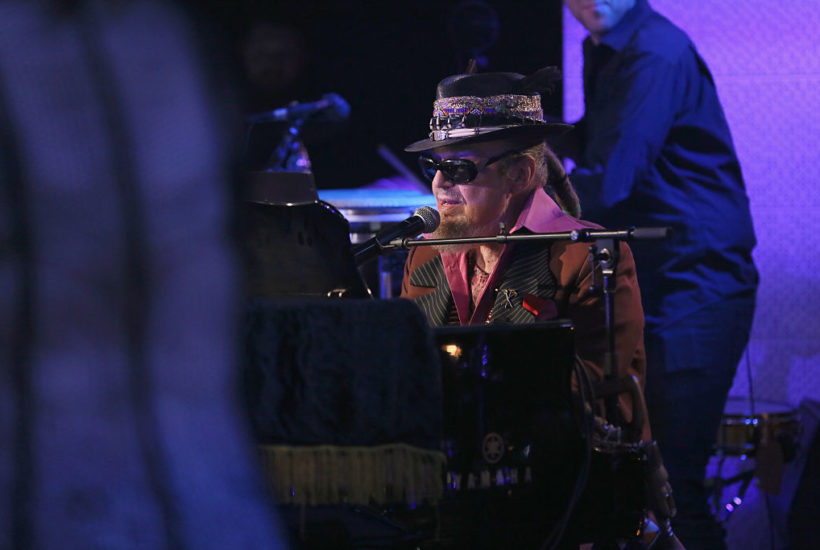 If they asked me, I could write a book about Dr John, who died on Thursday aged 77. He was a sideman, a showman, a kind of performance artist with his Dr John Creaux the Night-Tripper alter ego and the music-hall voodoo of songs like ‘Walk on Gilded Splinters’, a songwriter but, above all, a piano player whose every phrase could only have come from his native New Orleans.

In 1956, when he was 14 and still Malcolm John Rebennack, Jr. the son of an appliance vendor who fixed record players and sold records, Dr John met Professor Longhair, who was no longer Henry Royland Byrd and who had developed a piano style which combined a rolling, rhumba-influenced left hand with a flamboyant, bluesy right hand. From Professor Longhair, there flowed the New Orleans piano style that was carried around the world as ‘rock’n’roll’ by Longhair admirers like Fats Domino and Huey ‘Piano’ Smith, and then from the Sixties onwards, as the soul and funk of Allen Toussaint, The Meters, and Dr John.

If you want to read an excellent summary of Dr John’s career, which ranged from an apprenticeship in New Orleans bars to studio work for Phil Spector in the Sixties and then to global recognition, Adam Sweeting has written a good obituary for the Guardian. I thought I’d write about how it is that Dr John’s music, described by him and everyone else as a New Orleans gumbo, actually works in ‘Such a Night’ (1973). After Dr John sang it with The Band in The Last Waltz, this became his best known composition. While his treatment of Professor Longhair classics like ‘Tipitina’ show how close his piano playing remained to the blues and to New Orleans, songs like ‘Such a Night’ show how Dr John integrated that heritage with other traditions of American songwriting.

The 8-bar progression that defines ‘Such a Night’ resembles those of two earlier masterpieces of nocturnal enchantment, Jimmy McHugh’s ‘I Can’t Believe You’re in Love with Me’ (1926) by with lyrics by Clarence Gaskill, and Will Hudson and Irving Mills’ ‘Moonglow’ (1933), with lyrics by Eddie DeLange. It’s a clever and harmonically rich progression, and it surprises us each time it cycles around by beginning on the IV chord, not the I chord; or, for players who don’t have to call or signal the changes on a bandstand, the subdominant and the tonic.

The first chord is a G major seventh, but the second suggests the bittersweet complexities of love by shifting to G ‘minor-major’, which retains the open major seventh but flattens the third along with the underlying mood. The third chord, a tonic D chord, temporarily resolves the dialectic of romance and reality, but simultaneously falls away and rises, via a passing F# triad over C#, a B minor and then a D seventh. As the bass slides down beneath the lovers’ feet, the rising chromatic harmony A-A#-B-C emerges like a trombone or clarinet glissando from the New Orleans of the Twenties or even earlier, and returns us to the top of the cycle.

Back on G major seventh, we realize that its characteristic note, F#, was the common tone in that D – F#/C# – B minor – D seventh sequence. Schnitzler took the image of a merry-go-round for the interwoven stories of enchantment, disenchantment, and re-enchantment in La Ronde. If music talks, this kind of cycle is a philosophy of modern love.

‘I Can’t Believe You’re in Love with Me’ and ‘Moonglow’ adhere to the conventions of the AABA standard. After two cycles through the eight-bar A-section, McHugh changes key by stepping onto the III chord (the mediant) and working his way back to the IV chord at the start of the last A-section by a ‘cycle of fourths’. Hudson and Mills also follow a cycle of fourths, but theirs begins on the Tonic, and changes the mood by emphasizing a bluesy dominant seventh. Dr John uses a fourth change too, but in a way that tells us much about his place in American music.

He repeats a chorus line, ’If I don’t do it, then someone else will’ over a I-IV chordal repetition, D to G. This I-IV change is the most basic of blues changes. Instead of reaching for foxtrotting elegance, Dr John digs into the groove. It’s this that places him two musical generations after Professor Longhair and one generation after Fats Domino, and squarely in the generation of Lee Dorsey and The Meters. So in one song, we hear the New Orleans’s piano tradition and the evolution of pop songwriting from their origins to the Seventies.

To follow how this music filters into the unlikeliest places over those decades, you could trace Professor Longhair’s version of ‘Stag O’Lee’ to Dr John’s ‘Stack-A-Lee’ from his tribute to New Orleans’ music Gumbo (1972), and then to The Clash’s London Calling (1979) and the prologue to ‘Wrong ‘Em Boyo’, a tune whose horns draw on another New Orleans classic, Frankie Ford’s ‘Sea Cruise’.

Or you could listen to Dr John’s solo treatment of a tune like ‘I’m Confessin’ (That I Love You)’ and realize what his music represents and what we have lost. The song was first credited to Chris Smith and Sterling Grant, and recorded by Fats Waller in 1929; then given new lyrics by Al Neiburg and, with the same tune now credited to Doc Daugherty and Ellis Reynolds, recorded by Louis Armstrong in 1930. To hear Dr John play this kind of tune in that kind of way in the early 21st century was a kind of musical time travel.

‘For those who like that sort of thing,’ Muriel Spark’s Miss Jean Brodie says, ‘that is the sort of thing they like.’