Republicans should drop Kavanaugh now, before they harm themselves for a generation

I still believe her 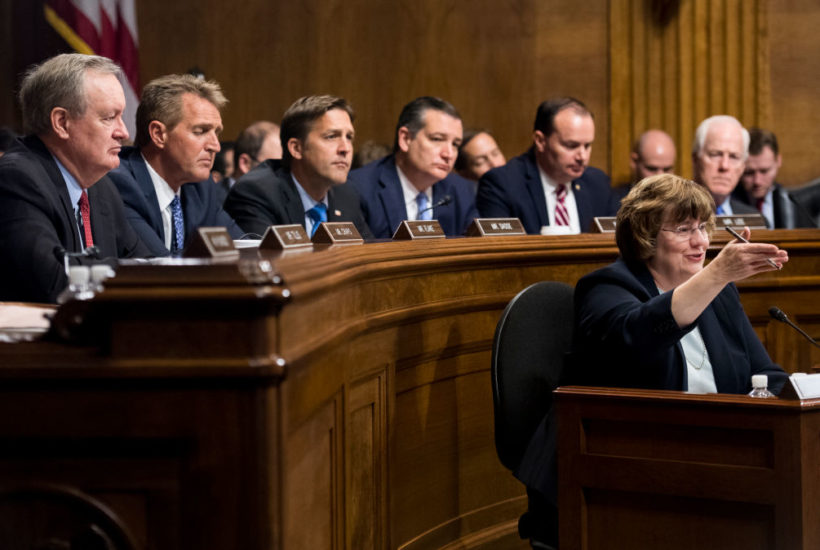 Remember how the Democrats tried to block Neil Gorsuch’s nomination to the Supreme Court by dredging up accusations of sexual assault? You don’t, because they didn’t. The Democrats played dirty politics against Gorsuch, but there were no allegations of sexual assault about Gorsuch, because there was no smoke from which to fan a fire. So Democratic attempts to block Gorsuch’s nomination turned on his judicial record. Now consider the considerable amount of smoke summoned by Brett Kavanaugh’s nomination.

I reckon I might have been the first and only voice in a right-of-centre publication to say that Christine Blasey Ford’s accusations against Kavanaugh had enough of the ring of truth to render Kavanaugh unsuitable for the Supreme Court. I received a torrent of abuse on Twitter for saying that, almost all of it from men. Tonight and tomorrow, I expect other voices to arrive at the conclusion that I did, and to admit this in publications that have attacked Blasey Ford. But I suspect that the public will not allow them, or the Republicans, to ‘move on’, as the saying goes, as quickly as they would like to.

The Republicans and almost every other conservative commentator have publicly attacked Blasey Ford as a liar. The same politicians and pundits would have backed far less plausible claims, had they arisen against a Democratic nominee to the Supreme Court. There are legitimate concerns about the accusations against Kavanaugh — the politicising of Supreme Court appointments, the possibility of trial by media — but to only raise these concerns when your team is in trouble is a failure of responsibility. The voters, and women voters especially, will not forget this insult to their intelligence.

Conservatives who claim that her case is a Democratic ‘hit job’ are succumbing to conspiracist fantasies. They ask us to believe that Blasey Ford lied to her husband when she told him before her marriage that she had suffered a sexual assault; that she laid a trap for Kavanaugh in her therapist’s office; that her therapist and husband are parties to a plot; and that she has contrived symptoms of PTSD. Perhaps they can find Obama’s birth certificate down the back of the sofa while they’re at it.

Watching Blasey Ford’s opening statement and questioning this morning before an almost entirely male panel, I am more sure than ever that she is telling the truth. Either that, or she is a better character actor than Meryl Streep. There are no serious grounds to believe that this is a case of mistaken identity either.

Nothing in Blasey Ford’s demeanour, her statements or her responses suggested that she is doing anything other than telling the truth. Everything about her traumatised manner, her detailed statements and responses has the ring of credibility. As Democratic senator Sheldon Whitehouse of Rhode Island said, her account matches prosecutorial standards of ’preliminary credibility’, and its details are ‘consistent with the known facts’.

Everything in Blasey Ford’s account also accords with what everyone who moves in circles associated with ‘elite prep schools’ — and ‘elite’ universities too — knows is a serious problem in male behaviour. The problem has two faces, the entitlement of spoilt princelings, and its supercharging by heavy drinking into forms of dangerous and criminal idiocy. This kind of perverted male camaraderie is not high spirits, unless high spirits is the ‘uproarious laughter’ of two boys as one of them assaults a 15-year old girl.

Brett Kavanaugh has denied all and any elements of Blasey Ford’s testimony. So this case, greyed with drink and memory, comes down to a black and white decision. I don’t care whether the winners and losers are liberals or conservatives, or whether they’re men or women. This is a watershed moment, and the responsiveness and credibility of America’s governing institutions are at stake.

Republicans and conservatives have climbed up a tree out of misplaced party loyalty and masculine blind spots. They still have time to climb down. They need to do so quickly, before they confirm every negative stereotype about them. They need to get out of the echo chambers of their social media and the closed rooms of their political strategizing, and understand that they are insulting more than 50 per cent of the electorate.

Donald Trump, who routinely insults more than 50 per cent of the electorate, wants to leave a Supreme Court that will lean conservative for years. Kavanaugh is not the only possible conservative nominee for the bench, but he is no longer a credible one. There are bound to be more allegations against him. True or not, they will damage the dignity of the Supreme Court at a time when America needs its institutions to work. If Trump and the Republicans stick with him, they will damage the Court, the presidency and their party. Out of self-interest, if nothing else, they need to drop Kavanaugh before he takes them down with him.