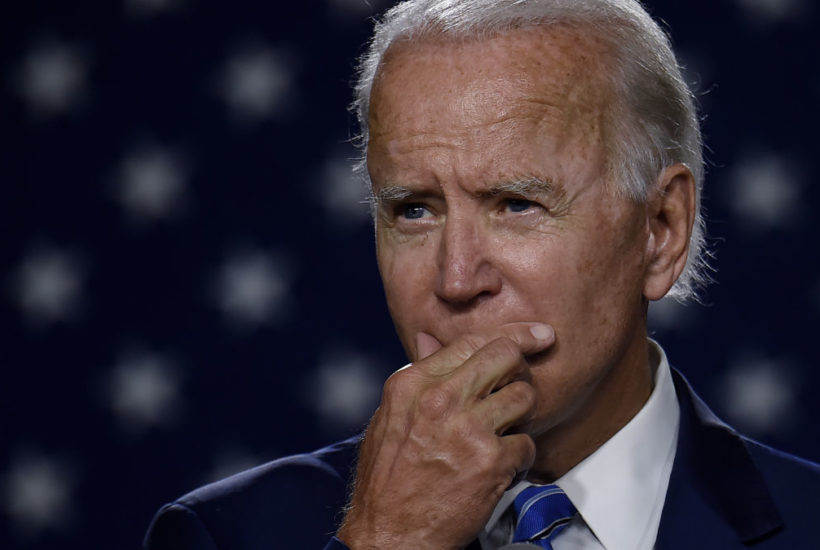 For too long, Republicans and the media refused to take Joe Biden seriously as a presidential candidate. It’s hard to blame them. The former vice president may poll well, but his previous tilts at the White House had been disastrous. His 2020 campaign has been a string of awkward public gaffes and senior moments — the old boy just isn’t all there. Even his staff seem embarrassed by their candidate. America may be the United States of Amnesia, as Gore Vidal called it, but surely it isn’t about to elect Dementia.

Or so we thought. Biden’s clear and present mental degeneration, the elusiveness of his own mind, makes him a strangely effective candidate. It’s hard to oppose, let alone revile, a man who often seems to have no idea what he is saying. Biden elicits a combination of sympathy and apathy, yet he keeps surging ahead in the polls. Unless Donald Trump stages a most extraordinary comeback, or the polls are wildly wrong, Joe Biden will become America’s commander-in-chief on January 20, 2021.

This edition of The Spectator explores what that might mean. Team Biden talks a lot about change and ‘transforming’ America. In reality his presidency is most likely to mean a restoration of the era of Barack Obama — a reversion to the status quo ante Trump. For millions of Americans the promise of Biden is a return to normality and relative calm — after four exhausting years of acrimony and political tribalization following the 2016 election: anything for an easy life.

But would a Biden administration make life easier for most Americans? Many moderate Democrats and independents are drawn to Biden’s campaign because they perceive him to be an old-fashioned, middle-of-the-road Democrat. He recently talked about people being ‘woked’ rather than ‘woke’, which suggests a pleasing lack of familiarity with militant 21st-century identity politics. The worry, however, is that Biden’s frailty — and the fact that he may well not even complete his first term — make him a Trojan horse candidate for a radical left that could never hope to win at the ballot box. But it’s hard to tell. As Matthew Continetti writes, Biden has made overtures to the party’s left wing, but his legislative priorities are conspicuously elusive.

For now, Biden’s curious indefinability is useful. He means different things to different Democrats. That could all change as Election Day approaches and his candidacy comes into sharper focus. At press time, he still had not chosen his vice-presidential candidate — a decision which, more than any of his policy ‘task forces’, will indicate which direction his administration might take.

If Biden’s leadership follows Obama’s ‘hope and change’ path, that would mean at least four years of disappointment and stasis — no change, even less hope. As David J. Garrow argues, the achievements of the Obama presidency have already dissolved. Team Biden has been smart enough to realize that the old center does not hold. He has endeavored to occupy some of Trump’s political terrain. Biden has made firm noises about China, for instance, even if his record in office suggests he has an alarming willingness to do Beijing’s bidding. He’s also promising to protect and create American jobs by tightening ‘Buy American’ laws.

Still, it seems highly unlikely that Biden’s trade policy, or his State Department, would be anywhere near as vigorous as Trump’s in tackling the aspects of globalization that most concern voters. There are already troubling signs that a Biden administration would be stocked with and surrounded by precisely the sort of corporate and foreign lobbyists that have so corrupted Washington. For instance, it recently emerged that the parent company of the Chinese social media company TikTok — the same company Secretary of State Mike Pompeo has suggested should be banned in America — has hired key Democratic operatives ahead of November. We wonder why.

After eight years as Obama’s vice president, Biden fancies himself a man of the world. No doubt his presidency would be far more internationalist in its outlook than Trump’s. That’s good news for the climate change lobby, the foreign-policy establishment and multilateral organizations such as the United Nations and the European Union. It may not be so welcome in the Heartland. It’s worth remembering that Joe Biden, reaching across the political aisle as he often has, was an enthusiastic supporter of the Iraq war. He also favored US intervention in Afghanistan and Kosovo. As something of a hothead even in his twilight years, he would be quick to rattle America’s saber at any foe, real or imaginary, that gripped his addled mind.

All political careers end in failure, said Enoch Powell, who was only 65 at the time. Biden will be 77 on Election Day. His geriatric charge at the presidency might prove that adage wrong. Then again, his might be the first presidency in recent decades to begin in disappointment. The last three one-term presidents were replaced by dynamic leaders with bold, reforming agendas: Hoover lost to Franklin D. Roosevelt; Carter to Reagan; George H.W. Bush to Bill Clinton. The leap from President Trump to President Biden would be far less invigorating. Trump, for all his flaws, offered America a different way ahead. Biden offers nothing new. After the tumult of the Trump presidency, Biden will not be a relief. His election will be the democratic equivalent of a giant shrug.