Edward VIII: Unlucky in love, or a Nazi-loving cad? 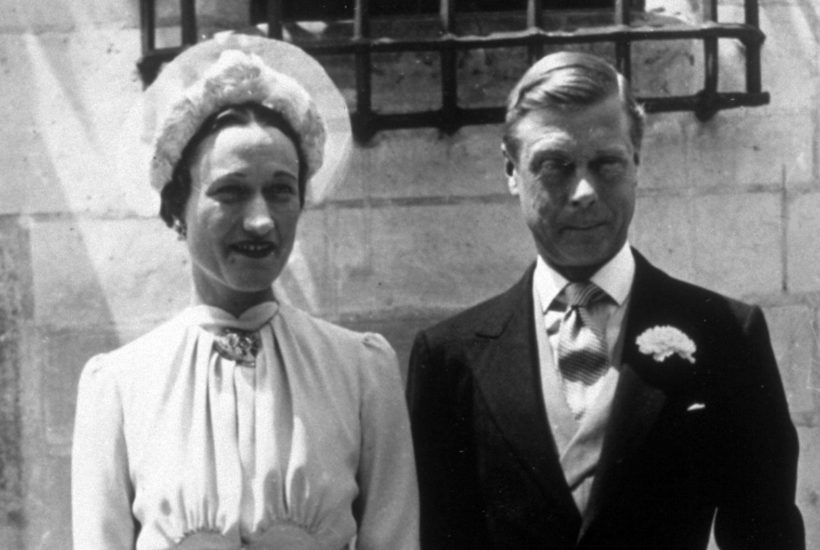 ‘After I am dead, the boy will ruin himself within 12 months,’ King George V groused in his last days about his oldest son and heir, David, Prince of Wales. Never a particularly cheery fellow, by 1935 George V was worn down by a lifetime of non-stop smoking. His gloom might have been understandable, but it wasn’t universal, since he had nothing but good things to say about his second son, the stuttering Bertie. In the prescience that kings sometimes display about their successors, George V suspected that he was about to pass the imperial crown into unsteady hands.

When the old king died in January of 1936, David, Prince of Wales became King Edward VIII. As Prince of Wales, he had been phenomenally popular, the House of Windsor’s first full-blown celebrity. He was young, clean-shaven, handsome, and blond. He was naturally high-spirited and a leader of fashion: Prince of Wales check is just one of Edward’s legacies to the modern male wardrobe. The public festivities he attended as his father’s representative made his face known throughout the world.

Edward could, when his mood was right, display an egalitarianism that generated newspaper headlines and warm sympathies wherever he went. He seemed not to stand on ceremony, but also seemed to recall the name of every single member of the British armed services he’d ever met. He laughed unaffectedly. He joked with bricklayers. He danced with shop girls. He was the living opposite of the stiff formality of his father, and he knew it: ‘I was, after all, the first King of the 20th century who had not spent at least half his life under the strict authority of Queen Victoria.’

He was, therefore, enormously well-traveled before his father’s death. He was also, to his father’s dismay, enormously well-romanced, with a preference for married women. At his louche household at Fort Belvedere in Windsor Great Park, the alcohol flowed, the ashtrays overflowed, and jazz played until sunrise. As the Prince’s latest paramours came and went, King George, placidly married to Queen Mary for decades, was increasingly horrified.

Ted Powell’s contention in Edward VIII: An American Life is that the splits between tradition and modernity, the common touch and noblesse oblige, ran right through the heart of the young man who had been Prince of Wales and was now king-emperor of the greatest empire the world had ever seen. ‘From 1918 onwards, in an effort to reconcile the demands of his princely duties with his desire for personal fulfillment, Edward developed two distinct personas,’ Powell writes. ‘They even had two different names … The public persona was the quintessentially British “Edward” the Prince (and later King); the private, genuine persona was the informal Americanized “David”.’ The organizing conceit of Powell’s book is that the American side of this Jekyll-and-Hyde arrangement was far stronger than previous biographers have perceived.

Edward had visited America during his globe-trotting tours as Prince of Wales. He had fallen in love with America’s music and slang. Edward was to complain about the ‘private war with the 20th century’ that his father had waged. The Americans fought no such war. They embraced the future, just as Edward hoped to do once he became king. ‘In the United States,’ Powell writes, ‘Edward was welcomed not so much as the heir of the King-Emperor, but rather as an international celebrity familiar from newsreels and the press.’

He was also welcomed by American women. Powell’s book abounds with the names of Edward’s momentary infatuations, but one American name inevitably stands out: Wallis Warfield, with whom the Prince eventually became utterly besotted: ‘His new love became an all-consuming passion, and he could not think of anything else.’

Wallis Warfield had married Lieutenant Winfield Spencer in 1916 and divorced him in 1927. Six months after her divorce, she married Ernest Simpson. When Edward first took up with her, she was only the latest in a long line of dalliances with married women. But the difference soon became obvious to everybody in Edward’s life. He had been dismissive of his previous mistresses, and they had often been dismissive of him; the dancer Virginia de Lanty had described Edward as ‘a miserable waltzer, who talked of polo ponies as if they were human beings.’ But Edward was completely dependent on Mrs. Simpson, and determined to marry her her when her second divorce was finalized.

He was also determined to make her his Queen. True, he would be Head of the Church of England, which did not accept divorce, and she would be the first royal spouse to have two former husbands still living. But, Powell contends, in Edward’s circles ‘divorce was relatively commonplace, and carried little social stigma.’ For Powell, this attitude reflected the ‘American’ view of marriage as ‘a social habit rather than a sacrament.’ If Powell has any evidence that Americans in the 1930s thought so little of divorce, he declines to share it.

The Abdication Crisis and its aftermath form the dramatic climax of Powell’s book. Powell recites this oft-told story in serviceable detail, and in a light favorable to Edward. The new king was set on marrying Simpson, and reigning alongside her. He was prepared to abdicate if he didn’t get his way. The Archbishop of Canterbury and the Court were against him, but Winston Churchill was for him, and so, in Powell’s telling, was the majority of the British public.

Edward never reached his own Coronation. His hapless brother Bertie became King George VI. Edward and Wallis were created the Duke and Duchess of Windsor. Expensive itinerants, they became embarrassments to the nation. If Powell’s organizing conceit were true, at this point in the story the Duke of Windsor, free at last from the constricting traditions of the Edward side of his nature, would embrace the David side and simply move to America. His own government encouraged it at one point, suggesting he could set himself up as a kind of Southern country squire. But, in a strangely anticlimactic sequel to Powell’s high romance, both David and Edward declined — to avoid paying American taxes.

The story of Edward’s American life stumbles rather abruptly to a halt, but not before one final scene that threatens to smudge Powell’s generally sympathetic image of Edward. In 1937, the Duke and Duchess of Windsor undertook a tour of Germany under the guidance of a man named Charles Bédaux who, Powell writes, ‘approached his contacts in Nazi Germany’ and arranged an itinerary that included meetings with Hitler and his top officials, all of whom appreciated Edward’s outspoken criticism of his own government.

Once war broke out, Edward’s German sympathies may have slid from a misplaced attempt to forestall another European war to treason. From the fraction of documentary evidence the British government didn’t destroy, a strong case can be made that the Germans approached Edward in the summer of 1940 with the prospect of being King again, and an equally strong implication that Edward was receptive. Certainly, he ignored orders to return to Britain in the summer of 1940, and speculated on the British pound while in contact with Nazi diplomats in neutral, and fascist Spain.

‘The events of June and July 1940 remain the most controversial of Edward’s life,’ Powell writes. ‘At best, he was defeatist about Britain’s prospects in the war; at worst he has been accused of collaborating with the Nazis, although the evidence is circumstantial.’

This is too generous. There are solid reasons to believe that Edward toyed with an offer of returning to power as a kind of royal gauleiter. One of his first duties would have been to oversee the arrest and maybe the execution of the brother who had taken his throne.

Powell puts America at the heart of Edward’s story, not merely as a cultural influence but as a personal motivation. ‘Whatever the short-term causes,’ Powell writes, ‘there can be no doubt that Edward’s personal Americanization from 1919 onwards created the preconditions for his Abdication, shaping his personal relationships, transforming his attitude to monarchy, and alienating him from the rest of the royal family.’ King Edward VIII: An American Life makes this argument smartly and passionately, but there’s an obvious alternate argument. Edward, and David too, may simply have been a pair of feckless, irresponsible and self-absorbed cads.