Unless you have been accused of a crime such as murder, taking legal action is like stepping in quicksand 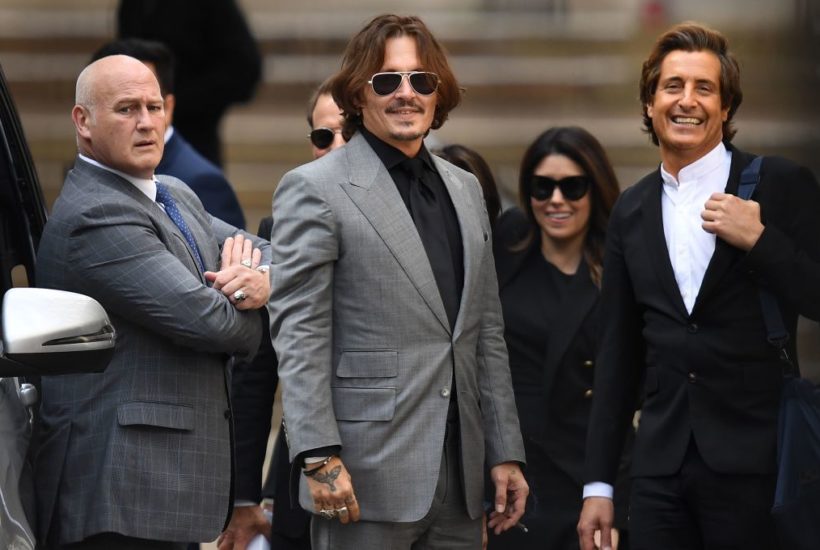 The case of Johnny Depp v. the Sun, heard over recent weeks at the High Court in London, certainly gives fresh life to the old warnings about dirty linen and its public laundering. Whatever the results, I would be surprised if it didn’t provoke others to think again about the wisdom of reverting to the law. The influencers formerly known as the Sussexes, for instance, must be wondering whether their forthcoming legal case will result in them solely being showered with praise.

Of course one has sympathy for famous people who feel that they have been badly portrayed. It is unpleasant to read nasty things about yourself in the newspapers. Especially if you have spent years reading largely pleasant things, carefully placed there by yourself or your PR team. Still, the urge should be resisted, and almost all precedent — even before the Depp trial — shows why.

Unless you have been falsely accused of a crime such as murder, taking legal action is always like stepping in quicksand. The absence of this realization is one reason why the young and unworldly imagine that the courts are a good place to settle their complaints. The misunderstanding comes from lack of experience, lack of knowledge of how much can go wrong and zero understanding of the fact that even exoneration leaves some residue of the thing of which you were accused.

Earlier this decade, during one of their frequent leadership contests, a man called John Rees-Evans stood to be that week’s Ukip leader. Several years before, he had made a joke about a gay donkey trying to rape his horse. The joke was not golden, and the candidate apologized when it resurfaced.

Yet he could not shake it from his person. Headline writers consistently scorned the opportunity to describe his policies, foreign or domestic. Instead, he was only ever introduced with a Scrabble entry variously involving the words ‘gay’, ‘rape’, ‘man’, ‘donkey’, ‘horse’ and ‘Ukip’. As word-slates go, the one associated with him was particularly suboptimal.

Of course Rees-Evans could have sued. But had he done so, the words most associated with his name would not have been magically disassociated from it. More likely, it would have embedded the existing word association. This is a version of the conundrum that must run through every would-be plaintiff’s head.

Our own time brings an added complexity. Which is that, while being erroneously accused of rape or murder allows you to prove your innocence, the most damaging things of which a person can be accused today can in most cases be neither proved nor disproved.

Consider the most damaging contemporary charge of all: that of racism. When it comes to this allegation, there is no agreed-upon definition, no definitive means for it to be disproved and no punishment for its false leveling. Many cultural oddities of our time can be traced back to this curious, yet rarely reflected-upon fact.

I recently got a little reminder of this when a lecturer in postcolonial literature at Cambridge University called Priyamvada Gopal tweeted out the phrase ‘White lives don’t matter’. A number of people were unthrilled by this statement and made their views known. Naturally Gopal immediately went about accusing all her critics — including me — of being racists. She then spent her weekend firing out late-night threats claiming that lawyers’ letters would imminently be wending their way in my direction as towards all her other detractors.

At this point Twitter promptly revealed even more unpleasant tweets sent out by Gopal over recent years. These included her claim last year that she struggles ‘every day’ to resist her urges ‘to knee-cap white men’. In the wake of this controversy, Gopal strangely made her Twitter account ‘protected’ so that no unapproved people could read her ravings. And Cambridge promoted her to a full professorship.

To date I have still received no communication from Prof Gopal’s lawyers. And I suspect that this is for the same reason that her pigeonhole has remained unbothered by any communications from mine.

For while I presume that both Prof Gopal and I could try to sue each other, it would be in neither party’s interests to do so. If she wished to try to prove that my distaste for her style of communication is based solely, and knowingly, on a dislike of her racial origin then I suppose she would have to prove that there is no other reason to criticize her. And if I chose to argue in court that I was a victim of racial discrimination at the hands of Prof Gopal then I suppose I would have to rely on getting a jury subtle enough to recognize that a victim of racism might be a white writer as much as it might be a non-white academic.

None of this personally bothers me overmuch, because I still have the opportunity to explain myself in public and say what I actually think to the best of my ability. What does worry me is the fact that most people can have no hope of such recourse.

Now that the bookshops have re-opened I have wandered around a couple, depressed to see them piled high almost exclusively with books scolding customers for their alleged racism. I can think of a fair few things I would like to say about this. But what would I dare say if I was just a customer rather than a customer and an author with outlets? The words ‘bookshop’, ‘rant’ and ‘racist’ are just waiting to be used against anybody who makes any criticism of this latest hectoring.

And, once attached, there would be no way to remove the stain. The public would not care. Employers would be unlikely to stand by the accused. And if anyone even dreamed of going to the law, they would have to raise vast sums of money to try to disprove something that would ignite a headline salad to make John Rees-Evans’s one look enviable.

I don’t know what the way out of this societal conundrum is. Lawyers tell me that it requires innocent plaintiffs to make case law. Which is all very well. But the problem with legal precedents is always the same: who would want to be the one to make them?