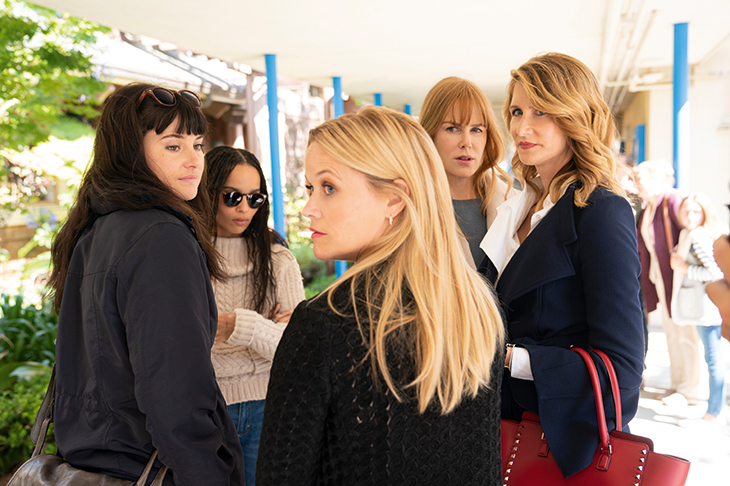 Six hundred and thirty years ago, Chaucer revealed in ‘The Wife of Bath’s Tale’ that what women really want is to be totally in charge of everything. With my daughter now back home permanently having done her exams, I can confirm that this is true: no longer am I in control of what we watch on TV, not even when I plead that it’s my job and how else am I going to be able to afford the extensive tour of Magaluf and Bali etc. that she’s got planned this summer?

But I don’t mind really because it means I’m forced to watch stuff there’s no way I would have seen otherwise. And in doing so I become a better and wiser person because of all the fascinating things it teaches me about the female psychopathology.

Big Little Lies (HBO), for example. This is the latest project of David E. Kelley, the prolific and hugely successful screenwriter with a rare knack for getting inside women’s heads, as he demonstrated with Ally McBeal. Feminists hated Ally McBeal because of its outrageous suggestion that given half the chance women don’t want to be hard-nosed bitches competing violently with men in the workplace, but are naturally just kooky fantasists who dream about finding Mr Right and then having lovely cute dancing babies. Normal women loved it.

I would have expected similar criticisms to have been made of Big Little Lies, which is patently a massive exercise in very cynically targeted girl pornography. Hunky blokes with ripped torsos and loads of money; mega-expensive modern houses with stripped hardwood floors, picture windows and views over Monterey Bay; tension and one-upmanship on the school run; haircuts; yoga; accessories; fancy kitchens; infidelity — all spiced with lashings of parental guilt, rape menace, suspicion, intrigue and murder. If you had to devise a female clickbait equivalent of the Bastogne episode of Band of Brothers, Big Little Lies would come pretty close to the mark.

This time, though, Kelley has outfoxed the feministas by gulling the deluded poppets into imagining they are watching a critique of ‘toxic masculinity’. The first season — major plot spoiler coming — concerned a seemingly perfect husband who was in fact an evil rapist. Together the photogenic womenfolk of Otter Bay conspired in the final episode to give him his just deserts by pushing him down some stairs to his death.

Probably, the series was meant to end there. But it proved so popular that Kelley has created a sequel. This time, the baddie whose looming menace hovers over paradise is the rapist’s mother Mary-Louise, played by Meryl Streep. Ostensibly, she has moved into the area to spend more time bonding with her late son’s children. Clearly, though, she has suspicions that her darling boy did not die of natural causes.

Mary-Louise is quite possibly the most terrifying passive-aggressive monster since the one played by Kathy Bates in Stephen King’s Misery. She looks so nice, mumsy, elegantly distrait in the northern Californian way. But then she comes up with stuff like, to Reese Witherspoon’s character Madeline: ‘You’re very short. I don’t mean it in a negative way… Maybe I do. I just find little people to be untrustworthy.’

Better still is the scene at the dinner table with her daughter-in-law Celeste (Nicole Kidman — as you see, the cast is stellar) and her grandsons, where she suddenly chooses to pour out her grief in a terrible keening wail of unhinged loss. ‘Oh my God,’ you realize with a delicious frisson of anticipation. ‘She’s even more bonkers and dangerous than her rapist son!’ Girls, it goes without saying, will love this series. Boys: there’s more than enough eye candy and drama for you to earn your brownie points by sitting through it companionably without hardly once having to check what’s happening on Twitter.