The false equivalence of Islamophobia and anti-Semitism

In America and Britain, one of the worst tropes of our time gains ground 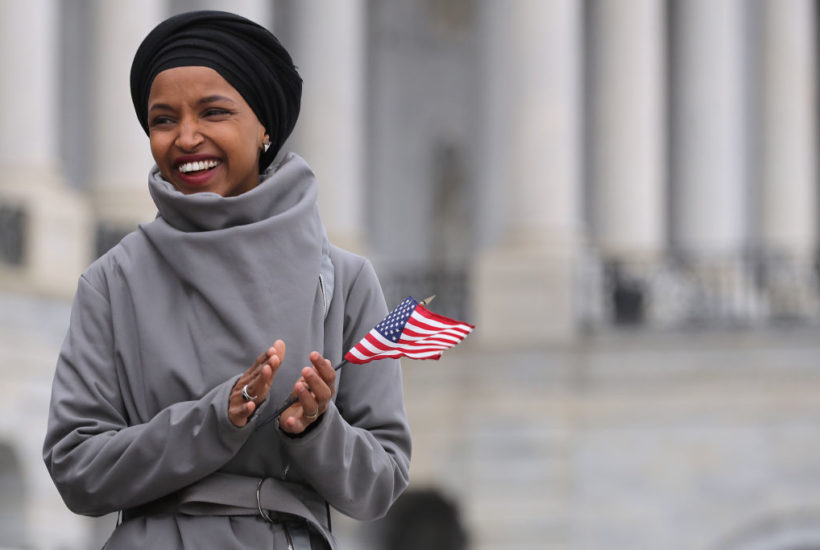 I have been traveling in the Middle East for the last few weeks and slightly regret returning to the maelstrom of ancient animosities and unbridgeable sectarianism that is modern Britain. But in my absence I see that one of the worst tropes of our time has been stalking unhindered across the land. That is, of course, the latest push to make an equivalence between anti-Semitism and the crock term ‘Islamophobia’.

It is not just in the UK that this play has been made. In America over recent days people have been able to follow the progress of the new Muslim Congresswoman Ilhan Omar who has decided to deflect attention from her weekly expressions of anti-Semitism by claiming ‘Islamophobia’. Where this would once have been a fringe play, this time it has been adopted by the Democratic party itself. So we are no longer talking about a harmless misunderstanding here. This is an equivalence that has developed legs.

In the UK it appears to have been embedded not only by anti-Semites in the Labour party who want to cover their tracks, but by the Conservative party and a range of others who ought to know better. It has been reported that the Conservative party has recently suspended a number of people who have said ugly and unpleasant things about Muslims on social media. Clearly where people have called for violence against any group of people then such people have no place in a political party. But this shaving of a dozen people from the Conservative ranks has been described as a cleansing of ‘Islamophobia’ from the party. Even Jacob Rees-Mogg has been happy to embed the idea that this is what has happened. And so the false equivalence gets embedded. The idea that just as there should be no place in the Labour party for anti-Semitism so there should be no place in the Conservative party for ‘Islamophobia’. One can only speculate over who might benefit from the falsehood that these are equal and equivalent problems.

If I had a pound for every time I have had to make the point I am about to make I could well become as rich as Jeremy Corbyn. But here we go again: anti-Semitism is hatred or suspicion of Jews because they are Jews. It is an irrational prejudice built on centuries of stereotypes and hatreds which culminated in the worst crime in human history, on our continent, in the last century. ‘Islamophobia’, by contrast, is a term which can claim almost anything that the wielder claims it to mean. So in many peoples’ eyes, it is ‘Islamophobic’ to ever say anything negative about any aspect of Islam or any action carried out by any Muslim in the name of their faith. Among much else, those who wield the term hope that they can present the situation of Muslims in modern Europe as so dire that they have pretty much already suffered an equal amount to the Jews of Europe in the 20th century. Islamists, their sympathizers and useful idiots appear to be hoping that if they can point to some mean things said on social media then in time they can present this as indistinguishable from the organized murder, in living memory, of six million Jews.

There are people who complain that I am splitting hairs or being needlessly pedantic when I make this point. But the trouble is that if you build an idea based on a falsehood then you merely delay a problem you will have to deal with at some point. Let me give one very current example. In recent days footage has emerged of a protest by parents at a predominantly Muslim school in Birmingham who have organized protests against any teaching of matters to do with gays to their children. A video of the protest can be seen here. Since this came out social media has been filled with people from across the political spectrum making sure that they register their necessary – and comfortable – condemnation of this. And they have some help in this play of theirs. Because of course it is not as though Islam is the only faith which has problems with homosexuality. So one of the safe ways to object to the Birmingham schools protest is to stress that we must all oppose homophobia wherever it comes from, be it from Christians, Muslims or anybody else. Phew, obstacle in the road successfully dodged, eh?

Except that I would say not. For all things are not always and for all time the same. Nor do they always fall out in exactly the same way. The Christian churches managed to alter their teachings about homosexuality through by a very long and slow adoption of aspects of the rights culture that had been adopted in wider society. It is not the case with the church everywhere, by any means. But in the West in general, in order to fit in to the prevailing culture the protestant churches have broadly altered their views, and even the Church of Rome has made noises under the present pontiff which suggest a softening of attitudes. There are all sorts of ways in which this can be achieved. But Christianity has a number of advantages here. Most noticeable is the fact that the Jesus of the Bible had nothing whatsoever to say about homosexuality, and since his general message would appear to have been one of love, kindness and forgiveness, modern Christians have found it fairly easy to present the Jesus of the Bible – rightly or wrongly – as a rather ‘live and let live’ figure when it comes to homosexuality as with almost everything else. A sort of Liberal Democrat in sandals.  Or a Liberal Democrat.

Sad to say, it is simply harder to make this case when it comes to the central figure in Islam. This is not to say that individual Muslims may not be able to reconcile themselves to homosexuality or indeed to be gay and Muslim themselves. But it’s definitely all a much harder proposition. If Jesus had been quoted – as Muhammad is in the hadith (sayings) – as saying that two men found in the act of bum fun should be killed then Christians everywhere would have a much harder time with the pro-gay argument. Every time some nice vicar said ‘But shouldn’t we love our fellow man’ someone else would say, ‘But did our Lord not command that the person doing the act and the person it is being done to should both be killed?’ Might there then not be a lot of beard-stroking, and an awkward concern that the scriptures weren’t wholly on the side of the gays? Again, this isn’t to say that Islam has to be at all times immutable and unchangeable in the way in which it is understood and enacted. But it is to point out that it might not be enough just to talk about ‘condemning homophobia wherever it comes from’. Or to put it another way, such a response is not just callow, but really shamefully shallow.

And this is where we return to the problem which I started with. Which is how you could have anything more than a shallow and cowardly debate about this without finding yourself condemned for ‘Islamophobia’? It is difficult, isn’t it? Because the modern multi-culti get-out is that everything – including every religion – basically comes out the same in the wash, and that if we just unite against ‘all forms of bigotry’ that wash will bring us to some equitable nirvana.

As has often been said, ‘Islamophobia’ is a word created by fascists and used by cowards to manipulate morons. As it happens, we have plenty of religiously inclined fascists in Britain (as in America), including a number now in positions of legislative power from across the parties. We also have a whole plethora of cowards, from left and right, willing to dodge any problem and audibly sigh with relief as they imagine that having dodged the problem they will no longer have to encounter it again. But the one positive thing is that there are fewer morons than the fascists and cowards would wish. The general public are not morons. And we can find things out for ourselves. We have access to information. And so it would seem that in the matter of ‘Islamophobia’, as with a range of other matters, it is the people who are expected to be morons who will have to continue to correct the people who aspire to lead us.