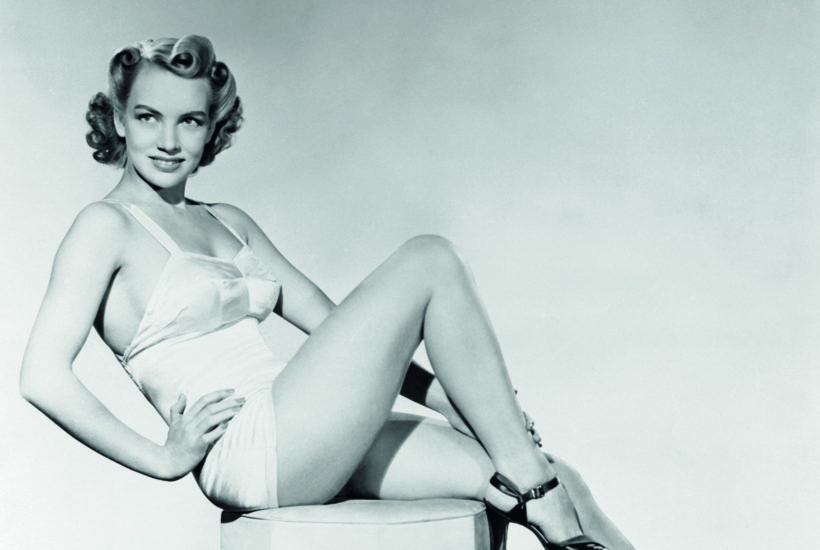 To die for: Broadway showgirl Ann Eden in 1938, before her marriage to Billy Woodward

Life magazine called it the Shooting of the Century. And you can see why. It had everything: sex, money, class, royalty and murder. And it all took place in Oyster Bay on Long Island, only a few miles from the scene of the greatest fictional shooting of the century — the murder of Jay Gatsby on the North Shore.

What’s more, two of the finest writers — and Olympic-level gossips — of the 20th century, Truman Capote and Dominick Dunne, took the 1955 murder of William ‘Billy’ Woodward Jr and turned it into the ultimate in jaw-droppingly scandalous novels.

Billy Woodward was born just over 100 years ago, on June 12, 1920, into a life of spectacular wealth and privilege. And then his wicked, upwardly mobile wife came on the scene to destroy it all.

All the good fairies were gathered together at Billy’s birth. Slim, tall and good-looking, he was the only son and heir of blue-blooded William Woodward Sr, president of the Hanover National Bank, friend of Edward VII and owner of the Belair estate in Maryland, one of the finest stud farms in the country. His mother, Elsie Cryder, was a society beauty, one of the Cryder triplets, hailed along with her two sisters as ‘the apples of New York’s eye’ by the Manhattan press. They lived in a Gatsbyesque mansion at 9 East 86th Street, a French Renaissance palace later bought by hedge-fund billionaire John Paulson.

To begin with, Billy Woodward followed the good little rich boy’s predestined career path to the letter: Groton, Harvard and a Purple Heart in World War II when his ship was torpedoed. He duly became a director of the family bank and started to breed the family’s fine horses. But then he fell for Ann Eden Crowell.

She looked the real deal: little button nose, million-dollar smile and the cutest blond ringlets. But she wasn’t quite what the Woodward family had envisaged for their golden boy. In The Two Mrs Grenvilles, Dominick Dunne’s delicious, wicked retelling of the story, she was distinctly from the wrong side of the tracks. Billy’s marvelously snobbish mother condemns her by saying, ‘She pronounces the “t” in “often”.’

Born Angeline Lucille Crowell, she was a model and showgirl in Manhattan before she met Billy. She was a good-time girl, too. The gossip goes that she had an affair with William Woodward Sr before he introduced her to his son. As Dunne has it in his novel, ‘He’s got the class and she’s got the brass.’

In Dunne’s version of events, Ann was electric in the sack, too — an eye-opening revelation to naive young Billy. After her first date with Billy, he relates, ‘She wished she hadn’t sat on his face on the first date.’

Thanks to her well-honed feminine wiles, Ann became, in Dunne’s retelling, the first ‘Cinderella girl’ (a woman of humble origins) to break into the highest brackets of New York society. In real life, she married Billy in 1943 and had two sons, William ‘Woody’ III and James.

All too soon, the marriage started to sour, undermined by the couple’s affairs, boozing and drugs — and Ann’s overpowering social ambition. In Dunne’s version, she was dreadful to the servants, who were ‘stung by her suspicions and imperious tones’ — an allegation that has, incidentally, been laid at Meghan Markle’s door. Dunne says of Ann: ‘Her social ambition was too apparent for [Billy]. She did not give parties to enjoy herself but to advance herself.’

Ann Woodward, however, had no intention of letting the marriage fall apart. She was desperate to avoid what Dunne calls ‘becoming a former wife with a great last name’. Billy, though, was equally desperate to escape being trapped with her and becoming ‘one of those fourth-generation blank-faced men with sad eyes who laugh all the time’. A divorce looked inevitable.

And so the wheel of bad fortune inched inexorably toward the fatal night of October 30, 1955. That evening, the Woodwards left their Oyster Bay home for a neighbor’s dinner, held in honor of the Duchess of Windsor. It was the sort of high-end evening that would normally have thrilled Ann, the social mountaineer.

But that night, if Truman Capote is to be believed in his version of events, Ann had her mind on other things than sucking up to a duchess: she had become a cold-blooded murderess, determined to kill her husband because he’d asked for a divorce and was having an affair. ‘Bang-Bang’, as Capote nicknamed her, would inherit all his loot — as long as she cooked up the perfect murder.

There had been recent reports of a burglar on Long Island (and a burglar who was about to break into the house before the shooting was indeed later arrested). So that night both the Woodwards retired to their separate bedrooms, each with a loaded shotgun for company.

According to Ann’s story, in the middle of the night, she left her bedroom to be confronted by someone in the darkness outside her husband’s bedroom door. Most people would think that someone was their husband but — like Oscar Pistorius, the South African sprinter who murdered his girlfriend Reeva Steenkamp in his Pretoria home in 2013 — Ann claimed she thought it was a burglar.

Her shot in the dark killed Billy instantly. By the time the police turned up, she was cradling his body in tears, claiming she had thought he was a prowler.

But, unlike Pistorius, Ann got away with it. Her mother-in-law, Elsie Woodward, didn’t believe a word of her story — but also didn’t want her grandchildren’s lives to be further destroyed by having their mother in jail. And so she gave Ann her full support and Ann was freed after a grand jury decided, astonishingly, that there had been no crime. She went on living in splendid style with her two sons, perfecting the aphorisms of the Upper East Side well-born. ‘I only go to the West Side on my way to Europe,’ she says at one point in Dunne’s story.

This gripping, tragic, deathly tale didn’t stop there, though. The aftereffects of the Shooting of the Century ricocheted well into its second half.

First, in 1975, Truman Capote set about publishing chapters of his book Answered Prayers in Esquire, including the tale of Ann’s murder of her husband. When she heard about the impending publication, Ann, who had thought the 20-year-old scandal had finally faded, promptly downed a cyanide pill and died. On hearing the news, her mother- in-law declared, ‘Well, that’s that. She shot my son, and Truman just murdered her, and so now I suppose we don’t have to worry about that anymore.’ And so Elsie revealed what everyone suspected she’d always thought — that Ann’s murder defense was a pile of baloney.

The deaths just kept on coming. In 1978, the Woodwards’ younger son, Jimmy, killed himself by jumping off the ninth floor of a building. Twenty years later, his brother, Woody, killed himself, too. Both boys, then aged eight and 11, had been in the Oyster Bay house on the night their mother killed their father.

And then, in 1985, Dunne fictionalized the story in his bestseller, crammed with those wonderfully salacious anecdotes about Ann’s sexual techniques, the snobbery of the Woodwards towards her and her rudeness to her staff.

Strangely, Dunne’s masterly book has disappeared into the mists of time. But it is still appreciated by a few obsessive devotees. I’m one of them, as is Nicholas Coleridge, the former chairman of Condé Nast Britain. Coleridge says of the book: ‘I savor every paragraph, every word of this brilliant social novel. Navy ensign Billy Grenville, heir to a vast New York fortune, spots a showgirl on the dance floor and it is love at first sight, much to the horror of the family matriarch. They marry, but it all ends very, very badly.’

How tragic — but also how much more enticing a read than a book about a couple who live happily ever after. If you’re searching for utterly compulsive holiday reading on the first beach you’re allowed to lie on this summer, look no further.

Harry Mount is editor of the Oldie magazine. This article is in The Spectator’s July 2020 US edition. Subscribe here to get yours.