Any other business Life Trade

Is the Fed caving to the demands of the market?

Distant thunder rumbles when ‘recession’ creeps back into America’s vocabulary 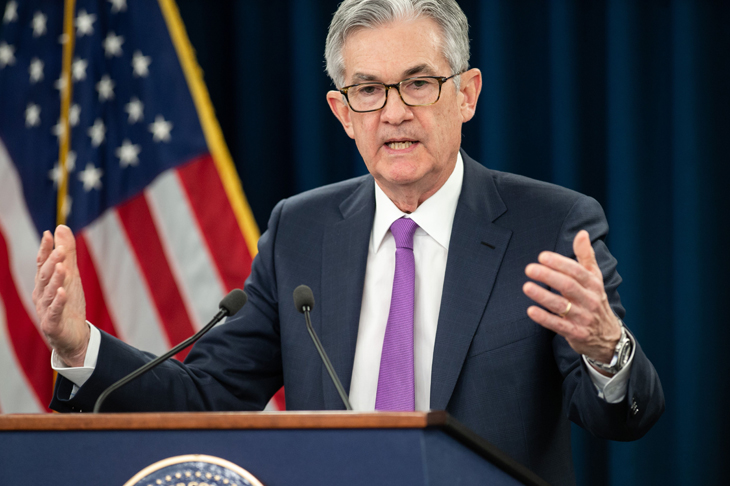 Has ‘Jay’ Powell gone wobbly, or does he know something we don’t? That was the question being asked after the US Federal Reserve, of which Powell is chairman, kept dollar interest rates on hold last week — rather than continuing to notch them upwards as it has been doing for two years — and hinted that the next move might actually be downwards.

Trade tension with China, the impact of Donald Trump’s government shutdown and the risk of a no-deal Brexit were all cited as ‘cross-currents’ affecting the decision, but pundits led by Wall Street ‘bond king’ Jeffrey Gundlach declared the Fed to be ‘caving in’ to the demands of the stock market and the President. Trump had been tweeting against Powell, the respected financier he appointed to the central bank chair a year ago, warning him not to make ‘yet another mistake’ with a rate rise based on ‘meaningless numbers’ (presumably that’s economic data) rather than market sentiment, which perpetually favors cheap money.

More noteworthy, perhaps, are the comments of Jim Cramer on CNBC’s Mad Money television show. ‘The only thing Powell caved to is reality,’ Cramer declared. Continuing rate rises close to a turning point in the cycle would have brought ‘a lot more devastation to Main Street than to Wall Street… He didn’t want to be the guy who ended the expansion. He didn’t want to be the reason we went into a recession.’

When Italy was announced to have fallen into recession in the last quarter of 2018, the international response was largely: ‘Oh well, that’s Italy for you: so what?’ But when ‘recession’ creeps back into America’s vocabulary and the Fed executes a sudden U-turn, there’s a rumble of distant thunder.

Year of the Pig

Happy Chinese New Year, or at least let’s hope so. The chubby pig of 2019 is an obvious symbol of wealth; but being both pragmatists and optimists where money is concerned, the Chinese easily find reasons to associate all 12 of their zodiac creatures, (including 2018’s dog) with rising prosperity. This year, however, the amount spent by their shoppers and tourists during the New Year festivities will be compared against last year’s figure of $190 billion for signs of a weakening economy.

We already know that trade tensions with the US and other negative factors have been afflicting Chinese sales of western imports, from iPhones to Land Rovers, and that property and shares have been afflicted too, with the Shanghai stock market down by half from its 2015 peak. Official Chinese statistics are always to be treated with suspicion, but this week’s spending on (genuine) Rolex watches and Louis Vuitton handbags in airport duty-free shops, on gold jewelry in Hong Kong and on the casino tables of Macau, will be a real indicator of the seriousness of China’s downturn.