We desperately need new scripts, new stories that will provide a realistic, non-catastrophic sense of where we should be going 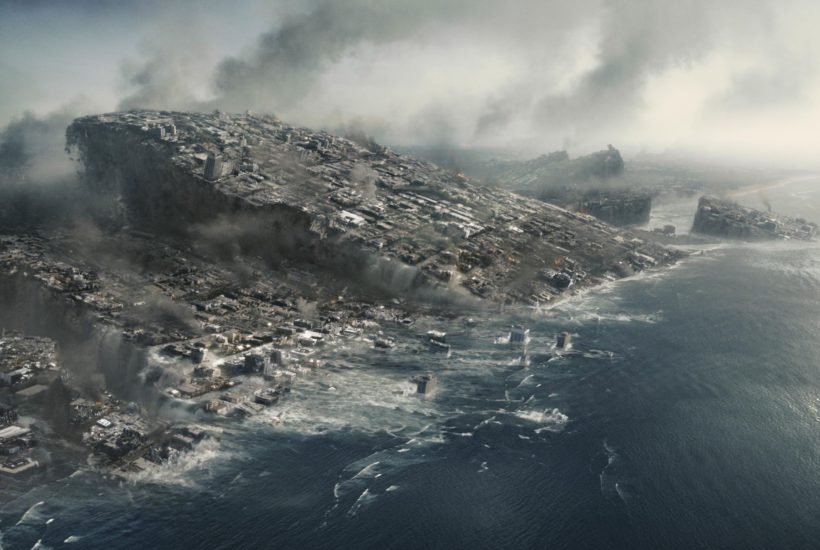 We often hear that what we are going through is a real life case of what we used to see in Hollywood dystopias. So what kind of movie are we now watching?

When I got the message from many American friends that gun stores sold out their stock even faster than pharmacies, I tried to imagine the reasoning of the buyers: they probably imagined themselves as a group of people safely isolated in their well-stocked house and defending it with guns against a hungry infected mob, like the movies about the attack of the living dead. (You can also imagine a less chaotic version of this scenario: elites will survive in their secluded areas, as in Roland Emmerich’s 2012 where a couple of thousand selected survive — with the admission price of $1 billion per person.)

Another scenario along the same catastrophic lines came to my mind when I read the following news headline: ‘Death penalty states urged to release stockpiled drugs for COVID-19 patients‘. ‘Top health experts sign letter saying badly needed medications used in lethal injections “could save the lives of hundreds”‘, read the standfirst. I immediately understood that the point is to ease the pain of the patients, not to kill them; but for a split of a second, I recall the dystopian Soylent Green (1973), which takes place in a post-apocalyptic overpopulated earth, where old citizens, disgusted with life in such a degraded world, are given the choice to ‘return to the home of God’: in a government clinic, where they take a comfortable seat and, while watching scenes from pristine nature, they are gradually and painlessly put to sleep. When some conservatives proposed that the lives of those over-70 should be sacrificed in order to get the economy running and save the American way of life, would the option staged in the film not be a ‘human’ way to do it?

But we are not yet there. When coronavirus began to spread, the predominant idea was that it is a brief nightmare which will pass with the weather getting warmer in the spring — the movie rerun here was that of a short attack (earthquake, tornado etc.) whose function is to make us appreciate in what a nice society we live. (A subspecies of this version is the story of scientists saving humanity at the last minute by inventing the successful cure or vaccine against a contagion — the secret hope of most of us today.)

Now that we are forced to admit the epidemics will stay with us for some time, and will profoundly change our entire life, another movie scenario is emerging: a utopia masked as dystopia. Recall Kevin Costner’s The Postman, a post-apocalyptic mega-flop from 1997, set in 2013, 15 years after an unspecified apocalyptic event left a huge impact on human civilization and erased most technology. It follows the story of an unnamed nomadic drifter who stumbles across the uniform of an old United States postal service mail carrier and starts to distribute post between scattered villages, pretending to act on behalf of the ‘Restored United States of America’; others begin to imitate him and, gradually, through this game, the basic institutional network of the United States emerges again. The utopia that arises after the zero-point of apocalyptic destruction is the same United States we have now, just purified of its postmodern excesses — a modest society in which the basic values of our life are fully reasserted.

All these scenarios miss the really strange thing about the coronavirus epidemic, its non-apocalyptic character. It is neither an apocalypse in the usual sense of the utter destruction of our world, and even less an apocalypse in the original sense of the revelation of some hitherto concealed truth. Yes, our world is falling apart, but this process of falling-apart just drags on with no ending in sight. When the numbers of infected and dead rise, our media speculate how far from the peak are we — are we already there, will it be in one or two weeks? We all eagerly attend the peak of the epidemic, as if this peak will be followed by a gradual return to normality, but the crisis just drags on. Maybe, we should gather the courage and accept that we will remain in a viral world threatened by epidemics and environmental disturbances. Maybe, even if the vaccine against the virus will be discovered, we will continue to live under the threat of another epidemic or ecological catastrophe. We are now awakening from the dream that the epidemic will evaporate in the summer heat. There is no clear long-term exit plan. The only debate is how to gradually weaken the lockdown measures. When eventually the epidemic recedes, we will be too exhausted to take pleasure in it. What scenario does this imply? The following lines appeared at the beginning of April in a major British daily, outlining a possible story:

‘Radical reforms — reversing the prevailing policy direction of the last four decades — will need to be put on the table. Governments will have to accept a more active role in the economy. They must see public services as investments rather than liabilities, and look for ways to make labor markets less insecure. Redistribution will again be on the agenda; the privileges of the elderly and wealthy in question. Policies until recently considered eccentric, such as basic income and wealth taxes, will have to be in the mix.’

Is this a rehash of the British Labour manifesto? No, it’s a passage from an editorial in the Financial Times. Along the same lines, Bill Gates calls for a ‘global approach’ to fighting the disease and warns that, if the virus is left to spread through developing nations unhindered, it will rebound and hit richer nations in subsequent waves:

‘Even if wealthy nations succeed in slowing the disease over the next few months, COVID-19 could return if the pandemic remains severe enough elsewhere. It is likely only a matter of time before one part of the planet re-infects another…I’m a big believer in capitalism — but some markets simply don’t function properly in a pandemic, and the market for life-saving supplies is an obvious example.’

Welcome as they are, these predictions and proposals are all too modest: much more will be demanded. At a certain basic level, we should simply bypass the logic of profitability and begin to think in terms of the ability of a society to mobilize its resources in order to continue to function. We have enough resources, the task is to allocate them directly, outside the market logic. Healthcare, global ecology, food production and distribution, water and electricity supply, the smooth functioning of the internet and phone — this should remain, all other things are secondary.

What this implies is also the duty and the right of a state to mobilize individuals. They have a problem now (not only) in France. It’s the time of harvesting spring vegetables and fruits, and usually thousands of seasonal workers come from Spain and other countries to do the job. But since now borders are closed, who will do it? France is already looking for volunteers to replace foreign workers, but what if there aren’t enough? Food is needed, so what if direct mobilization will be the only way?

As Alenka Zupancic put it in a simple and clear way, if reacting to the pandemic in full solidarity can cause greater damage than the pandemic itself, is this not an indication that there is something terribly wrong with a society and economy which cannot sustain such solidarity? Why should there be a choice between solidarity and economy? Should our answer to this alternative not be the same as: ‘Coffee or tea? Yes, please!’ It doesn’t matter how we’ll call the new order we need, communism or co-immunism, as Peter Sloterdijk does (a collectively organized immunity from viral attacks), the point is the same.

This reality will not follow any of the already imagined movie scripts, but we desperately need new scripts, new stories that will provide a kind of cognitive mapping, a realistic and at the same time non-catastrophic sense of where we should be going. We need a horizon of hope; we need a new, post-pandemic Hollywood.