Elizabeth Warren’s reparations for the rich 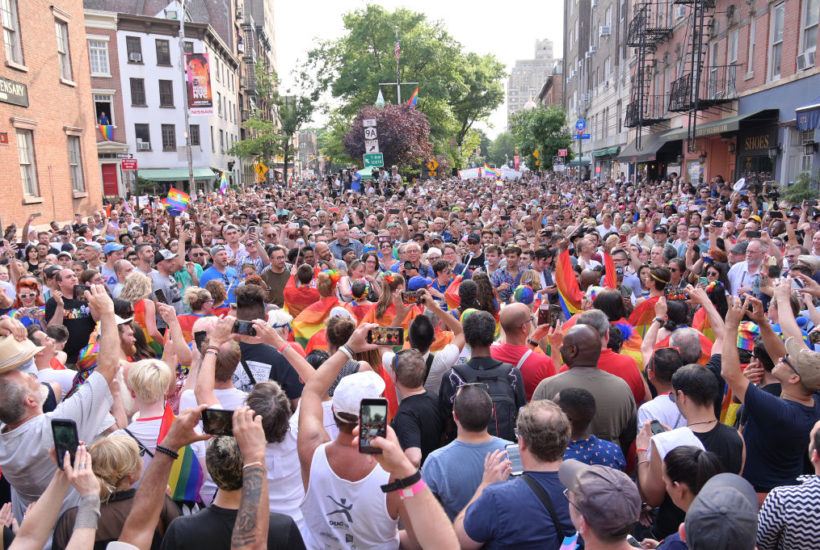 Shortly after attending one of our Pride pow-wows, where she wore the traditional homosexual garb of a rainbow feather boa, socialist tribal elder Elizabeth Warren had a vision.

The ancient gay spirits of 2013 visited Warren as she performed the sacred dance of Shakes Like An Idiot, and delivered a message of how she can save the homosexual people: retroactive gay tax refunds. Even the shadowy LGBTQ Military-Industrial Complex, whose tentacles probe every crevice of society for nuggets of oppression, hadn’t thought of this one before. For the most part, they still aren’t thinking of it.

Warren might not be the hero we want, but she’s also the one no one asked for. Her plan, originally introduced in 2017 and called the Refund Equality Act, calls for federal tax rebates for gay married couples who filed jointly in states before gay marriage was legalized. The tab, according to her, comes to $57 million.

If that’s her argument, Obama should just cut the check himself, since it’s his fault it took so long. Warren is a lawyer pretending to not understand why our tax laws, like our criminal laws, aren’t retroactive. But the irony here is that gay couples are already rich. They vastly out-earn their straight counterparts. So here’s Warren, from the party of envy and theft, arguing that middle-class and poor people need to give free money to rich people.

The New York Times, an online message board based in Manhattan dedicated to the gripes of the wealthy, allowed a Bard College professor, who must be really smart and oppressed, to pen an op-ed detailing a three-step process for gay reparations. It includes the Orwellian demands for ‘moral rehabilitation’, ‘truth-telling’, and, finally, of course, forking over some cash. Get real.

If gays ever did get reparations, they’d just blow all the money on meth and Britney Spears tickets. Kind of like when black reparations come, Cadillac will sell out of Escalades and then, well, that’ll be that.

During the gay marriage fight, I was thoroughly entrenched in left-wing media and the gay agenda. I saw the bullshit all around me. I once wrote a magazine piece about the transgender capital of New York, a neighborhood in Queens that’s hosed down in crossdressers — a sort of Tranny Central Station. The population is almost entirely Hispanic illegals and they all have HIV. I asked an elderly Mexican tranny, who is a kind of godmother to all the working gals there, why it seemed there was a disproportionately high number of black and hispanic trannies in the LGBT community compared to whites.

‘Because these girls come from really macho cultures where the worst thing you can be is gay. So they become women instead, because that’s seen as better,’ she told me.

I did another piece about a crossdressing academy in New York, founded in the 1990s before the word ‘transgender’ existed. It’s a place exclusively for heterosexual men with a kink for dressing up as women. I met some of these guys, and they were nice enough despite being deranged perverts. Nothing turned them on more than seeing themselves dressed as women, going out in public and doing lady things. Being a sasquatch in a sundress shopping for nylons and having tea at the Plaza gave them massive hard-ons, they told me.

Clinically, they’re known as autogynephiles. The proprietress of that school, a straight woman who’d spent her life around these men, told me they are the ‘inconvenient truth’ of the trans movement. Since Big T muscled its way into the political arena, she told me, plenty of these men are now convinced they’re actually women.

Gay people lie about everything. Trans is the biggest one right now, and it’s coming back to bite. When it comes to gays, America has learned that if you give these people an inch, they’re going to demand nine-and-a-half. The poor, innocent, sweet little gays who looked at us with dewy eyes and pleaded, ‘Please, America, we just want to love who we love,’ are now toppling skyscrapers with lasers firing from their eyes, bellowing ‘GIVE US YOUR CHILDREN AND BAKE THE FUCKING CAKE.’

Let gay marriage be a cautionary tale in dealing with these barbarians. The gays didn’t want love and acceptance, we now know. They wanted vengeance. When Warren calls gay marriage a human right, her rhetoric does damage. It’s not a human right, no one thinks it is, and neither is real marriage. Real marriage is a sacrament before God. Gay marriage is just the inevitable consequence of the government injecting itself where it doesn’t belong and making everything meaningless and secular.

It’s beginning to show just how harmful rhetoric like Warren’s and the trans lobby’s really is. Last week, the pearl-clutchers in gay media had their panties in a spin when a report was published showing that gay acceptance among 18-40-year olds was actually in sharp decline. As the professional victims saw it, this is just another day in Trump’s America, and they still have much work to do in the name of tolerance and diversity. Of course, what they didn’t realize is that LGBTQ politics has become so insufferable, demented, and aggressive that normal people who once enthusiastically supported LGBTQ people are now having second thoughts — and rightfully so. The study wasn’t about average Americans giving two shits if you suck cock and marry a dude. It was about drag queen storytime, weaponized pronouns, and hauling elderly bakers to the Supreme Court.

And just as everyone thought Big Gay’s mountain of off-putting bullshit couldn’t get any higher, here comes gay reparations. Soaring HIV rates among blacks, youth homelessness, rampant drug addiction, and Islamic terrorism? Those aren’t the concerns of well-adjusted gay people. Well-adjusted gay people attend Democrat fundraisers. They’re married lesbians in Binghamton who are still mad about something, and a fake Indian is coming through with a nice fat apology check. Can she count on your vote?