The gentrification of revolt 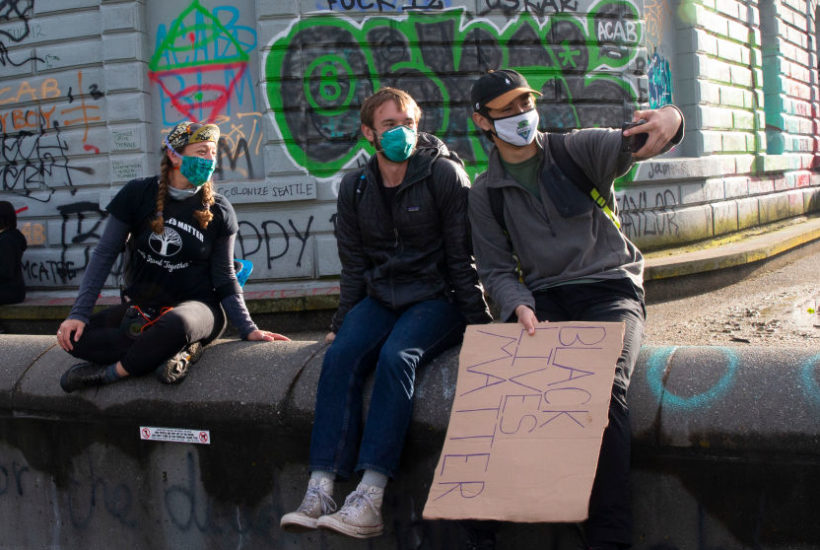 Friends take a selfie in the the Capitol Hill Autonomous Zone (CHAZ) in Seattle, Washington

Does anyone actually remember George Floyd? What started out as a noble cause to curb police brutality in urban and African American communities has morphed into a corporate crusade of ne’er do wells tossing out woke distractions to keep the Instagram millennial mafia off their backs, as well as the looting for likes and posing for photos on the hoods of police cars, all in the hopes of a viral snap for Instagram, TikTok or Twitter.

We’ve seen hordes of entitled white women from Georgetown in Lululemon Yoga gear shrieking at black police officers about their privilege and r/Chapo antifa larpers tearing down statues of Ulysses S. Grant or berating older black people about their history. And let’s not forget that goddamn racist elk statue in Portland. Removing African American logos and symbols (Uncle Ben’s, Aunt Jemina, etc) is up to the companies that choose to do so, but it’s not going to save one black life at the hands of the police or do anything to placate the bloodthirsty mob.

Hollow gestures of corporate solidarity are meant to appease everyone apart from the people living with the every day stigma of police profiling, who couldn’t care less. Nobody asked to remove old episodes of The Golden Girls over mud masks or for white actors to give up their work voicing black characters. But the companies know that if the media and politicians will use a a private citizen in Central Park’s confrontation with a bird watcher as a symbol of systemic racism to distract from their disastrous decades of policies, then they will surely come after a corporate brand of rice or syrup.

We’re not witnessing a movement to reform police departments in urban communities to prevent more black deaths. We’re witnessing the gentrification of revolt by a mob of upper-class white progressives. It’s no longer about black lives. It’s also about biped trans vegan Palestinian lives and that bitch J.K. Rowling. These aren’t the Black Lives Matter riots. There are several examples of actual BLM protestors protecting property from being looted and expelling antifa recruits from attacking their communities. These are the Lululemon Riots. The most selfish generation isn’t doing this for Black Lives. They are doing it for Instagram.

It’s easier to post up a black square online than it is to push for school choice in black communities. It’s easier to hashtag #BreonnaTaylor than it is to mount a public pressure campaign. It’s way more satisfying to get your Hamilton Disney+ placebo on while wearing a Colin Kaepernick jersey than it is to examine economic policies in cities. Hamilton is canceled now too, by the way.

This is all of course enabled by a media which thinks there is a woke romanticism in torching minority owned businesses for viral fame, or securing a six-block radius in Seattle and claiming it’s just a harmless street festival — never mind the two black teenagers were shot, one fatally.

That’s the stuff that doesn’t make it on to Instagram. Black Lives Matters protests overtaken by pasty white kids in bandanas have resulted in more black deaths in recent weeks, but what’s really important is that a professional football team has a name and logo that is problematic to the corporate owner of FedEx. A group of celebrities also made a black and white video, and hey, isn’t that really enough?

Renaming a plaza in Washington DC or painting giant yellow letters down Fifth Avenue in New York outside Trump Tower is the perfect kind of shiny object for the media to focus on. Just keep ignoring the Democrat politicians who have failed these communities over and over again.