Like his son, Bush Sr’s stock rose considerably once he left office 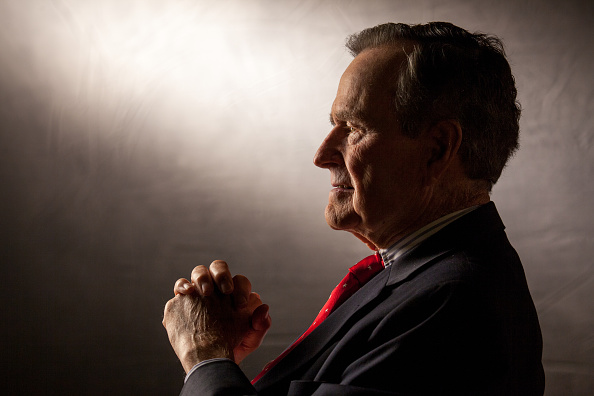 George H.W. Bush, who died on Friday at the age of 94, oversaw the end of the cold war. Together with Secretary of State James Baker and National Security Adviser Brent Scowcroft, he helped to ensure that the dissolution of the Soviet empire and the reunification of Germany took place peacefully. Even as hawks in Washington, DC warned that Mikhail Gorbachev was simply a more nefarious version of his predecessors, Bush ended up embracing him. He represented a realpolitik, a mixture of caution and prudence, that was the obverse of what his son, George W. Bush, ended up practicing as president. Though the right has always awarded the credit for winning the cold war to Ronald Reagan, Bush deserves plaudits for displaying a diplomatic dexterity that would likely have eluded his predecessor.

Bush was the last representative of the Republican old guard. As Sam Tanenhaus has noted, ‘The Bushes do indeed have deep ancestral roots on Wall Street, which ceased to be a site of social conservatism sometime during the reign of the Baptist teetotaler John D. Rockefeller, ‘a money grubber plus a theologian,’ as H. L. Mencken once described him. But Bush-style conservatism isn’t only about upholding the plutocracy. It’s about money as a lubricator of ‘free enterprise’ in the varied forms Bushes themselves have pursued through the generations: banking, oil, real estate, baseball team owning. As this history has enriched the family, it has also broadened its political reach.

Bush was always mistrusted by the right, which correctly saw him as a New England liberal Republican who had tried to don the garb of a Texas conservative. It was Texas where the Yale graduate and former World War II pilot headed out to make his fortune in the oil business. Politics beckoned. Bush became a Congressman, ambassador to the United Nations, head of the Republican National Committee, ambassador to China, and head of the CIA. He had hoped to remain CIA director under Jimmy Carter, but was replaced by Stansfield Turner. It proved to be the making of his political career, as he ran for the Republican presidential nomination, dismissing Ronald Reagan’s economic platform as ‘voodoo economics.’ He claimed ‘Big Mo,’ after he won the Iowa primary, but Reagan regrouped and won the nomination. Bush had to settle for the vice-presidential slot. In 1988 he became the first vice-president to win the presidency since Martin van Buren in 1836.

Bush’s presidency marked the height of American global supremacy. His diplomatic prowess ensured that a reunified Germany remained a member of NATO, a goal that the Soviet Union tried to obstruct almost up to the end of its existence. Bush also launched Operation Just Cause in 1989 to oust the Panamanian dictator Maneul Antonio Noriega, which inaugurated the series of American interventions that would take place in the 1990s, culminating in his son’s invasion of Iraq in 2003.

Bush assembled a global coalition to expel Saddam Hussein from Kuwait in 1991 but stopped short of Baghdad. His son tried to rectify what he saw as his father’s shortcomings and mired America in a disastrous conflict, one that has helped to stir up anti-American feeling in the region and emboldened Iran, precisely as Scowcroft had predicted in an op-ed in theWall Street Journal on August 15, 2002 called ‘Don’t Attack Saddam.’

His 1990 budget deal, in which he raised taxes on the wealthy to help erase the gaping deficits that Reagan had created, was a fateful move that enraged the right. Bush was seen as a ninny, a weakling who had failed to uphold Republican orthodoxy. At the Republican national convention in Houston in 1992, Patrick J. Buchanan, who had run in the primaries against Bush, scored a primetime slot and transfixed the nation with his bellicose talk about reclaiming the country ‘block by block.’ A recession plus a third-party candidacy by Ross Perot, like Buchanan a forerunner of Donald Trump, sealed Bush’s defeat. Bill Clinton, a self-indulgent baby boomer who epitomized much that Bush despised, ousted him in 1992.

Since then, Bush’s stock has risen steadily. First his son’s misadventures helped promote it. Now the advent of the Trump presidency is sure to bathe it in even more of a nostalgic glow.