I’m dreaming of a woke Chr*stm*s 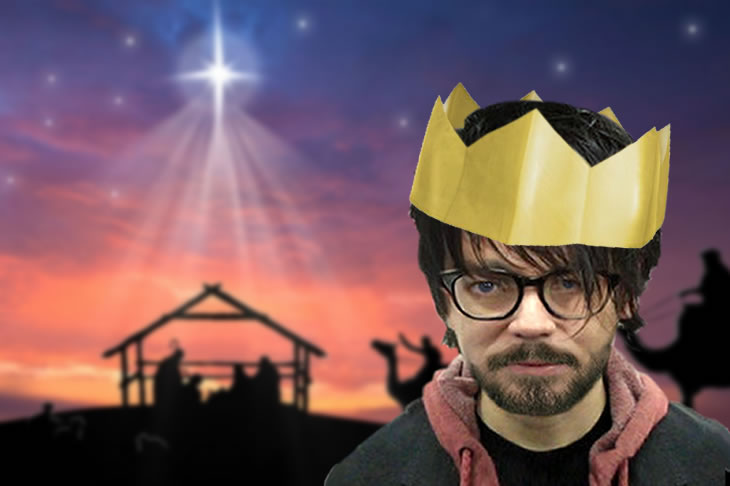 How do you survive the festive season when you have a social conscience? Dear reader, allow me to impart to you my experience with this predicament, and some wisdom along the way.

Once again, the Chr*stm*s season is upon us. Like a virus, it cares not whom it infects and cannot be completely avoided. I choose not to celebrate this holiday, both as a Muslim atheist and a social-justice progressive. Like Th*nksg*v*ng, Chr*stm*s is a toxic symbol of white heteronormative greed. Like the river of evil slime depicted in Ghostbusters II, it seeps insidiously into the fabric of all our lives. This annual feast of corporate gluttony should be rebranded ‘Capitalistmas’, with the traditional tree replaced with a spike of receipts, the gifts wrapped in bank statements and the gift tags made from credit cards driven beyond their spending limits.

As November drew to a close and the onslaught of materialistic merriment neared, I decided to be the change I wanted to see. Instead of allowing a torrent of tinsel-decked bigotry to wash over me, I would counteract this ignorant festival of avarice by volunteering at the Nativity drama at Teeny Tots, a local kindergarten.

My intention was to open the young thespians’ eyes by creating a less problematic, more contemporary Nativity. I would describe Teeny Tots’ email response to my proposal as ‘tepid’, but they did offer to let me help with the lighting and catering. I accepted, confident that once they laid eyes upon my rewrite, they would promote me at once to direct and star in the production.

The rewrite! My task was to reinvent the Nativity as a woke experience for children in a playgroup aged between nought and five, performing for an audience of bigots. I began by making a list of everything problematic with the Nativity, then checked it twice. Satisfied, I set to work. After a long night spent wrestling with my MacBook against the background of a Tibetan mindfulness album (Now That’s What I Call Nirvana, Vol VII), I had literally reinvented Chr*stm*s.

I pulled no punches when it came to representing the lived experiences of today’s minorities. I am their voice and in many ways their salvation; that qualifies me even more than Mel Gibson to retell the story of Jesus the black trans Palestinian and critic of Zionist ethnonationalism. The script emerged from my printer like an illuminated manuscript, only in black and white. I took it along to Teeny Tots that very afternoon.

I cannot say for certain why they chose to eject me from the building. There was too much shouting and jostling going on, not to mention the cries of the children as I was dragged kicking and screaming from the Sleepytime nap session. I suspect my innovative modern take on the birth of Christ may have been a little too progressive for their reactionary handlers.

Perhaps Joseph being a wife-battering, pro-life redneck was a little too near the knuckle for some? Maybe the Angel Gabriel presenting as a nonbinary drag queen who moonlighted as a stripper in order to pay off their cocaine habit was slightly too gritty? Admittedly, I had considered toning this down and changing it to meth, but I am not one to compromise where art is concerned. I make no apologies for that. Not to you, the manager of Teeny Tots, or you, the Portland Police Department.

On reflection, having Donald Trump as the innkeeper refusing Mary and Joseph access to Trump Tower on account of them being Mexican immigrants might have provoked discomfort in the hearts of Drumpfvoting daycare assistants. But that was the point. I cannot be held accountable if the truth cuts through the intolerant like a rusty blade through a vegan nut roast.

I’m fairly positive that the last straw reared its non-recyclable plastic head when I described in detail Mary’s empowering decision to terminate Jesus’s fetus during the final song-and-dance number, ‘Abort in a Manger’. That was when they called security, which just goes to show that women’s control of their bodies is still an incredibly contentious issue.

This setback won’t discourage me from my mission. The grim reaction only strengthens my conviction; not in a legal sense — I would like to stress that I was released with no charges. I have already sent my script to Hollywood and also advised producers in London’s West End to keep December 2020 free.

This time next year, you will all be lining up around the block to purchase tickets for Mary’s Choice. Mark my words.