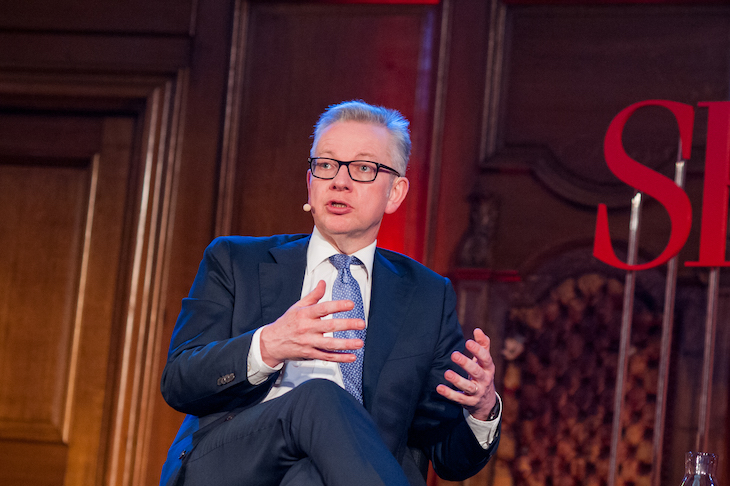 Michael Gove’s positioning in the Tory leadership race became clearer last night. In conversation with Fraser Nelson at a Spectator event, Gove made clear that he would be prepared to extend the Brexit deadline beyond October 31 if there were negotiations going on that would lead to a better deal. He argued that Sinn Fein’s poor recent election results meant that there was more chance of getting the devolved institutions up and running in Northern Ireland if Stormont had a far greater role in the administration of the backstop, which would allay some of the DUP’s concerns:

‘I think that there are ways in which we can work with the Irish government in order to ensure that we either need never go in. Or, if we are in, that it can very quickly be superseded and I’ve had conversations with people on different sides of the Irish border. I believe there is room for movement…

‘If we get the institutions back up and running in Northern Ireland the nationalists will be involved in the administration of Northern Ireland. That will make it easier for us to get those alternative arrangements in place and to provide security to border communities and also to ensure that we can have both the safeguarding of the Belfast Agreement but also the economic benefits that have flowed since then.’

Gove committed himself to having a political negotiating team, saying that the government had relied too much on the Whitehall machine in the Brexit talks. He criticized the current government for too often treating leaving the EU as ‘an instruction in its aunt’s will’ that it had to carry out ‘but is a bit of a pain’. He said that those who talked about defaulting to no deal lacked confidence in Britain’s ability to negotiate a better deal. But, perhaps, Gove’s most effective moment on Brexit came when he picked up an audience member who said the deal would leave Britain a ‘vassal state’.

Gove argued that this kind of language was demeaning the debate:

‘I think the phrase “vassal state” is one that was appropriate for countries that were occupied by foreign powers in the Second World War and in the Cold War. I think it demeans language to use a word like “vassal state”. But the key thing is we would not be a vassal state. Norway is not a vassal state. Switzerland is not a vassal state and we would have had more freedom and more independence than either Norway or Switzerland. One thing. Just a second sir. One thing that I think is wrong about the debate is people use words like “vassal state” and “treachery”, “traitor”.  William Joyce Lord Haw-Haw was a traitor. You are not a traitor if you disagree with me about Europe. You are a patriot who expresses a different point of view.’

One striking theme of this evening was how keen Gove was to cast himself as a liberal. He repeatedly described himself as a ‘liberal Conservative’ and a ‘liberal Brexiteer’ and said that one of his ambitions as Prime Minister was to make this the most admired country in the world by the ‘liberally-minded’:

‘In the past you might have boasted about the strength of our armed forces or the reach of our empire. What we can show in the next century is moral leadership. And we can do that by showing, for example, that our education system our approach towards children and care means that if you were a child born in any country, whatever your parentage or background, you had more chance of being supported and succeeding in this country. I think that mission will mean people will look at our country with renewed admiration and we will feel pride in it. And I believe that as I say the L word is not a dirty word.’

On the economy, Gove had a pop at ‘one club golfers’ who think that the answer to every problem is a tax cut. He argued that today’s economic problems are not the same as the 1970s, and need a different set of responses including some Teddy Roosevelt-style trust busting:

‘My view is that choice, competition, and free enterprise drive the economic growth that we need in order to provide people with jobs opportunities and fund generous public services. But what we need to do is to recognize that within the market there can sometimes be a tendency – and a number of economists and a number of politicians have recognized this over time – for cartels to form. For crony capitalists to shut out competition. And I believe that the role of government is standing up for the disruptors, the new innovative industries and technologies that will generate jobs in the future…What we need to do is to make sure that we have an economic system that provides a reward for risk, that makes sure that people invest back in that company in training the workforce and in capital, rather than creaming some of that money off in share buybacks and other schemes.’

There was, predictably, some tummy tickling for Tory MPs from Gove. He committed to the Tory parliamentary party being his policy unit and said that he wanted a Cabinet that brought on new talent as well as bringing back those who had previously served in government. In other words, everybody.

‘I think that we’re very lucky in the Parliamentary Conservative Party that we have a lot of talent and one of the things that I’ve been concerned about in the past is that we haven’t made the most of all the talent that we have. So my view is you know some politicians have policy units and think tanks that they look to… My view is that the Conservative parliamentary party should be our policy unit, our think tank, and that we should make use of the talents of the men and women who put themselves forward for public service.’

This evening was a reminder of how Gove is running to be the candidate of the liberal wing of the party in this contest. This approach is, so far, doing well in terms of delivering him the parliamentary votes he needs to make the final two. But it is not a natural pitch for the members round of the contest.