How are the mighty fallen

The Life and Death of Ancient Cities: A Natural History by Greg Woolf reviewed 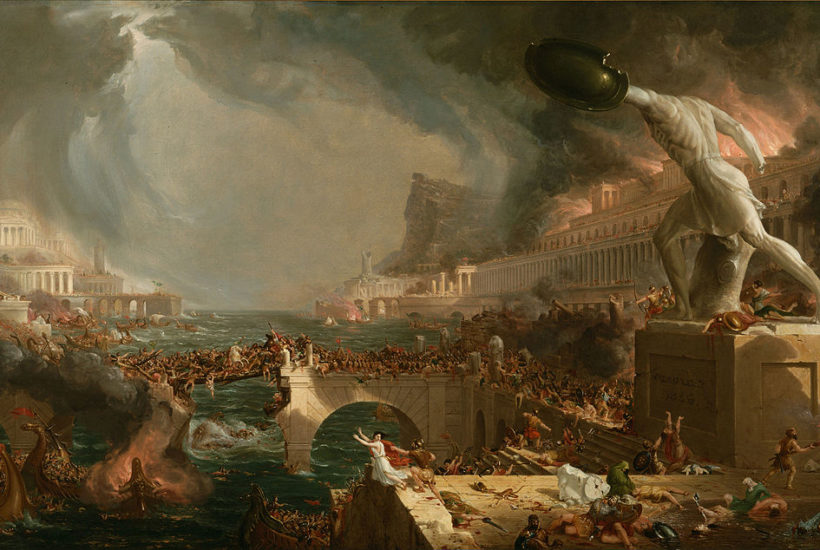 ‘The Course of Empire’ by Thomas Cole

The Life and Death of Ancient Cities: A Natural History Greg Woolf

Greg Woolf didn’t know his book would come out during an urban crisis. Thanks to coronavirus, Venice’s population, for example, is now somewhere between 25,000 and 40,000 — the lowest for centuries.

Horrific pandemics were nothing new for ancient cities, which, as this scholarly book shows, have gone through heady rises and catastrophic falls. Rome had a population of nearly a million under the Emperor Augustus. By the sixth century AD it was down to 10,000. Troy, one of the great Bronze Age cities, was buried by the time Byron visited: ‘Where I sought for Ilion’s walls, the quiet sheep feeds and the tortoise crawls.’

Still, plenty of cities have staying power. Athens has been continuously inhabited for nearly 4,000 years, and Rome, Naples, Marseilles and Alexandria are all well over 2,000 years old. Even so, the overwhelming feeling one has on reading this sobering history is how fragile cities are, and how vulnerable to invasion, economic collapse and, of course, rampant disease.

Despite this fragility, mankind has moved steadily towards them. Today, half of us live in them — but why exactly? The British Prime Minister once said it was because ‘there are more fucks in the city’. Statistically, Boris Johnson must be right. But if you’re looking for a longer argument this is the book for you.

The creation of the city was a haphazard, centuries-long affair. It depended on humans deciding to farm in a methodical way on a single spot. Enough military and economic command of the surrounding countryside was also needed to produce the supplies required to provision such a settlement.

Woolf, the director of the Institute of Classical Studies, convincingly argues that, although the Mediterranean basin was the cradle of Egypt, Greece and Rome, its ecology was so shaky that it made urbanism risky. That’s why ancient European cities tended to be so small. Troy covered only 20 hectares, with a population of 10,000 at most. Mycenae, Agamemnon’s heart-stopping hilltop base, was the size of a modest Cotswold village. Exceptions to the rule such as Rome needed vast empires to sustain their hectic growth. But it wasn’t just the Mediterranean that produced ancient cities. They sprouted independently in northern China, the High Andes, the forests of the Yucatan peninsula and Thailand, inter alia.

There’s no magical date when the city materializes, but farming gets going between 10,000 and 5,000 BC in Eurasia, Africa and the Americas. The best candidate for the earliest city is Uruk, now in Iraq, in the fourth millennium BC. Miraculously, the world’s oldest narrative poem, The Epic of Gilgamesh, written c.1800 BC, tells the story of life there. In Andrew George’s translation:

‘Climb Uruk’s wall and walk back and forth! Survey its foundations, examine the brickwork! Were its bricks not fired in an oven? Did the Seven Sages not lay its foundations?’

Urbanism also blossomed in Egypt in the fourth millennium BC, and then prospered in Bronze Age Greece. The Aegean at that time was a seething Petri dish of cities, including Troy, Pylos, Athens and Corinth, while Crete, most famous for Knossos, was also home to a dozen other significant settlements.

There’s a mystery behind the most significant urban development of all time — in Greece from around 700 BC. Homer, thought to be composing the Iliad around then, refers to numerous cities, including the ‘strong-founded citadel’ of Mycenae and ‘wide-streeted’ Troy. Obviously he was describing the Trojan War, thought to have taken place c.1200 BC, but presumably he was also depicting the urban world he knew. The Greek colonies of Sicily began in 730 BC. And it is through the creation of these cities and states that politics (from polis) was formalized and fine-tuned.

Rome, the greatest of all ancient cities, emulated these earlier settlements. Starting life as a Latin-speaking collection of hilltop villages, it was full of Greek traders and gods. The wise Roman move was to sponsor settlements (coloniae) for Roman citizens to farm, and to create its empire-building army. A super-boosted urbanism across the empire led to the peak of Roman city life somewhere between 150 and 250 AD.

But then came decline and fall. As Constantinople expanded in the fourth century, Rome shrank. A huge tsunami in 365 caused devastation from Greece to Alexandria. The Goths sacked Rome in 410. If it’s any comfort, the mighty city succumbed to factors a lot scarier than coronavirus.