After the waiting, the barbarians arrive 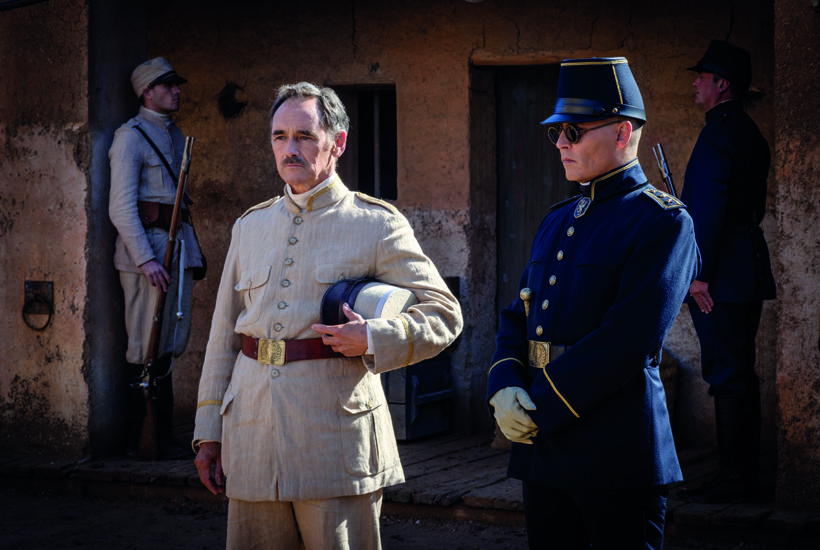 The empire strikes out: Mark Rylance and Johnny Depp in Waiting for the Barbarians

Waiting for the Barbarians

Every civilization needs its barbarians. Lazy, filthy, dumb and dangerous, the barbarian, real or imagined, is the eternal grindstone on which the civilized sharpen their prejudices. They are, as the Greek Alexandrian poet Constantine Cavafy wrote, ‘a solution of a sort’ — but to what?

In Cavafy’s poem ‘Waiting for the Barbarians’ (1898), an unnamed city is gripped by cultural torpor and political sloth. The gridlocked citizens, weakened by indolence and luxury, dream of a bloody release from their troubles. Disaster, a visit from the barbarians, becomes their last hope for rebirth. You don’t need to be a specialist to see the parallels between the poem and the illicit undercurrents of politics in the 2010s. In his own time Cavafy influenced a select group of high-minded admirers: T.S. Eliot, E.M. Forster, Arnold Toynbee. Later, J.M. Coetzee borrowed more than a title from Cavafy for his allegorical novel Waiting for the Barbarians (1980). Now the novel has become a film, scripted by Coetzee and brought to the screen by the talented Colombian director Ciro Guerra.

A magistrate (Mark Rylance) quietly fulfills his duties on the sluggish borderlands of the empire. He collects taxes, administers lands and presides over a court. He thinks himself benign, a gentleman. His pursuits are civilized (antiques, classical literature), his pleasures jadedly sensual (brothels, hunting). This gentle existence is shattered by the arrival of Colonel Joll (Johnny Depp).

Joll is a military policeman from the Third Bureau of the Civil Guard. He is assertive, expansionist and looking for trouble. The barbarians, he fears, are mustering up in the mountains and must be extirpated before they are strong enough to attack the Empire.

Whether or not the barbarians are out there is moot. Joll, a ‘doctor of interrogation’, will get what he wants. He sees any slackness or neglect of duty as degeneration, a slide towards Spenglerian decay. Joll is the proverbial man with a hammer.

Though this is his first English-language film, Guerra is in familiar territory. His breakthrough, Embrace of the Serpent (2015), is a Conradian road movie where the road is the Amazon. Embrace follows one of those oddball Central European polymaths who appear so often in stories of empire (Christian Gottlieb, Alexander von Humboldt, Paweł Strzeleki), this time in pursuit of the mythic Yakruna flower. Beautifully shot in 35mm to resemble Daguerreotype photography, Embrace was the best film about the Amazon since Werner Herzog’s Fitzcarraldo (1982). Guerra made a genuine contribution out of familiar materials: missionaries, madness, treachery, cannibalism. Unlike Herzog, Guerra pulled it off without goading the indigenous people into burning down his set.

Waiting for the Barbarians shows that Guerra can handle a bigger budget and bigger stars. Robert Pattinson is Officer Mandel, Joll’s subordinate, who is responsible for breaking the magistrate after he elopes with a barbarian girl (Gana Bayarsaikhan). Pattinson has been on an interesting trajectory since his Twilight days. Rather than embracing stardom like previous heartthrobs, he’s leveraged it to work on unusual pictures with David Cronenberg and Claire Denis, among others. His Mandel is athletic, handsome and domineering. Like Ronald Merrick in Paul Scott’s Raj Quartet, he has grown cruel in the imperial hothouse.

When shocking things happen to the magistrate and the town he governs, you remember that you’re in Coetzee’s hands. Reduced to dialogue alone, Coetzee remains a punitively moral writer. As a young academic he was fascinated by the bleaker aspects of Samuel Beckett’s works. A dark river flows through his best novels: Dusklands (1974), In the Heart of the Country (1977) and Disgrace (1999). His old, learned and skeptical white patriarchs lust after black women. Coetzee doesn’t spare the men, and he doesn’t spare the magistrate or the Empire in Waiting for the Barbarians either.

Coetzee’s vision of empire has no room for aqueducts and railways, or trade and sanitation, or the ironies, confusions and mishaps of imperialism. For Coetzee, torturers like Colonel Joll and humanitarians like the magistrate cannot be separated. The sufferings and drubbings endured by a furrowed, ragged Rylance are deserved. They are Western civilization’s debts to history, and they will be paid. Guerra’s skill, and Coetzee’s too, is to make this suffering moving.

In Cavafy’s poem and Coetzee’s novel, the barbarians never arrive. They stay camped out in the desert or the tundra, sharpening their flints and grievances around the campfire, and our reckoning is postponed while our stagnation endures. It is a sign of the times that Guerra’s film ends differently.