Is the handshake ready to bow out?

The advantages of bowing, apart from the public health benefits, are that it is dignified and solemn 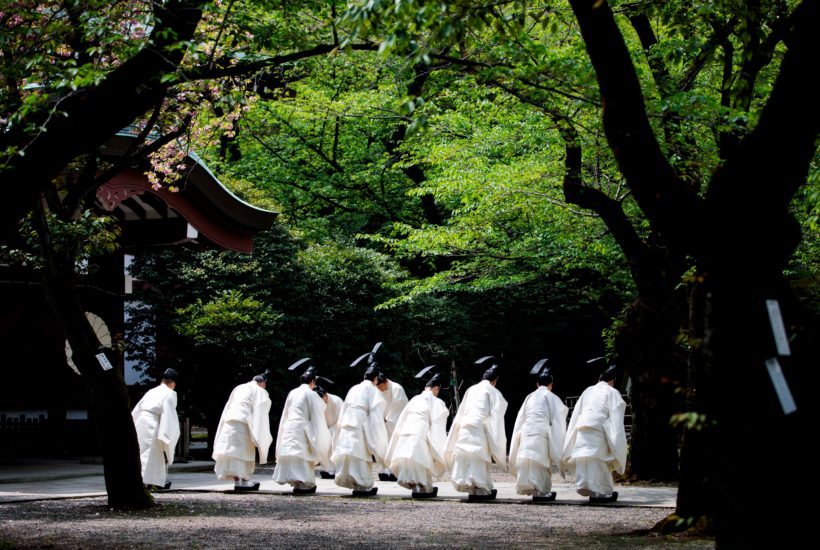 Freemasons beware — the traditional handshake may be the latest victim of the coronavirus, canceled in our post-pandemic quest for a sanitized contactless future.

According to testimony before Britain’s science and technology select committee, in the interests of public health, the good old-fashioned grip and grin should be replaced with the chaste but benign Japanese tradition of bowing.

Baron Peter Piot, a professor of microbiology at the London School of Hygiene and Tropical Medicine, told peers that ‘handshakes are probably out forever’ before citing socially distanced cultural greetings, such as bowing, as more suitable alternatives.

Piot was probably inspired by his own experiences of Japan, with which he has a long connection. He received of the Order of the Rising Sun (Japan’s equivalent of a knighthood) in 2018, an occasion when the deepest bow would have been appropriate.

In his testimony, Piot speculates that contactless greetings, such as the bow, may have developed as a means of avoiding pandemics, which makes you wonder why this didn’t happen in a Europe with its long history of plague and pestilence.

The exact origins of the bow in Japan are lost in the fog of history but it is generally assumed to have been a samurai custom, derived from ancient Buddhist origins, and intended then, as now, to show respect and piety, and as a marker of rank or class.

It seems to have spread to the general populace in the Edo era (1603-1868) and became more sophisticated at this time, with strict rules and variations added to denote subtle differences in status between the parties. There is an echo here of the codes of chivalry developed during the early medieval period.

Nowadays the bow is ubiquitous and habitual. It is used as a salutation, apology, sign of reverence, or in religious or business situations. It is a fundamental aspect of Japanese etiquette and as natural as breathing to the people of the world’s most polite country.

The advantages of bowing, apart from the public care benefits, are that it is dignified and solemn, adaptable to different situations, and though it is alleged that women bow more often than men, largely gender neutral (the only differences between the sexes is the position of the hands).

It is also less open to abuse than the handshake. Whereas the petty tyrant can impose his authority with a menacing vice-like crush, and the would-be seducer discomfort his target with a sly caress, there’s not much scope for ‘manipulation’ with the simple bow.

The Japanese do sometimes take things a bit too far, though. I’ve seen cleaning staff bowing to an empty train, elevator girls to an unoccupied lift, and instinctive bowing on the phone is quite common. So painstaking are the Japanese that companies even employ trainers to teach the intricacies of bowing etiquette, and in the past used a special training device to help staff master the three specific angles of the body appropriate for different circumstances.

And it is easy to make a mistake (as President Obama learned when he overdid it with a 90-degree bow to Emperor Akihito in 2009) causing momentary embarrassment. President Trump avoided potential embarrassment by shaking the hand of Emperor Naruhito on his visit to Japan last year.

All this fussy detail can lead to problems for the locals too. A particular issue with the farewell bow is knowing when to stop. I once saw two old ladies locked in an agonizing nodding war at a train station, with neither able to disengage first for fear of giving offense. It looked like a pair of those drinking bird dolls that bob up and down endlessly once set off.

If we do become a nation of bowers rather than shakers, it is unlikely we will incorporate quite the Japanese level of sophistication into our newly acquired social custom. Most likely a far more casual, slouchy variant will emerge, which we will embrace — no not embrace — but welcome as eagerly as we have our own versions of other Japanese originals, like gas station sushi, ramen noodles or Marie Kondo’s tidying techniques.

But I do hope we incorporate one of Japan’s most distinctive bowing rituals — the ‘dogeza’ or bow of culpability. After some scandal of embarrassment, the heads of the shamed company or institution are made to apologize publicly and perform a deep group bow, the speed and angle of which is set in advance by a professional bowing choreographer. It is so humiliating for the participants that its dread prospect is a powerful disincentive to negligence or corruption.

How satisfying if it would be if after the completion of the coronavirus inquiry, those held responsible for the gravest misjudgments were made to stand in a line and perform the ‘dogeza’ before the nation’s people.